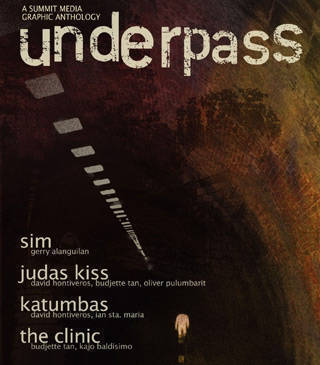 Underpass: They want to scare you

A sneak peek into the dark world of Underpass, a new graphic novel featuring some of the most noted names in the Philippine comics scene

They want to scare you.

Creeping down into a world inhabited by murderers, demons, ghosts and other members of local lore, Underpass mixes the familiar with something new, says Budjette Tan.

"We have always heard about the haunted house at the end of the street…we've all heard of manananggals and kapres," says Tan, "so it's a question of how [to] tell these stories in a new way, in a different way, and place [them] in a familiar setting, not anymore in the province, not anymore in a house where a manananggal [would] come and break through the roof."

THE SIM
Gerry Alanguilan, on his story, The Sim: "Let's just say that one day I picked up a sim [card from] the floor of a tricycle and I [wondered] what I would see if I put that sim in a cellphone, and this is how the story came out. I don't want to say that my story is based on true-to-life experience, but [just let me] say that I am here, alive, to tell you the story."

JUDAS KISS
David Hontiveros on Judas Kiss: "It was originally a short story which was written for an anthology that never got published, so when Budjette came up with the idea for Underpass we decided we'd adapt it into comic book form. And it incidentally got me to collaborate for the third time with Oliver [Pulumbarti]. So there's a ghost, there are murders, and there is a twist."

"It's so scary that Oliver had to take a step back before finally drawing the pages," says Budjette Tan.

KATUMBAS
David Hontiveros: "[It's Ian Sta. Maria's character, but] I wanted to lay down the foundations of the…idea of hell in this world, the idea of condemnation, of souls being punished."

THE CLINIC
"It's a departure from the usual Trese sory that Kajo [and I] have been doing…It's all about an upcoming starlet who discovers she's pregnant and her manager tells her you need to get an abortion. And they go to a very special clinic where they discover a different side of showbiz."

Spot.ph: In a way, Underpass might make readers confront their worst fears. What is your worst fear?

Oliver Pulumbarit: Worst fear would be, maybe the popularity of stupid politicians. And unflushed toilets.

Budjette Tan: Greatest fear would really be deadlines which we don't get to beat. Thankfully I have not experienced a supernatural occurrence and I'm happy to just write about it and not experience it.

David Hontiveros: My greatest fear…having to answer questions like that. [Laughs] I've been into horror since I was a little kid so I don't really think I have one, a lot but not a singular one.

Budjette Tan: What do you mean phones? Why are you afraid of phones?

Underpass, P175, is available wherever Summit Media magazines are sold.

Graphic Novel
Your Guide to Thriving in This Strange New World
Staying
In? What to watch, what to eat, and where to shop from home
OR
Heading
Out? What you need to know to stay safe when heading out