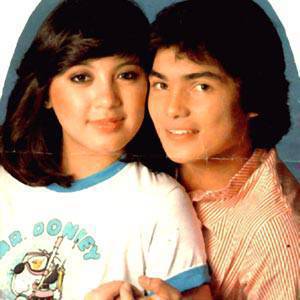 SPOT.ph blogger Ria Limjap on Sharon vs. Gabby at the MMFF, and the secret plot for their dream reunion movie.

I dragged my semi-sick ass out of bed for the first time since Christmas Day to watch not one but two movies in a day: Mano Po 6 from Regal Films and I Love You Goodbye from Star Cinema. I came prepared with my trusty Indian shawl to ward off the cold and a flask of fresh salabat for my throat.

So I coughed and shivered through I Love You Goodbye, a romantic drama directed by Laurice Guillen, starring Gabby Concepcion as an established doctor who falls for a younger woman played by Angelica Panganiban. Gabby's daughter (Kim Chiu) doesn't like her dad's girlfriend and when she brings home a new guy (Angelica's real life boyfriend Derek Ramsay) it turns out that he is the ex boyfriend of Angelica. Basically, it's a love square. Gabby loves Angelica, who loves Gabby too but may also still be in love with Derek, who pretends to be interested in Kim to get to Angelica.

The good news is that it's not all that bad. Angelica Panganiban can cry on cue and she is surprisingly easy to watch. Her chemistry with Derek Ramsay is palpable on screen, it's too bad that her scenes with Gabby feel strained and wooden. Kim Chiu is a revelation–she's gorgeous and vulnerable, perfectly cast as the shallow and spoiled daughter who only wants her father's attention.

And Gabby Concepcion? He's actually a better actor now–still good looking but with a bit more emotional depth that speaks of maturity and life experience. He will never be a character actor but at least now he's more than a matinee idol from the '80s. And KC's dad.

Some bright spots: aside from Kim Chiu's delicate porcelain beauty, I Love You Goodbye has a great supporting cast. There's Ketchup Eusebio who I think could be the new Dolphy, Matet de Leon who is typecast as the plain best friend but provides a warm and authentic character for the movie, Liza Lorena looking fabulous in a purple muumuu as Gabby's rich and snobbish mother, and the lovely Angel Aquino almost playing herself as the kind, beautiful, sophisticated, and intelligent ex-wife.

My essential problem with I Love You Goodbye–aside from the overly florid musical score that made me want to tear my hair out and an unfocused camera–is that it struck no emotional chords with me. Not a single kilig moment. Not a single tear. Call me jaded–you won't be the first–but that's the truth.

Then I shivered and coughed through more than two hours of Mano Po 6. Joel Lamangan, respected and established director of film and stage, does his best to deliver this epic inter-generational drama, starring Sharon Cuneta as a Filipino-Chinese woman whose children are taken away from her by her mean in-laws. The children grow up apart from their mother and learn to hate her, but in the end a mother's love triumphs over all evil–nasty in-laws, abusive boyfriends, even the illegal sindikato. She is the Megastar, after all.

Meanwhile, Zsa-Zsa Padilla is truly awesome as the evil mahjongg playing Aunty Olive. She barges into the kitchen screeching "Na san ang Pei Pa Koa ko!?" And Heart Evangelista, whom I had never really seen in a serious role, practically glows as the cold-hearted daughter Stephanie. I would really like to see her in better films with better roles.

(Apparently my coughing could not drown out the comments from the hilarious gay peanut gallery sitting in the back row. When Sharon gets shot in the back by a drive-by shooter on a motor bike, someone behind me gasps. "Anyway mataba naman si bakla so carry na yan!" True enough, she miraculously survives.)

But again I found myself unmoved by this Chinoyserie melodrama with lots of unwarranted slow motion and color graded flashbacks. I am aware that they pulled out all the stops: special participation from Kris Aquino and Christopher De Leon, special scenes shot on location in Beijing, sampalan, sigawan, iyakan galore–but still it felt like formula being shoved down my scratchy throat.

Don't get me wrong. I heart Sharon (and Gabby!). I would really love to see them in films that have well developed story lines and high production values.

A couple of weeks ago, I was roaming around the fluorescent-lit hallways of ABS-CBN with my friend Paula Nocon. After ogling the celebrity portraits on the walls, we ended up squatting in an empty dressing room inevitably talking about our fantasy Sharon-Gabby reunion movie.

"KC should be in it. And maybe Piolo. Pang sub-plot romance," I said.

"Dapat may kilig factor," she insists.

"Sure. Basta someone has to die. No happy ending. Bittersweet dapat," I replied.

So Sharon plays an overweight, chain-smoking, hardened businesswoman who eats her feelings. The one bright spot in her life is her beautiful daughter who is getting married to a nice guy. In the midst of wedding preparations her feckless ex-husband comes home after years of boozing and womanizing abroad to walk his only daughter down the isle. Sharon is forced to face her ex for the sake of her daughter. They declare a truce. The wedding proceeds smoothly. End of Act One.

A day after the wedding, the exes have lunch. Sharon expects Gabby to leave for the US but he reveals to Sharon that he's dying and that he wants to die in the Philippines. He asks Sharon to help him put his affairs in order.

Montage: days pass and they fall in love all over again. Only this time there's more understanding and compassion for each other. There could be a lot of kilig factor in Sharon nursing a sick Gabby back to health. But it's too late. He's dying and she's losing the only man she ever loved…

It could be very human and funny and sad. And wouldn't it be fun to splice it with scenes from their old movies?

Quick, someone steal our story. I don't care. Just do it. But please do it right.