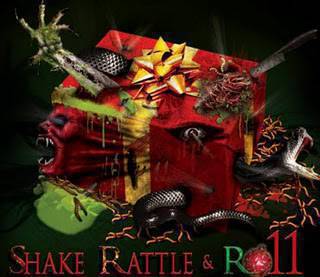 Our SPOT.ph blogger on "The biggest fright-fest of the season."

The top performers at the 35th Metro Manila Film Festival are all based on fantasy: Ang Panday, Ang Darling Kong Aswang, and Shake, Rattle, and Roll XI. I'm not watching Panday because I honestly think senators should not play sword-wielding heroes in fantasy movies–best actor or not. I'm not watching Ang Darling Kong Aswang because I saw the trailer a few months back and I'm pretty sure that's all I need to see. So I went to see the eleventh permutation of SR&R, which is, after all, a grand tradition in Philippine movies.

Since 1984, this horror franchise has sent shivers down our spines. Directors such as Ishmael Bernal and Peque Gallaga have directed segments for early versions; great actors like Joel Torre, Gloria Romero, and Gina Alajar have starred in various episodes. Who can forget Janice de Belen and the murderous refrigerator? There is no doubt that Shake, Rattle, and Roll has become part of the pop culture lexicon. In our little horror film, Ang Pamana: The Inheritance, director Romeo Candido wanted to have the retarded character wear a Shake, Rattle and Roll t-shirt–homage, you understand–but somehow we couldn't get permission from Regal Films or something. Naturally, we didn't want to piss off Mother Lily. I mean, who wants to needlessly provoke the dragon lady of Philippine show biz? At the recently concluded awards night for the MMFF, Panday won best film (based on box office returns and audience popularity so, honestly, it doesn't say much) but Mother Lily apparently wanted the jury to reveal how they came up with their decision.

From demonic possession to Filipino folklore–oh, and don't forget cursed bridal gowns–SR&R is the biggest fright-fest of the season.

The first episode, "Diablo," directed by Rico Gutierrez, is about a young doctor named Claire (Maja Salvador, whom I would really love to see cast in better roles) who stops believing in God when her family is murdered in front of her as a child. She starts seeing demonic visions and she becomes possessed (and yes, their version looked pretty scary in a gruesome art school kind of way). Her super religious aunt (Gina Alajar) calls upon the help of Father Ronnie (Mark Anthony Fernandez, who is way too cute for a priest) to help exorcise the demons inside Claire. Smart of them to employ all the scare-inducing ingredients for a classic possession story: the creepy Catholic imagery somehow always does the job, also scary dolls, weird voices, and lots of prosthetics. Even smarter of them to use the devil and possession as the ultimate scare tactic because it taps into our deep seated collective fears as a Catholic nation. After all, we were subjugated by the Spanish colonizers with images of   hell.

The second episode, "Ukay-Ukay," directed by Don Michael Perez, is about a bride-to-be (Ruffa Gutierrez) who finds a vindictive vintage wedding dress which won't allow her to marry. People start dying around her–well, actually just the poor seamstress who has to work on the repairs and the gay designer–and she starts having nightmares. It's a bit convoluted and cheesy, but for sheer kitsch "Ukay-Ukay" is fun. Where else can you find a scene like this: haunted bridal gown tries to kill bakla. "Fashion designer ako, gown ka lang!!!" he screeches. Plus Ruffa looks super fab, never mind that she can't act.

"Lamang Lupa" is about–you guessed it–malicious elemental spirits wreaking havoc on a bunch of hapless teens camping in the forest. Directed by Jessel Monteverde (Mother Lily's nephew and also a commercial director), this segment has the tightest story and decent cinematography. A young girl (Jennica Garcia) is brought in for questioning by authorities. In flashback, she reveals that her friends have been killed off one by one by lamang lupa, creepy little forest creatures that make mounds that you're not supposed to piss on. And while Iya Villania running around the forest in short shorts is not my idea of scary (or fun), she is slightly better now as an actress. Meanwhile, I'm putting my money on Jennica Garcia–she's got something there, I hope she gets some good work. Poor girl, she ends up with the lamang lupa in her tummy. So I guess that would make it lamang tiyan? Watch out, it might end up in next year's Shake, Rattle and Roll.

And to get all those ugly visuals out of my head, I went straight home and watched The September Issue.

Happy New Year, everyone. Stay safe and away from firecracker accidents. 2010 is going to be an amazing year, I know it.

Click here to see where Shake, Rattle and Roll XI is showing.

Shake Ruffa Gutierrez Metro Manila Film Fest Shake Rattle And Roll
Your Guide to Thriving in This Strange New World
Staying
In? What to watch, what to eat, and where to shop from home
OR
Heading
Out? What you need to know to stay safe when heading out