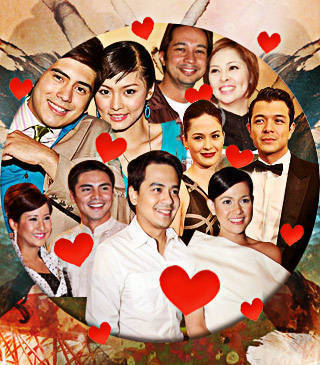 In honor of the month of love, SPOT.ph lists our top 10 onscreen sweethearts in local showbusiness.

Stars may come and go, but a great love team is forever. It is almost impossible for the Philippine entertainment industry to survive without "love teams" on the small and big screens, essential elements for delivering the ratings and attracting advertisers. Very rarely can any new star be launched to stardom without the requisite love team with which fans can readily identify them to be part of. And if a pair clicks, oozing the kilig factor and all,   ding ding ding cry the movie tills–jackpot!

But for many Filipino viewers, love teams are considered more than just a commercial product, toeing the line between reel and real so that audiences are intrigued enough to ask, "Are they or aren't they (together)?" And more importantly, curious enough to tune in or shell out for a movie ticket.

SPOT.ph thought of 10 local on-screen sweethearts who captured the hearts of Pinoy audiences through the years (in no particular order): 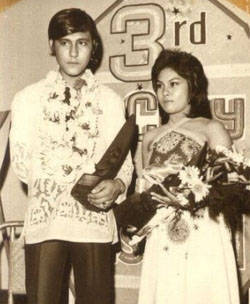 First appeared together in: The Musical Teenage Idol

Love team appeal: It seemed like a case of east meets west. The guy named Tirso (Pip), blessed with fair skin and aristocratic features, was paired with Nora (Guy), a traditional kayumanggi and dalagang Pilipina. And what appeared to be an odd pairing at first turned into a phenomenon. In the '70s, they ruled the box office. And even Maria Leonora Theresa, the doll Pip gave Guy became a pop culture sensation. Talk about iconic.

Memorable movies/shows together: Tell Nora I Love Her; Young Love; And God Smiled at Me; Guy and Pip; Till We Meet Again; The Young at Heart; Always in my Heart; My Little Brown Girl; A Gift of Love; My Blue Hawaii; and Winter Holiday.

Why we liked them: They were the proud parents of a life-sized doll that spawned a hit song! This couple was way ahead of Brangelina, if you ask us.

First appeared  together  in: The Sensations

Love team appeal: Like a breath of fresh air, the Vi-and-Bot love team radiated genuineness in every sense of the word. As onscreen partners, they were a perfect fit for romantic comedies because of their collective sunny and comical charm. As off-screen sweethearts, they were pure, happy, and accessible–the kind of characteristics that make up an effective love team. And says an older fan: "Nakakakilig kasi totoo sila."

Memorable movies/ shows together: The Sensations; My Darling Eddie; Jukebox King; Young Love; From the Bottom of my Heart; I Love You, Honey; My Pledge of Love; Renee Rose; Songs and Lovers; Dama de Noche, Don't Ever Say Goodbye; and Leron Leron Sinta.

Why we like them: They did 14 movies together in one year, probably a record for any love team. 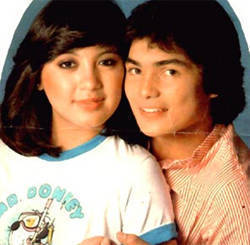 First appeared  together  in: Dear Heart

Love team appeal: They had it all–the name, looks, fame, good diction, and the perfect onscreen partnership that had the "X factor." Gabby Concepcion and Sharon Cuneta were the '80s movie power couple. Their pairing-up was a box-office force that translated into record sales. Sure, reel love turned real. They tied the knot in 1984, which was a dream come true for their fans. But problems got in the way. Their love story was cut short–both on and off screen. Decades later, the clamor for a Gabby-Sharon comeback remains strong.

Why we liked them: They were the only two people who could understand each other's burgis-speak (or pronounce each other's names correctly) in Dear Heart. How could they not belong together?

Sharon and Gabby in Dear Heart 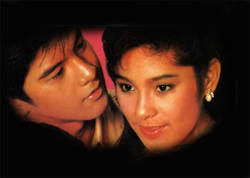 First appeared  together  in: That's Entertainment

Love team appeal: Nostalgia at its finest, the love team of Romnick Sarmenta and Sheryl Cruz was one of the hot items from the years 1988 to 1992. Both started out as young stars until they were matched up to be an onscreen couple in their adolescence. They had the chemistry–the kind that was enigmatic but was still comprehensible. Like other love teams, they fell in love, but eventually broke up. Fans appealed for reconciliation. Sadly, such only happened on television. Now, that's entertainment.

Why we liked them: He got through her mataray façade. Surely he deserves props for that. 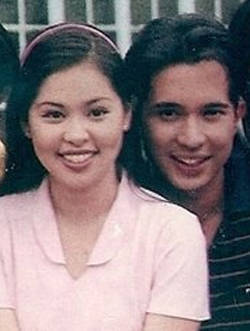 First appeared  together in: T.G.I.S.

Love team appeal: Who could ever forget Wacks (Bobby Andrews) and Peachy (Angelu de Leon) from the '90s youth-oriented drama series, T.G.I.S? The hit show made this small-screen love team click. They seemed very real in reel life. And their portrayal of two people dealing with the usual relationship issues was so authentic that watching them became the perfect weekend tambay for teens of their generation. They worked so well, they put Stephen Bishop's '80s hit "It Might Be You" back on the radio charts.

Why we liked them: She already had one food-inspired nickname, but somehow, we didn't cringe when he gave her another one (Pancakes). 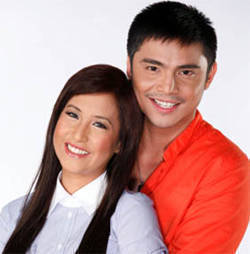 First appeared  together in: Gimik

Love team appeal: Marvin Agustin and Jolina Magdangal had exceptional chemistry and their team-up had mass appeal. They were real and reachable. And both were very casual and natural, which was very reminiscent of the Maricel Soriano-William Martinez tandem in the '80s. Though their off-screen romance was short-lived, their charm as an onscreen couple continues.
Memorable movies/ shows together: Gimik; F.L.A.M.E.S. the movie; Radio Romance; Kung Ayaw mo, Huwag mo; Labs Kita, Ok ka Lang; Hey babe; and Labs ko si Babes.

Why we liked them: One word: Babes. 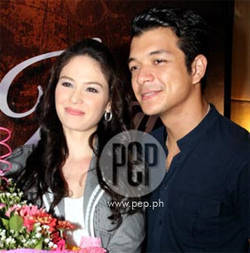 First appeared  together  in: Pangako Sa 'Yo

Love team appeal: The Echo-Tin love team was a perfect match. Both fall under the categories of hot, gorgeous, and talented. They were such a beautiful couple onscreen that their fans hoped for the reel love story to translate to real life, which it eventually did. And with that, the "kilig factor" was brought to a much higher level. Ratings for their prime-time television shows went up. Their films were box-office hits. Fans rejoiced, along with their home network. The Echo-Tin magic was so strong that even after they called it quits in their real-life relationship, the clamor for a reunion (both on and off-screen) did not stop. They've since reunited, but only onscreen.

Why we liked them: With the ex-lovers' undeniable chemistry, it sure didn't seem like six years flew by since their last primetime pairing. 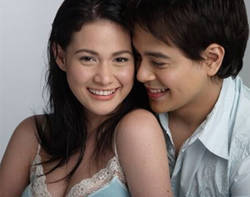 Love team appeal: From hit television shows to top-grossing films for Star Cinema, John Lloyd Cruz and Bea Alonzo have what it takes to be dubbed the Box Office Love Team of Philippine cinema. Taken separately, each of them has star quality that makes them stand out from the rest. As an onscreen tandem, their unbelievable chemistry has earned them legions of fans who wanted a real-life romance to blossom. But for now, their love story seems to be limited to the big screen.

Why we like them: Even their "sobrang cheesy" Greenwich ads were chemistry-laden pieces of 30-second entertainment.

Bea and John Lloyd: Enduring chemistry in the soon-to-open Miss You Like Crazy 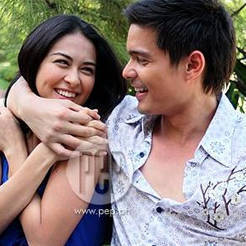 First appeared  together  in: Marimar

Love team appeal: The love story of Dingdong Dantes and Marian Rivera, or "Dongyan" to their fans, is arguably the sexiest love affair to hit Philippine television. Controversy helped: at the start of their onscreen team-up, each was involved with someone else. Midway, rumors set in. The leading man was said to be falling in love with his leading lady. Both denied it. But the ending was quite predictable. Just like any other fairy tale, or in this case telenovela, they ended up in each other's arms. Their fans praised it. Philippine television loved it.

Memorable movies/ shows together: Marimar; Dyesebel; and One True Love

Why we like them: No other love team can do primetime soaps that are practically R-18.

The controversial lovers-to-be in Marimar 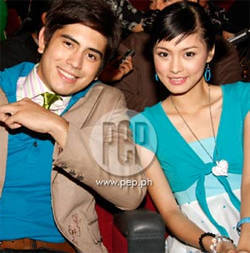 Love team appeal: Charming, wholesome, and cute. These three words best describe the "Kimerald" love team. The enchanting pair-up between the two ex-housemates–one being the adorable Cebuana chinita and the other, the alluring Amboy from General Santos–made them instant household names. They now have a number of fan clubs nationwide. All told, their on-and-off screen closeness effectively tickles the fancy of Filipino viewers. And that is the kind of charisma that will assure these two of a strong and steady showbiz career in the years to come.

Why we like them: Kim's bubbly innocence and Gerald's bad-boy image made them the dream love team of the Pinoy Big Brother house–and one of the few good reasons to endure that flat, droning voiceover.

The birth of "Kimerald" in Pinoy Big Brother: Teen Edition