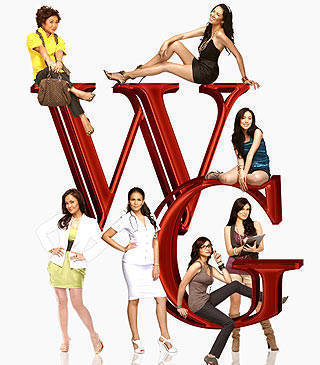 The 2010 remake of the 1984 Ishmael Bernal sexy comedy Working Girls reportedly made 8 million on their first day at the box office. Well, good for them–Unitel, Viva, and GMA that is–because they need to recoup quite a lot. There are so many actors in Working Girls that I'm fairly sure they paid a fortune in salaries alone. The movie stars Ruffa Gutierrez, Eugene Domingo, Iza Calzado, Eula Valdez, Jennylyn Mercado, Cristine Reyes, and Bianca King. Plus the "special participation" of original cast from 1984:   Carmi Martin, Rio Locsin, Maria Isabel Lopez, and Gina Pareño. (In supporting roles: Liza Lorena, Mylene Dizon, Jackie Lou Blanco, and Cherie Gil.) Phew. That's some estrogen party. Aside from Ricky Davao who plays a macho driver, the other male cast members are completely forgettable.

The good news is that the script by Jose Javier Reyes is pretty funny and spot-on, and some of the acting is good. Super awesome Eugene Domingo is in top form as an enterprising housewife who discovers her good-for-nothing-basketball-playing husband is cheating on her. The subplot involving her and Ricky Davao is enough to make an entire movie on its own. (I would watch that.) Ruffa G. is also fairly convincing as a young widow whose husband leaves her semi-poor, and she struts around in her goddess outfits and gigantic jewelry as she vows to get her fair share of the inheritance. She goes up against her dead husband's daughter played by Cherie Gil who is of course the best contrabida ever. Poor Iza Calzado–who is incredibly lovely and talented–is relegated to a corny subplot, kind of out of place in the movie, as a martyr-like nurse taking care of her ex-boyfriend's dying wife.

And despite the funny script and marketing hype, I think the movie suffers because of the sloppy technical work. The sound is terrible, as if they used a tin can to record the dialogue. My biggest boo goes to the cinematography–done by Jun Aves who also shot an amazing short film called Bulong by Joaquin Valdes–what happened?

Oh well. I guess you can't always get what you expect.

For me, the best part of Working Girls was seeing Carmi Martin, Rio Locsin, Maria Isabel Lopez, and Gina Pareño reprise their roles. Do you remember the original movie? Carmi is hilarious as sexy secretary Suzanne Galang:

What about the inimitable Gina P? Here she is, pre-Kubrador, pre-Serbis, and totally glam in a 1980s kind of way:

"I'm a Makati girl now," she says as the camera comes in for a close up. "In fact, I can speak English already. Habla español tambuen labatiba barracuda empanada…" Brilliant screenplay by Amado Lacuesta.
And as a bonus here's the original song from the 1984 version: Chona Cruz from her album "Nonstop". This track is slightly reminiscent of Donna Summer as produced by Giogio Moroder.

Jennylyn Mercado Rio Locsin Ruffa Gutierrez Bianca King Iza Calzado Cristine Reyes Eugene Domingo Gina Pareño Eula Valdez Carmi Martin Maria Isabel Lopez
Your Guide to Thriving in This Strange New World
Staying
In? What to watch, what to eat, and where to shop from home
OR
Heading
Out? What you need to know to stay safe when heading out