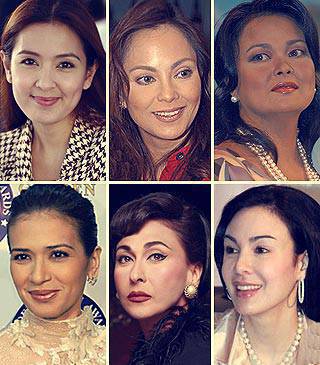 We list 10 Pinay celebrity moms who still turn a lot of heads with their timeless sex appeal.

1. EULA VALDEZ First sighting: In 1983, Valdez, 15, was one of the leading ladies in the teen flick Bagets. She played a street-smart girl who falls for a kind rich boy (Raymond Lauchengco) with a domineering mom. Mommy status: Valdez, 41, has a 15-year-old son by former partner Ronnie Quizon and a five-year-old daughter by ex-husband Richard Litonjua. She is now dating model Rocky Salumbides, 29. (That means he was only three years old when Bagets came out. Valdez has been entertaining telenovela fans since she played Amor Powers in ABS-CBN’s Pangako sa ’Yo, which aired from 2000 to 2002. She’s currently in the GMA-7 fantaserye, The Last Prince. X-factor: Valdez’s dangerous curves combined with her subtle vulnerability and seemingly guileless vibe make men want to possess her and protect her at the same time. Pop culture bonus: Valdez is the granddaughter of National Artist Fernando Amorsolo.

Dawn Zulueta talks about defying aging-"down to the last strand of her hair.

2. DAWN ZULUETA First sighting: Zulueta was 21 in her first movie, Pangarap na Ginto (1990), where she shared screen time with Dina Bonnevie. She made her mark in movies like Hinhintayin Kita sa Langit (1991) and Apoy sa Puso (1992). Mommy status: Zulueta, 41, is married to Congressman Anton Lagdameo of Davao del Norte’s second district. They have two children: Jacobo, 5, and Ayisha Madlen, who’ll turn a year old this June. X-factor: Zulueta will forever be the girl who’s always going to be treated like a queen. Men see her and feel that they’re not good enough for her. They can’t have her, so they want her even more. Pop culture bonus: Zulueta bagged two awards at the same time at the 40th Filipino Academy of Movie Arts and Sciences or FAMAS Awards-"Best Actress for Hihintayin Kita sa Langit and Best Supporting Actress for Una Ka Naging Akin

3. GRETCHEN BARRETTO First sighting: Barretto was 14 when she starred in 14 Going Steady 1984. She later graduated to more daring roles via Seiko Films productions like Tukso Layuan Mo Ako (1991) and Di Mapigil ang Init (1995). These days, she’s set to star in a primetime telenovela. Mommy status: Barretto, 40, and businessman Tonyboy Cojuangco have a 15-year-old daughter named Dominique. Despite her seemingly stable home life, Barretto has gotten embroiled in several controversies such as her allegedly risqué photo with actor John Estrada and her on-off feud with her equally-famous siblings. X-factor: Barretto’s stint as ST Queen made her the object many young men’s, er, dreams. For many of them, she’s their coming-of-age poster girl-"in more ways than one. The fact that she now looks like a too-perfect doll probably adds to her appeal. Pop culture bonus: In the 1990s, Barretto was identified as one of the most sought-after actresses for sex trip or ST films.

4. JEAN GARCIA First sighting: Garcia was 18 when she became one of the many hosts of the afternoon variety show for teens, That’s Entertainment. She then strengthened her acting chops in movies like Impaktita (1989). She later found her niche in primetime telenovelas like Pangako Sa ’Yo, where she co-starred with fellow MILF Eula Valdez. Mommy status: Garcia, 40, has a 20-year-old daughter named Jenica (by actor Jigo Garcia) and a younger son named Kotaro (by a Japanese businessman). For a time, she dated actor Polo Ravales, 27. X-factor: Garcia still seems like a wisp of a girl. She could be her daughter’s sister. She’s built like a teenager and has a comely face that drives men nuts. She comes off as worldly but innocent. Pop culture bonus: Garcia’s real name is Jessica Maitim.

The fact that Zsa Zsa Padilla can sing is a bonus.

5. ZSA ZSA PADILLA First sighting: Padilla popularized hits like "Mambobola" and "Point of No Return" in the 1980s. She later took on acting stints in comedies and steamy dramas like Magkano ang Iyong Dangal? (1989). Mommy status: Padilla, 45, and comedian Dolphy, 81, have been together since 1990. They have a daughter Zia, who will turn 20, this year. Their adopted daughter Nicole will be 21. Karylle, 29, is Padilla’s daughter by her ex-husband. X-factor: Padilla is a luscious mestiza who’s always demure and quietly charming. Men see her as a shy and classy beauty with a killer body. Pop culture bonus: Padilla has admitted to being fond of older men. Her ex was 18 years her senior.

There can be only one Cherie Gil.

6. CHERIE GIL First sighting: Her first film outing was in a 1970 movie titled Mo Neuih, where she co-starred with mom Rosemarie Gil. Mommy status: Gil, 44, has a 23-year-old son Jay by actor Leo Martinez. She also has two kids-"Bianca, 14 and Rafael, 12-"by ex-hubby Roni Rogoff, an Israeli violinist. X-factor: Gil’s reel-manufactured dominatrix rep precedes her. Men are willing be her slave. They also probably want to taker her home and give her a spanking for being such a bad girl. Pop culture bonus: Gil is set to play Greek opera diva Maria Callas in the Philippine Opera Company’s production of Terrence McNally’s "Master Class."

To Jean Saburit, age is immaterial.

7. JEAN SABURIT First sighting: Saburit was crowned Bb. Young Pilipinas in 1975. She then joined showbiz via flicks like Ang Babae sa Ulog (1981). Mommy status: Saburit is mom to actress Nicole Anderson, 20. X-factor: Like the Sphinx, you can’t figure out how old Saburit exactly is. Then, when you see that she’s in such good shape, you no longer care. She looks like the kind of woman who can teach a guy a thing or two about women. Pop culture bonus: Saburit and her daughter were once rumored to be rivals for the affections of model-actor Brad Turvey.

8. GLORIA DIAZ First sighting: At 18, Diaz bagged the 1969 Miss Universe crown. She later joined the movies. One of her most memorable outings was in Pinakamagandang Hayop sa Balat ng Lupa (1974). Mommy status: Diaz, 60, has two daughters by ex-husband Bong Daza-"Isabelle, 21, and Ava Esmeralda, 18. X-factor: Diaz’s appeal lies in the fact that she has aged gracefully. She does not look like she’s had herself filled with Botox or stretched beyond repair. She projects that hard-to-explain sexiness that draws everyone to her. Pop culture bonus: She’s the first Filipina to be crowned Miss Universe.

9. TETCHIE AGBAYANI First sighting: Agbayani won in the Mutya ng Pilipinas beauty pageant in 1979. She later appeared in countless movies like Desire (1982). She recently appeared in the Anne Curtis-Sam Milby rom-com Babe, I Love You. She now holds a degree in Psychology. Mommy status: Agbayani, 49, has a teenaged daughter named China. X-factor: You might as well call Agbayani an "earth angel." Then and now, her earthiness is off the charts. Men melt when she much as waves at them. It’s a bonus that she’s also one smart cookie. Pop culture bonus: Her appearance in Playboy’s July 1982 German edition caused quite a stir.

Rosanna Roces is known as a loose cannon-"albeit an entertaining one.

10. ROSANNA ROCES First sighting: Roces starred in forgettable Seiko Films productions from 1994 to 1996. She proved her acting mettle in Ligaya ang Itawag Mo sa Akin (Call Me Joy), which was produced by Reyna Films. Mommy status: Roces, 37, is already a grandmother thrice over Her kids started on their own families rather early. X-factor: Roces is the kind of girl that you don’t want to take home to mama. Instead, you want to run away with her and do all sorts of crazy, racy things that you’ve never done before. Pop culture bonus: When she was starting out, Roces used the screen name "Anna Maceda." Art by Warren Espejo. Image credits: Noel Orsal, courtesy of PEP (Garcia, Valdez, Agbayani, Padilla, and Barretto), Master Class publicity photo (Gil).

Gretchen Barretto Eula Valdez Rosanna Roces Dawn Zulueta Gloria Diaz Jean Garcia Jenica Garcia Tetchie Agbayani Jean Saburit
Your Guide to Thriving in This Strange New World
Staying
In? What to watch, what to eat, and where to shop from home
OR
Heading
Out? What you need to know to stay safe when heading out