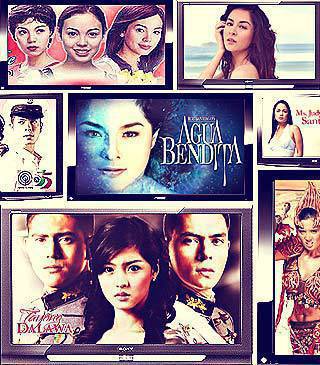 Switch babies, discover you have a twin, come back from the dead, and get a new face in the span of a few episodes of the Pinoy telenovela.

Whoever said art imitates life has never watched a soap opera or telenovela. In the Pinoy boob tube universe, the unlikely becomes commonplace and the most baffling turns of events are considered normal. SPOT.ph lists the most overused storylines that, for some reason, keep telenovela fans coming back for more. It doesn’t matter if superheroes or otherworldly beings replace the usual characters. The stories stay the same. Not that there’s anything wrong with that. Some shows, of course, have made innovations that veer away from predictable outcomes. But, perhaps, many of us derive some sort of comfort-and humor-from plots we all already know too well.

Scenario sensation: Pinoys love this plot because most of us do not like the circumstances we are in. How many of us fantasize that we’re Lucio Tan’s long lost child? Or that we’re actually a Cojuangco? Ending up with a family who’s richer than your biological parents is a secret wish that many of us don’t dare to say out loud. Baby switching was also spotted on Pangako Sa ’Yo and Tayong Dalawa (live poor baby switched with dead rich baby).

Classic setup: If the mix-up is accidental, it usually happens during a fire, an earthquake, a shipwreck, a vehicular accident, or war. If it’s not happenstance, it’s usually part of the villain’s grand plans for revenge.

The movie version of Mula Sa Puso shows how the evil Selina (Princess Punzalan) disfigures Magda (Jacklyn Jose) the real mom of the heroine Via (Claudine Barretto) with acid.

2. Acid is thrown in somebody’s face.

Scenario sensation: There’s nothing more tragic than a beautiful person losing his or her looks through an acid attack. Depending on the ratings, the said character either gets plastic surgery to get a whole new look that will help facilitate revenge (Sana Ay Ikaw na Nga) or he or she stays tragically disfigured and mysterious. If there’s a fix-up involved, there’s always some philanthropist who will foot the bill or a kindhearted doctor who will reconstruct the victim’s face to its former glory. Acid was also thrown to ruin a cruel-but-beautiful woman’s face in Impostora.

Classic setup: It’s the villain who inflicts the acid attack on a goodhearted character. The villain is never shown buying acid. The acid usually happens to be on the scene or the villain hires a henchman who already has acid. Or, better yet, the villain just happens to have a bottle of acid in her purse. What kind of acid is it? We don’t know-but it’s usually placed inside an amber-colored bottle.

Habang May Buhay’s lead character Jane (Judy Ann Santos) is reunited with her mother Rose (Gina Alajar), whom everyone thought had been dead for over a decade.

3. A character who is thought to be dead is actually alive.

Scenario sensation: The resurrection is a concept that is near and dear to a country that’s predominantly Catholic. It doesn’t really matter who gets resurrected, as long as the resurrection makes the ratings go up. It’s quite a convenient way to prolong even the flimsiest show. The resurrection theme has been used in shows like Mula sa Puso, Marimar, and Darna.

4. The star-crossed lovers are possibly siblings.

Scenario sensation: Telenovela addicts have a name for this plot. They call it "fake-cest" (a combination of the word "fake "and "incest." If the show’s sweethearts are too good to be true, writers stir things up by insinuating that the couple may be brother and sister. Horrible, right? Indeed, the thought of the hero and heroine unwittingly engaging in a relationship that’s considered an abomination drive many fans to tears. Fortunately, it is later revealed that the two are not really related. Still, toying with or insinuating the occurrence of such a taboo is down right terrible such as in Habang May Buhay (the two lead characters’ parents have an affair) and Ngayon at Kailanman (an adoptive brother has evil designs on his adoptive sister, the legitimate heiress to a family fortune).

Classic setup: A misinformed third character or an unreliable narrator causes the fake-cest fuss. Sometimes, if the show wants to be scientific, they let the villain meddle with the DNA test results or something.

5. The lead characters are twins...or even triplets.

Scenario sensation: Pinoys are fascinated with look-alikes who aren’t really alike. There’s usually an evil twin and a good twin (, an ugly twin and a beautiful twin (Bakekang), or a normal twin and a freak twin (Agua Bendita and Kambal sa Uma). It’s all about opposites who repel each other. Their strained relationship and sibling rivalry is the whole point.

Classic setup: The tension between two characters is usually revealed via flashbacks. Expect a montage of scenes heavy with symbolism about what will become of them in latter episodes. Things get complicated when the twins (or triplets) fall for the same guy or girl.

In Anna Liza, with child actress Julie Vega in the title role, the heroine gets verbal abuse from her adoptive mother (though she doesn’t know it) and her (faux) siblings.

Classic setup: The defenseless hero or heroine, who is either too young to fight back or too poor to think of fighting back, is asked to perform impossible menial tasks. He or she may also be slapped around, starved, shot at, locked inside a dog cage, or driven out of the house. Because what doesn’t kill him or her, will only make the audience hate the villains more. (Great for ratings and publicity!)

Narda/Darna (Marian Rivera) gets threatened by her own mother Alicia/Madame Amy (Rita Avila)-but they don’t know that they’re related yet.

7. The hero and the villain are actually related.

Scenario sensation: There are times when we want to kill our relatives-but we can’t. Telenovelas let us live these inappropriate dreams vicariously through this fictional complication. This storyline was used in Darna and Tayong Dalawa as well.

Classic setup: The villain and the heroine or hero are placed in a pressure-filled situation where they’re tempted or compelled to kill each other. If writers want to play it safe, they hold back and let the two figure out their blood connection before they draw blood. If producers decide to be more adventurous, they let the characters give in to their homicidal tendencies.

8. When someone is publicly humiliated or duped, they go on to become evil by actually announcing it.

Scenario sensation: Theatrics and hysterics are expected reactions whenever one his humiliated or slighted in Pinoy culture. So it comes as no surprise that such events become the turning points in telenovelas. If the hero or heroine is on the receiving end of the humiliation, he or she is usually dressed down by the villain in front of a huge crowd. Sometimes he or she is attacked physically. The same scene is played out if it’s the villain who is being humiliated (righteously so). There’s no such thing as inner rage in telenovelas. Rage must be expressed and milked for all it’s worth. This happens in Valiente, Dahil May Isang Ikaw, Mula sa Puso, Heredero, and The Last Prince.

Classic setup: The humiliated party goes on to make it clear to the whole world that he or she will demand payback for what happened. Dramatic backdrops and music are staples for such telenovela events. How else does one swear vengeance or vow to be heartless? Certainly, you’d need the right soundtrack and setting for that.

9. The hero or heroine has amnesia.

Scenario sensation: The main character gets into an accident or is left for dead someplace and wakes up with no memory whatsoever. He or she then asks: "Nasaan ako? Sino ako?" So with a clean slate, writers can then create new conflicts or, heck, even a new personality for the hero or heroine. Marimar, Rosalinda, and other telenovelas have used this technique.

Classic setup: The hero or heroine sans memory is thrown out of his or her comfort zone and thrives. This is because he or she no longer has any preconceived notions or emotional baggage. Thus, he or she forges a new life--not knowing that it’ll just get more complicated later on when he gets his old memories back.

Scenario sensation: In the world of telenovelas, love triangles are certified hits. It’s preferred over nymphomania and other fetishes or love-/lust-related complications. This has been dramatized in Dyesebel, Tayong Dalawa, Darna, Encantadia, and, well, you name it, the love trio is there.

Classic setup: It never occurs to the third party to just move on and hook up with someone else. The third party is driven mad by his or her obsession or he or she continues to pine for the object of his or her affections until the end of the series. It’s the ultimate loser position in the telenovela hierarchy.

SPOT.ph wants to know: Which do think is the most overused telenovela plot?

Judy Ann Santos Tv Shows Claudine Barretto Agua Bendita Pangako Sa 'yo Gladys Reyes Telenovela Mara Clara Encantadia First Time Saan Ka Man Naroroon
Your Guide to Thriving in This Strange New World
Staying
In? What to watch, what to eat, and where to shop from home
OR
Heading
Out? What you need to know to stay safe when heading out