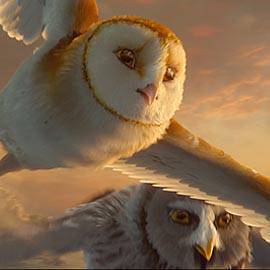 MOVIE REVIEW: Legend of the Guardians: The Owls of Ga’Hoole

SPOT.ph movie reviewer Paul Daza on why this movie--in all its 3-D glory--doesn’t soar like the 3-D movies of 2010.

Like Dreamworks’ How To Train Your Dragon and Pixar’s Toy Story 3, the computer-animated feature flick Legend of the Guardians: The Owls of Ga’Hoole is aided tremendously by superior, flawless 3D technology. Its heroic and charismatic owl heroes are so lovingly and vividly brought to life by the animators that you may find yourself unconsciously reaching out to touch the feathered creatures as they dart across the movie screen. Overall, however, Legends doesn’t quite deserve to be mentioned in the same breath as those two superb computer-animated films, considering its script flaws.

Legend of the Guardians is about Soren, a young owl enthralled by his father’s stories about the Guardians of Ga’Hoole, a mythic band of warrior owls who fought a great battle to save the world from the evil Pure Ones. While Soren (Jim Sturgess) dreams of someday joining his heroes, his older brother, Kludd (Ryan Kwanten), scoffs at  Soren’s obsession and yearns to steal his father’s favor from his younger sibling. But Kludd’s jealousy results in both owls being kidnapped by the Pure Ones one night, to be  brainwashed and trained as members of their evil army. After Soren makes a daring escape with the help of other young owls, they embark on an epic journey to find the Guardians, who are Soren’s only hope of defeating the Pure Ones and saving the owl kingdoms.

Legend of the Guardians marks the animated feature debut of Zack Snyder, the acclaimed director who gave us the highly-stylized, very adult clashes between good and evil that were 300 and Watchmen. And sure enough, he brings to Owls of Ga’Hoole his signature shots showing battles where the action zips from fast-motion to slow-motion in a blink of an eye, to the point of almost being freeze-framed for dramatic impact. This time though, the director has another toy to play with--3D. With the remarkable creativity and expertise of computer animation facility Animal Logic (best known for creating the 2006 Oscar-winner for Best Animated Feature, Happy Feet), Snyder gives us his most visually appealing,  most family-friendly movie yet. Among the many scenes in Legends that are stunningly beautiful and unforgettable, my favorite is the one where Soren, in his brave search to find Ga’Hoole, flies through a stormy ocean at night in slow-motion, the raindrops pummeling his feathered face and breaking up into microscopic droplets.  It’s a stirring, beguiling image, one which I wish I could capture in a 3D photograph and display in my room. The shot is even accompanied by a haunting song from Enya-soundalike Lisa Gerard, which gives the scene an even more dreamlike, New Age quality.

Some of Snyder’s other shots don’t even have to be seen in 3D to make their mark. Among the creepiest shots I’ve seen in this or any other animated movie is one showing the owlets after they’ve been brainwashed by the Pure Ones using the "moon-blinking" method. As terrifying fairy tales go, these scenes from Ga’Hoole are at par with the transformation of the queen into an ugly witch in Snow White, and the revelation of what really happens to bad boys who visit Pleasure Island in Pinocchio.

Credit must also be given to the cast for their superb vocalization. As the courageous  owl Soren, Jim Sturgess is wonderful, his youthful voice perfectly capturing idealism and reverence for elders without sounding naive or contrived. As Soren’s innocent and endangered baby sister Eglantine, six year-old Adrienne deFaria makes a remarkable voice acting debut. Other standouts are Oscar winners Helen Mirren as the icy owl queen Nyra and Geoffrey Rush as the battle-weary Ezylryb. For comic relief, the hilarious owl duo of Twilight and Digger provide much-needed laughs in this sometimes harrowing tale of abduction, brainwashing, and war. Voiced by Anthony LaPaglia, Twilight is an owl minstrel whose preferred method of commenting on the action is through song. His sidekick Digger (David Wenhan), on the other hand, can’t resist telling owl jokes, especially during long flights.

Somewhat problematic, though, are the serious male owls in the movie, who are voiced by Sam Neill, Hugo Weaving, and Joel Edgerton. Their voices aren’t that easy to differentiate, making it hard for the viewer to tell who’s who. It also doesn’t help that Matrix and Lord of the Rings star Hugo Weaving plays two characters in the movie using the same voice. One result of this confusion is felt near the movie’s end when one owl reveals that what everyone thought was a rescue may actually have been a trap. When said owl names the mastermind, it may take the viewer a moment or two to fully absorb the disclosure. I asked my seatmate if he understood the revelation and he replied that he was as clueless as I was. Considering the importance of this scene to the movie, Snyder and his scriptwriters could have done a better job to ensure that what they were trying to communicate was always crystal clear. They also make a similar oversight in their treatment of the device which the villainous Pure Ones are using in their war against the Guardians. Though the script is clear about what powers the weapon, it doesn’t tell us exactly what the device does, how it works, or how it can be stopped. As a result, when the good guys wrestle with the machine during the climax, we’re not that  involved because we don’t know what needs to be done to overcome it.

In the end, it’s story flaws like these which compromise Legend of the Guardians and  prevent it from achieving the levels of greatness scaled by its fellow computer-animated cousins from the class of 2010, Toy Story 3 and How To Train Your Dragon. The Owls of Ga’Hoole do fly every now and then, but the movie doesn’t quite soar as long or as often as you’d want it to.

Movie Review Legendoftheguardians:theowlsofga’hoole
Your Guide to Thriving in This Strange New World
Staying
In? What to watch, what to eat, and where to shop from home
OR
Heading
Out? What you need to know to stay safe when heading out