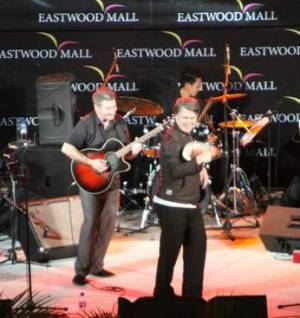 "No new songs here, no new albums to tour, just a very good, live experience for a mostly thirtysomething crowd."

Surely China Crisis isn’t Liverpool’s best musical export. Now far removed from their chart-friendly tunes of the mid-80’s, the "New Wave" act is rightfully compared to other members of the so-called Second British Invasion-Furs, Swans, and Seagulls-with cool names, and even colder careers.

However, and even more certain, is "New Wave’s" Highlander deathlessness among Filipinos, galvanized, sometimes to a criminal extent, by singles like A Flock of Seagulls’ "The More You Live, The More You Love" still in rotation.

It is this "wave" that China Crisis rides some 25 years later, landing softly, of all places, in Eastwood on a rainy Friday evening. There are no screaming teenagers or First Ladies demanding luncheons; there is a crowd of 30-somethings, at times six rows deep outside the venue, the usual mall-goers milling about, and a magical, singing fountain (none of that later).

Few do not have the "Wishful Thinking" hook merrily burrowing in their subconscious, and a previous Manila excursion, in 2002, may have provided impetus for this return engagement. Still, the Merseyside duo arrive within a few week’s span of a smorgasbord of live musical offerings: the salad-and-spring-water Taylor Swift, K-pop preeners Super Junior and, the main course no doubt, seat-fillers Stephen "It Might Be You" Bishop and Dan "Sometimes When We Touch" Hill. (Fra Lippo Lippi, supposedly arriving on Valentine’s Day, offers the most direct ear-for-ear competition.)

...and in Eastwood on Friday, January 21

Despite all this, China Crisis really couldn’t care less. They’ve probably never even heard of Kuh Ledesma. And even though most of what constitutes their best work, 1985’s "Flaunt the Imperfection," sounds more at home in the opposite side of the FM dial, to Filipino listeners, "New Wave"-thus, China Crisis-is as canonical as carols are for Christmas.

And so it was: Gary Daly and Eddie Lundon, backed up by an excellent all-Filipino session band, play with the tightness and sincerity that only decades of collaboration can produce, dishing out song after song, memory after memory. Playing clearly to have fun, and almost exclusively to a crowd that first discovered them in the 80’s; there are no new songs here, no new albums to tour, just a very good, live experience.

There too is more than a sense that the duo is time-travelling along with the crowd. Calling for a sing-along to "You Did Cut Me," Daly helps the crowd remember a few lines from Minnie Riperton’s "Lovin’ You"-unsurprisingly resulting in a flat response from a crowd that looks confused. ("Black Man Ray" and "Strength of Character," a reggae song written, according to Daly, after they had "smoked a bit of Mary Jane" follows soon after and helps the crowd settle in.)

Further reminiscing, Daly calls out to the "wavers" in the crowd to dance "that dance you do" as soon as the first bars of "Wishful Thinking" came on. By then, people finally get off their seats, with some obliging with their versions of the infamous dance, having it confused with either "Karma Chameleon" or, worse, "Pearly Shells."

While short lived, the show does wrap up on a high, with "African and White" closing out the set, and an encore of "Christian" to send the crowd home. It would have been absurd to have this in a larger, less intimate venue, never mind that they would probably not have filled the seats. China Crisis live is perfect for a rainy day, as Daly appropriately points out as something that "reminds [him] of England." Out of context-and seemingly out of reason-their 12-song set sounds better opening for Steely Dan than for Simple Minds.

In the end, most listeners get what they wanted: a re-listening of one of the more popular bands of the 80’s, never mind the marketing labels. And, if that description doesn’t cut it, this will: it was a nice "trip down memory lane." Who wouldn’t want that?

1. Seven Sports for All

8. Working with Fire and Steel

9. King in a Catholic Style

China Crisis
Your Guide to Thriving in This Strange New World
Staying
In? What to watch, what to eat, and where to shop from home
OR
Heading
Out? What you need to know to stay safe when heading out