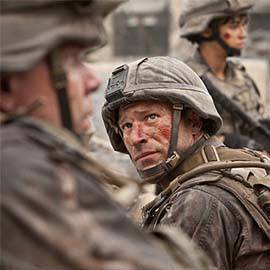 Our SPOT.ph movie reviewer says this flick would win the "Movie That Most Feels Like a Videogame" award. 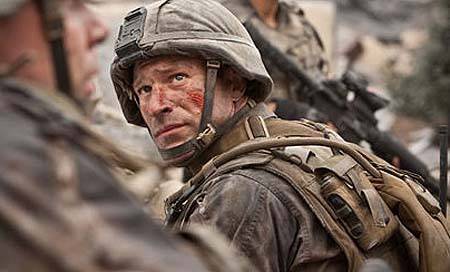 If there was an MTV Movie Award for "Movie That Most Feels Like a Videogame," World Invasion: Battle Los Angeles would win it, hands down. The new science fiction combat movie is a lot like a shoot-em-up Xbox or PS3 experience. As it unfolds, all that matters for the good guys-the marines-is to kill as many alien invaders as possible without being killed by them in turn. And though the movie is loud and lavishly produced, it's low on character development and hardly emotionally rewarding.

After a leisurely start during which the marines are introduced doing such humdrum peacetime activities as planning weddings and swimming on the beach, the movie springs to life when news of meteorites crashing in major cities all over the world are broadcast on TV. It doesn't take long before reporters realize that the meteorites are in fact aliens who have come to the earth to wipe out all humanity so they can take one of our planet's most life-sustaining natural resources. As the world's cities fall under the might of the alien onslaught, a Los Angeles-based marine platoon led by Staff Sergeant Michael Nantz (Aaron Eckhart, best known as Harvey Dent/Two-Face in The Dark Knight) vows to protect what's left of the city. With the help of Technical Sergeant Elena Santos (Michelle Rodriguez), Corporal Kevin Harris (singer Ne-Yo), 2nd Lieutenant William Martinez (Ramon Rodriguez), and others, Nantz tries to discover the aliens' weakness so they can have a fighting chance of winning the war. 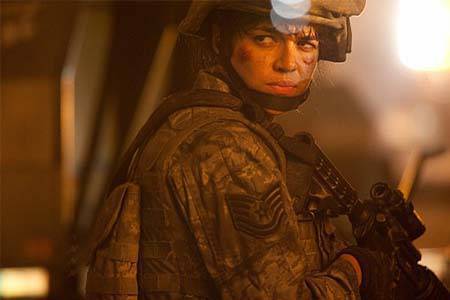 World Invasion: Battle Los Angeles doesn't at all seem bothered by the fact that it recycles scenarios, characters, and shots from some very well known recent movies, including Transformers, Skyline, and War of the Worlds, to name a few. But where those other movies had distinct and daring directorial touches, all that World Invasion can serve up is a string of clichés. There's a marine who gets assigned to what amounts to a suicide mission on the day he has retired. Ditto for a younger marine who gets the bad news as he's planning his wedding. There's also clichéd tough guy talk ("I will go to hell and back with you, sir!") that not even James Cameron would touch. And though the visual effects are top-notch, they don't really show anything we haven't already seen in movies like Monsters and Independence Day. The design of the spaceships and aliens in World Invasion is unremarkable, coming nowhere near the iconic look of the creatures in District 9 and the Alien and Predator series.

So derivative of other movies is World Invasion that when the good guys try to figure out what the aliens' weaknesses are, you may find yourself praying that the answer to that riddle isn't as cheesy as the resolution used in Independence Day (a computer virus!) or Signs (water!). To be fair to the filmmakers behind World Invasion, their solution isn't silly at all. It's not brilliant, but it at least makes sense.

Also notable are the sets depicting the battle-scarred Los Angeles, as seen through the eyes of the marines at ground level. Evoking the look of war-torn Iraq as presented in The Hurt Locker, these exteriors are a triumph of production design. Making the feat even more impressive is the fact that the L.A. scenes in Battle Los Angeles weren't shot in the City of Angels at all, but in Louisiana. The film also utilizes the no-blur, high shutter speed cinematographic technique made famous in the Oscar-winning Saving Private Ryan, giving World Invasion the appearance of a serious war movie.

Sadly though, director Jonathan Liebesman doesn't appear to have been inspired by the scripts of those Oscar-winning films. World Invasion practically wastes Aaron Eckhart by stranding him in situations that demand little from him and the other actors beyond looking tough or scared, depending on their proximity to the aliens. In fact, calling the acting in this film two-dimensional would be an overstatement. But then again, this may all have been part of Liebesman's grand plan to create a movie which even in terms of acting, had all the depth and emotional impact of a video game.

World Invasion: Battle Los Angeles Moviereview Aaroneckhart Michellerodriguez
Your Guide to Thriving in This Strange New World
Staying
In? What to watch, what to eat, and where to shop from home
OR
Heading
Out? What you need to know to stay safe when heading out