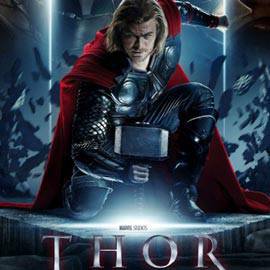 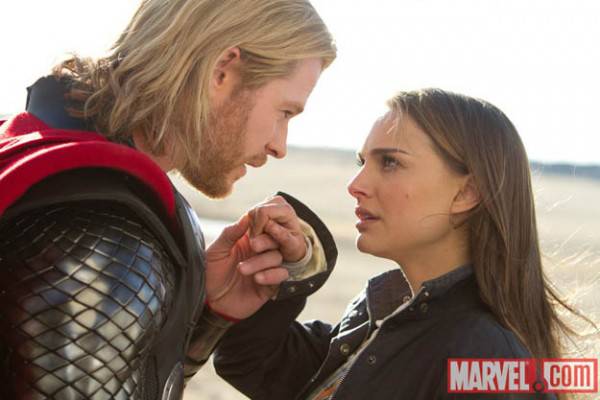 Marvel's new offering Thor is a marvel-ous and mighty movie indeed. An artful and impressive marriage of visual razzle dazzle and resonant Shakespearian drama, it's the gods, monsters and mortals movie that Clash of the Titans wanted to be.

The mighty but arrogant Thor (Chris Hemsworth) is about to be crowned king of the realm of Asgard. Ancient foes, however-the Frost Giants of Jotunheim-interrupt the event while attempting to retake a power source that was once theirs. Determined to teach them a lesson, Thor and his friends go to Jotunheim and threaten its king, bringing the two realms to the brink of war. Angered by Thor's reckless actions, his father Odin (Anthony Hopkins) strips Thor of his powers and exiles him to Earth, where he's forced to live among humans in a town in New Mexico as punishment. Thor's jealous and ambitious brother Loki (Tom Hiddleston) then seizes the opportunity and makes a bid for the throne during his sibling's absence. With the help of astrophysicist Jane Foster (Natalie Portman), Thor tries to return to Asgard, not knowing that Loki has already sent The Destroyer to hunt Thor on Earth and kill him, innocent civilians caught in the carnage be damned.

Because I was never a Thor fan, I didn't expect much from the film. But as it played out before my eyes in dazzling Imax 3-D, I was riveted from start to finish. The first part alone, which establishes how Thor ended up on Earth, was better than anything in Iron Man 2 or Spider-Man 3. Director Kenneth Branagh and his production design team maximized the title character's divine origin to create a back story as powerful and as absorbing as the prologue which began The Lord of the Rings: The Fellowship of the Ring. By taking viewers to the gleaming halls of Asgard and then plunging them in the frozen hell that is Jotunheim with its Frost Giants, Thor quickly establishes itself as a truly unique superhero movie in comparison to its more earth-bound cousins like X-Men and Batman. And as if the captivating settings weren't enough, Thor is given an added you-are-there quality thanks to the topnotch quality of the 3-D technology.

And just when I thought that nothing could top the first 30 minutes of the film-already worth the price of admission-the rest of the movie unfolded to prove that the filmmakers had more surprises and great scenes to show beyond act one. Of all the things I was expecting to be wowed by, I would never have guessed that it'd be Branagh's use of Shakespearian themes to develop the relationship between Odin, Thor and Loki that would make this Marvel movie a thundering success. Younger film fans out there may not know that before he was Gilderoy Lockhart in the second Harry Potter movie, the director of Thor was once heralded as Hollywood's next Orson Welles. This was due to Branagh's 1989 version of Shakespeare's Henry V, a film for which Branagh was nominated for Oscars for best actor and best director. Shakespearian themes in a movie about a hunky blonde whose weapon is a hammer might sound laughable, but Branagh makes the marriage work. It's what gives Thor a vitality and gravitas that's rarely present in the genre. Branagh's superb handling of the relationship between the two brothers is what makes Thor riveting to watch even when what's onscreen is a simple dialogue exchange with no expensive computer-generated effects.

When they are there, however, the meticulously-designed visual effects are wonderful to behold, and even more impactful in 3-D. The climactic cosmic battle which closes Thor has some of the best 3-D shots ever seen in a live action movie, and are at par with the best shots from Avatar.

Thor, however, has its flaws. Natalie Portman and Stellan Skarsgard (playing another scientist) feel underutilized. The movie also loses momentum in many of the scenes set in New Mexico, where much of what happens feels formulaic, from the attraction that develops between Thor and Jane, to the confrontation scene between Thor and The Destroyer. Thank goodness that Branagh and his scriptwriters were smart enough
to mine these scenes for comedy, making them effective contrasts to the dead-serious Asgard scenes. Two of the funniest lines in the film, in fact, play on the audience's familiarity with other movies and tv shows about heroic beings. One even winks at a very recent Marvel movie. When three of Thor's friends stride into town looking for
him, a government agent stationed on a roof describes them as looking like "Xena, Jackie Chan, and Robin Hood." Later, when Loki sends a giant killer robot to kill Thor, another government agent asks a colleague, "Is that one of (Tony) Stark's?" Such quips go a long way in making even the most clichéd situations shine like new.

For the most part though, Thor feels vibrantly fresh, thanks to its deft weaving of cosmic scale 3-D battles and tragic tale of sibling rivalry. Like the city of Asgard itself, the movie glows and glistens with the brilliance of its creators.

Thor Thorreview Natalieportman Chrishemswroth
Your Guide to Thriving in This Strange New World
Staying
In? What to watch, what to eat, and where to shop from home
OR
Heading
Out? What you need to know to stay safe when heading out