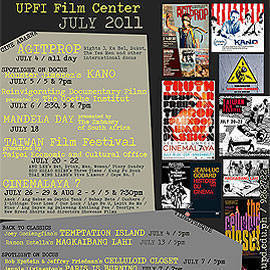 What’s Happening at the UPFI Film Center This July

(SPOT.ph) Attention, cinephiles! The UP Film Institute Film Center at the University of the Philippines Diliman will be screening an exciting lineup of classics, indies, docus, and foreign flicks this month.

The festivities kick off on July 4 with the Agit Prop International Film Festival on Peoples' Struggles where Rights 3, Ka Bel, Dukot, The Yes Men, and more international docus will be screened. On July 5 to 7, 15, and 16, Spotlight on Docus brings to the screen the much-awaited university premiere of Monster Jimenez's Kano along with other documentaries like The Road to Melancholia, Entablado, Galaw ng Araw, Waray in the City, Manila's Forgotten Past, and more. Films created by the UPFI students will also be shown. 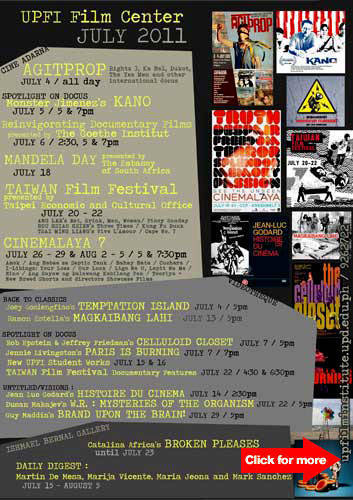 Just in time for the showing of its remake,  Joey Gosiengfiao's Temptation Island will be screened at Back to Classics on July 4 and 13 with Ramon Estella's Magkaibang Lahi. Meanwhile, Untitled/Visions on July 14, 22, and 29 features international works like Jean-Luc Goddard’s Histoire du Cinema, Dusan Makajev’s W.R.: Mysteries of the Organism, and Guy Maddins’ Brand Upon the Brain.

While you're there, check out the exhibits at the Ishmael Bernal Gallery. On display until July 23 is Broken Pleases by Catalina Africa, and opening on July 15 are Daily Digest by Martin De Mesa, Marija Vicente, Maria Jeona, and Mark Sanchez, and Videos of Pil and Galia Kollectiv. Both exhibits run until August 5.