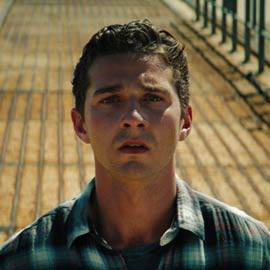 George Lucas once said, "A special effect in a movie without a good story is boring."  Lucas apparently didn't share this nugget of wisdom with director Michael Bay, whose latest blockbuster, the three-quel Transformers: Dark of the Moon contains some of the best special effects which the Lucas-owned Industrial Light and Magic has ever conjured. Alas, the movie also lacks the good story that the Star Wars creator said is vital to making a film and its special effects matter. This is partly why Dark of the Moon had me struggling to stay awake throughout its 154-minute running time. Despite its astonishing array of special effects and stupefying action scenes, Dark of the Moon ends up being more boring than special. To call it an "okay" movie would be an overstatement.

The story starts intriguingly enough, with the assertion that the race between the US and Russia to land the first men on the moon in the Sixties was the result of an Autobot, Sentinel Prime (voice by Mr. Spock himself, Leonard Nimoy) crashing there in 1961. The Russians and Americans wanted to be the first on the lunar surface to unearth or "unmoon" its secrets. When the film jumps to the present day, however, and shows us Sam Witwicky (Shia Labeouf) trying to land a job (he's graduated from college since the last film), the narrative incoherence and confounding script logic which marred 2009's Transformers: Revenge of the Fallen once again rear their ugly heads, crushing those of us who were hoping that T3 would make up for the execrable T2.

Sadly, Dark of the Moon is just as bad as Revenge of the Fallen. The only thing Bay seemingly learned from that experience was that working with Megan Fox sucks. That's why Sam now has a new main squeeze, Carly, played by Victoria's Secret model Rosie Huntington-Whiteley. The script problems, however, still persist. I still don't know why a society as technologically advanced as  the one that produced the Autobots and Decepticons can't make Bumblebee speak like the other good robots do, or why the robots on both sides only found out about Sentinel Prime fifty years after he crashed on our moon.

It's clear though that there was at least the intention to make a better Transformers movie, at least from a technical standpoint. In the post-Avatar cinemascape, Dark of the Moon is presented in superbly-engineered 3D that adds an immeasurable zing to the action setpieces. The millions of moviegoers who will pay good money solely to see cars and trucks transforming into giant robots and causing manic mayhem in a major US city won't be disappointed. Among the many searing shots are the slow-motion rescue of Sam by Bumblebee on a highway from Decepticon-induced perils, and the mesmerizing fate of a Chicago landmark.

If the computer animators and 3D engineers who worked on Dark Side of the Moon can hold their heads up high because of their flawless contribution to the movie, the same can't be said of the human actors. Shia LaBeouf's wisecracks are no longer amusing now that he's playing a twenty-something. Director Michael Bay doesn't do the once red-hot actor any favors either by putting him in a tasteless scene with Ken Jeong, the obnoxious Mr. Chow from the Hangover movies. More suitable for The Hangover than the Transformers franchise,  the crass scene involves LaBeouf being cornered in a toilet stall by Jeong, who then drops his pants and fishes out a piece of worn-out paper from between his legs. The scene concludes with Jeong thrusting the sheet at LaBeouf's face, who looks positively mortified that this scene was actually approved for filming by executive producer Steven Spielberg.

And LaBeouf isn't the only actor the movie humiliates. If Transformers 2 was subtitled Revenge of the Fallen, the latest chapter could also be called How The Mighty Have Fallen in reference to the embarrassing things its cast of Oscar winners and respected actors is made to endure for the "honor" of guesting in the movie. As the National Intelligence Director, Oscar-winner Frances McDormand is made to do something as rudimentary as bite her finger nails to convey nervousness. Oscar-nominee John Malkovich, playing Sam's eccentric employer, has a couple of agonizing seconds of screen time where he appears to be humping a part of Bumblebee. Returning as Seymour Simmons, John Turturro has scenes with a gay German that are meant to be funny, but are anything but. Leonard Nimoy is spared some embarrassment because it's only his voice that's in the movie as Autobot leader Sentinel Prime. Powerful as Nimoy's voice is, however, all I remembered when the film ended were the two lines he recited verbatim from two Star Trek movies, where he played Spock. When such a thing is done well, it's a homage. When it's staged the way Michael Bay does it in Dark of the Moon, it's a cheap shot.

With Transformers 3, Michael Bay has pioneered a new type of movie: the 3D sci-fi adventure that also comes with toilet humor and crude sex jokes, featuring some of Hollywood's most accomplished actors as annoying caricatures. Until now, my vote for the worst movie ever to be executive-produced by Steven Spielberg was 1990's Gremlins 2.  After 21 years, that unfunny creature comedy has finally been dethroned by the monstrosity that is Transformers: Dark of the Moon.

Transformers: Dark Of The Moon Transformers3moviereview
Your Guide to Thriving in This Strange New World
Staying
In? What to watch, what to eat, and where to shop from home
OR
Heading
Out? What you need to know to stay safe when heading out