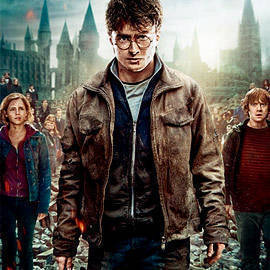 What’s there to love and not to love about the movie everyone’s watching this weekend?

Harry Potter and Voldemort face off for the final battle

Let's start with what  I loved.

1. THE 3D. This is the first and last Harry Potter movie to be shown entirely in 3D from start to finish, and the technology makes for an awesome viewing experience. As Harry, Ron and Hermione continue their quest to find and destroy Voldemort's remaining Horcruxes, they find themselves in the vast underground vault of Gringotts Bank, and later, back at Hogwarts for a massive, epic showdown with Voldemort and his army. Among the many spectacular uses of 3D are the "dragonback" ride over London, the vertiginous plunge of Harry and Voldemort from a cliff during their final showdown, and the sight of a battle-scared Hogwarts with ashen debris in the air, seemingly floating inches away from your 3D glasses. Needless to say, the movie is even more immersive in an Imax theater. For Potter fans like me who can't afford to visit the newly-opened Harry Potter theme park in Florida, watching the final chapter in Imax 3D is an unforgettable,  much more affordable way to be plunked in the middle of the boy wizard's world.

2. THE LOOK. Lighting, lensing, production design and visual effects weave their combined spells to make Deathly Hallows Part 2 an absolute stunner. The textured cinematography is vibrantly moody, the transporting sets a treasure trove of countless objects new and old. Adding to the film's sentimental delights are the reappearance of props, locations, and even scenes dating back to the first movie. Also deserving of the highest praise are the flawless visual effects, whose optical dazzlers include a pale dragon that guards Gringotts' underground vaults, and the searing battle for Hogwarts that rivals the war scenes in Peter Jackson's Lord of the Rings trilogy.

3. THE WOMEN'S MOMENTS. The Harry Potter movies have always been boys' adventures. With the exception of Hermione, most of the females in the story are usually relegated to the background, getting little more than token appearances. In Deathly Hallows Part 2, three gifted actresses get to shine in small but sublimely satisfying moments. Helena Bonham Carter is a hoot in the scene where she plays Hermione Granger using the physical form of Bellatrix Lestrange as a disguise. It gives a hilarious new spin to the expression "being uncomfortable in someone else's skin."  Maggie Smith's Professor McGonagall also has a splendid moment in the part where she helps Hogwarts prepare for war, and she's given a chance to say something both she and her character have been waiting a long time to say. Likewise, Julie Walters' Mrs. Weasley gets to exclaim an indelible soundbite to fellow femme Bellatrix Lestrange during the climactic clash.

4. RON & HERMIONE'S KISSING SCENE. I've seen hundreds of "first kisses" in movies over the decades, and I can honestly say that there's never been a first kiss quite as surprising and disarmingly giddy as the one shared by Harry's best friends.

5.  THE RETURN OF JOHN WILLIAMS' MUSIC. Though Alexandre Desplat handles scoring duties on Deathly Hallows Part 2, the movie makes touching use of entire passages of John Williams' music from the first film. The haunting music which accompanies the divisive epilogue is, note for note, the same piece Williams used to end Harry Potter and the Sorcerer's Stone. It was a stroke of genius on the filmmakers' part to seal the last film with the music that ended the first one, bringing the series to a heart-tugging musical full circle.

6. THE ACTING. Everyone gives a series-best performance in the movie, from Daniel Radcliffe as the heroic Harry to Ralph Fiennes- from the opposite end of the goodness spectrum-  as the unloved Voldemort. Some beloved characters from the earlier films also make brief but impactful surprise appearances in Deathly Hallows Part 2.

7. SNAPE'S BACK STORY. Of all the scenes in the movie I was expecting to be moved by, it certainly wasn't one where we finally learn why Professor Snape saved Harry's life during the Quidditch match in The Sorcerer's Stone. And yet, the sequence which explains why Snape so despised Harry turns out to be the richest, most moving part of the film.

And now for the three things I didn't like:

1.    THE MOVIE ASSUMES THAT YOU'VE READ THE BOOK AND REMEMBER ITS MINUTEST DETAILS. I  read Harry Potter and the Deathly Hallows at the end of July 2007, and I haven't re-opened the book since. Despite having read the tome, the movie perplexed me in parts where I had since forgotten certain details from the book. I have no idea, for example, how Harry made the Sorcerer's Stone and the Golden Snitch work for him in one crucial scene. These and other plot points had me asking, "How did that happen?" on more than one occasion.

2.    THE HORCRUXES WERE TOO EASY TO FIND AND DESTROY. Harry and other characters emphatically state how difficult it is to locate and destroy Voldemort's last three Horcruxes, and yet Harry, Ron and Hermione- not to mention Neville Longbottom- encounter little difficulty doing so. The Horcrux associated with Rowena Ravenclaw, for example, is supposedly impossible to find, but it's obtained just a few scenes after Harry starts searching for it. The book was far better at conveying the perils accompanying the Horcrux quest than the movie, which relies on luck, contrivance and deus ex machina too closely for comfort.

3.    The 'BLAH' DEATH SCENES. David Yates' stint as Potter director began with The Order of the Phoenix ( the fifth in the series) and he has staged the death scenes of four beloved characters before Deathly Hallows Part 2: Sirius Black, Albus Dumbledore, Hedwig, and Dobby. Call me an unfeeling Grinch, but I wasn't moved by ANY of those deaths, as directed by Yates. They were memorable only because they were so blandly and sloppily executed (pun intended). The last time I shed tears due to a death in a Potter movie was in The Goblet of Fire- directed by Mike Newell- and it was the scene where Cedric Diggory's father reacted to the sight of his son's lifeless body. In Deathly Hallows Part 2, Yates kills off at least three more good guys, and again, their demises left me cold and unmoved.

Like all Potter fans, I hoped and prayed that Harry Potter and the Deathly Hallows Part 2 would be a perfect capper to a series of books and movies that have provided me with hundreds of hours of entertainment pleasure for more than a decade. I wanted the last movie to be as monumentally satisfying as J.K. Rowling's Deathly Hallows book. Alas, it wasn't meant to be. For this Potter fan at least, the final film is undeniably magical and  magnificent, but not quite as perfect as I wished it would be.

Check out the movie schedule for Harry Potter and The Deathly Hallows Part 2 here.

Harry Potter And The Deathly Hallows 2 Harrypotterandthedeathlyhallows2review
Your Guide to Thriving in This Strange New World
Staying
In? What to watch, what to eat, and where to shop from home
OR
Heading
Out? What you need to know to stay safe when heading out