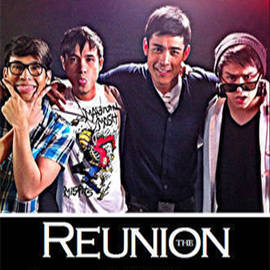 The Reunion: To Go or Not To Go?

Our Spot.ph Blogger tells us why we should (or shouldn’t) catch The Reunion.

(SPOT.ph) Here's a movie about a bunch of friends who are going to their high school reunion set to a soundtrack of hugely popular Eraserheads songs. Star Cinema's latest youth-oriented comedy (directed by Frasco Mortiz) sounds like a good idea, sure, especially when you have a bunch of young hot actors to play the four lovable losers determined to make right the wrongs they did back in high school.

Nerdy Lloyd (Enchong Dee) is a graphic designer working in a print shop, pining for the love of his life Ara (Cristine Reyes, post-nose job, and inching slowly towards the drag queen look of the cosmetically enhanced). His friend Ali (Jessy Mendiola) is the classic just-one-of-the-boys-girl-next-door, a martyr secretly in love with Lloyd. Meanwhile Lloyd has no idea that his best friend is in love with him because he's too busy running around with his friends: Boggs (Enrique Gil), the incorrigible playboy; Joax (Xian Lim), the ultimate yabang hotel valet; and Pat, (Kean Cipriano) the talent show veteran. There's even a token gay character, Jay (Matt Evans) who has all the kakaloka lines-which are not necessarily the best ones-and gets to parade around in cute outfits like shorts and tight pink blazers. (Ugh.) Anyway, Lloyd, Boggs, Joax, and Pat were lucky enough to have girlfriends in high school-only they get collectively dumped when they land themselves into a heap of trouble because of the smoking hot Julie (Aloida Gosiengfiao, in a verrrry short skirt, surprise, surprise).

Seven years after graduation, Lloyd, Bogs, Joax, and Pat go to the reunion,  which looks more like prom night with fabric swags, Tivoli lights, fire dancers (I kid you not), the obligatory buffet, and a fist fight. The poor principal (Bodjie Pascua, and don't you dare call him kuya) is accidentally set on fire and our heroes are thrown out of the party. After this debacle, it dawns upon Lloyd-who is apparently the smartest of the bunch, if not the most sensitive-that all their misfortune can be pinned on a single event: the Julie scandal. So they take it upon themselves to find the nice girls who dumped them and basically repair the damage. Lloyd tries to locate Ara, who is now engaged to be married and unable to attend the reunion. Joax somehow finds his ex girlfriend Toyang (Megan Young), who is a nurse and a single mom. Boggs learns that the formerly athletic Ligaya (Julia Montes) lost her leg in a mountain climbing accident, while Pat discovers that his timid ex Shirley (Bangs Garcia) is now an FHM model. (And where is the smoking hot Julie in this big mess? Presumably getting decked out in cosplay outfits with very short skirts.)

It could have even been a good movie, or at least, a feel-good movie. Unfortunately, it suffers from an un-funny screenplay that relies too heavily upon flashback and madcap romping, pretty awful acting, and generally sloppy production values like uneven cinematography and abysmal sound; the dialogue is drowned out by the musical score. I mean, really, if I'm going to pay nearly two hundred bucks for a movie, I would at least like to hear the dialogue (no matter how bad) and see the images clearly on screen.

So is there a saving grace to The Reunion? The supporting characters-from the random extras with talking lines, the great Gina Pareño who plays the sari-sari store lola Aling Nena to Ronnie Lazaro as Mang Ben, the crazy dad-are wonderfully zany. There's a scene where an old classmate comes up to Boggs at the reunion and she starts Vogue-ing as she talks to him. Ning-ning is straight out of Romy and Michelle's High School Reunion. She may have watched this tutorial video before going to the reunion, which is always a good idea.

And there's a cute music video (directed by Marla Ancheta) at the end credits of the movie. If you're going to sit through the whole thing, wait for this: Vin Dancel singing Overdrive. It's an awesome cover of an awesome song. Finally, we get a sense of how music can set you free.

See the movie schedule for The Reunion here.

Movie Review Thereunion Xianlim Kenciprianio Enchongdee Christinereyes Enriquegil Juliamontes Rialimjap
Your Guide to Thriving in This Strange New World
Staying
In? What to watch, what to eat, and where to shop from home
OR
Heading
Out? What you need to know to stay safe when heading out