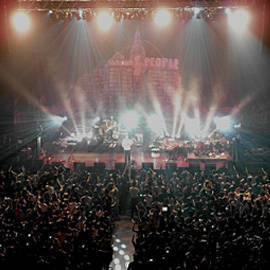 BEST IN SHOW: Foster the People

Relive the most pumped-up moments from the band who brought you "Pumped Up Kicks."

(SPOT.ph) If their October 6 concert at the Araneta Coliseum was any indication, Foster the People, best known for their catchy indie hit "Pumped Up Kicks," is best enjoyed with overpriced glow sticks. Combine the color of thousands of mellow neon lights with the impressive stage design, an enthusiastic performance from the band, and pitch-perfect Pinoys singing along to the choruses, and it all added up to a night to remember. Our favorite moments: 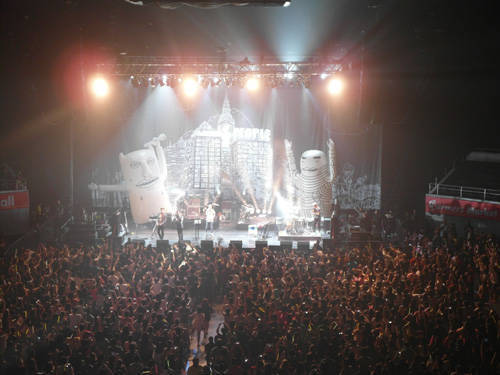 1. The stage was every hipster's dream. Just take a look at how quirky that background is! The band’s name was slotted neatly into the cityscape-and-clouds backdrop. Much later in the show, two balloon characters appeared to delight the crowds.

2. The band opened strong with a fan-favorite tune. "Miss You" had audiences leaping off their seats. Lead singer Mark Foster seemed genuinely excited to for the sho-he actually knocked his electric piano over at the end of the song.

3. Marc Foster revealed his Pinoy connections to his fans. "My grandfather lived in the Philippines," he said at the end of the song. "My dad lived here in the 70s and now I'm here in 2012. It's too cool." We have to agree. 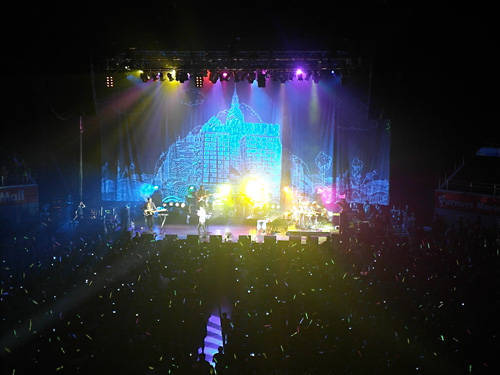 4. The entire show felt like a stage musical. Lights briefly went to black at the end of each song, only to burst back to life when another song began. Just like a musical number, right? Props to the theatrics, too; "Pumped Up Kicks," for example, got the audience feeling serene with ocean blue lights, before prepping the crowd at the verses with bright white lights that finally exploded into pastels for the chorus.

5. The audience sang along to "I'd Do Anything for You." With a chorus like "Ooh la la, I’ve fallen in love, and it’s better this time than ever before," it’s arguably the band's most romantic song on their album. What else could Mark Foster do but smile? "It's not going to take us that long to come out here for the next record, that's for sure."

6. In between songs, Mark shared his thoughts on the Philippines. "This is where Ali fought Frazier. You guys got history, you guys got passion, you guys got Pacquiao...best boxer since Ali." 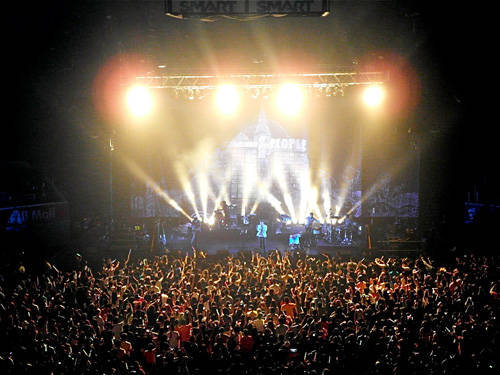 7. The fans displayed pitch-perfect skills when the band played "Call It What You Want." The lights went down, and during the "oohs" parts, the band encouraged the audience to sing for themselves. "You guys know Maroon 5 was here a few weeks ago right?" Marc asked. "When they were here, James Valentine [the lead guitarist for Maroon 5] texted me because he saw our poster in the arena. He said Filipinos are always pitch perfect. He was totally right." This only got the audience singing louder.

8. If we were to compare the concert to a musical, act two definitely began when the band sang "Don't Stop." Mark Foster, who had played piano and percussion in the earlier parts of the show, came out with a guitar and danced across the stage while playing. Kudos to the unnamed band member who alternated between percussion instruments at the front of the stage and piano at the rear of the stage in the middle of songs! Another awesome moment was when Mark and drummer Mark Pontius were actually playing on the same drum set at the same time without losing a beat.

9. The show seemed to end when the band played "Helena Beat." At the end of the song, Mark placed his guitar on the floor and the band abruptly walked off the stage. The audience, of course, knew better. There was at least one song we all knew they hadn't played yet. With their glow sticks in the air, the audience rose to their feet and yelled "Pumped Up Kicks!" until the band came back out. 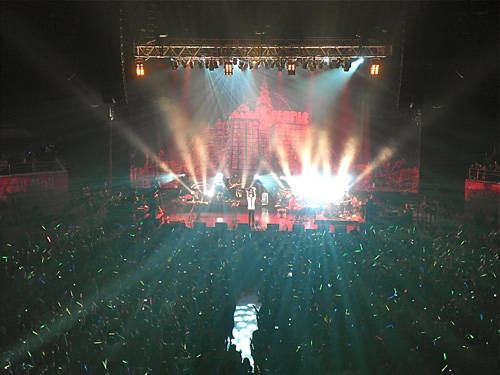 10. The encore of the show had audiences on their toes and singing at the top of their lungs. But then again, who in that crowd wouldn’t know "Pumped Up Kicks?" They started the song slow, with Mark Foster playing the piano chords until the audience broke into song before he did. Then the song exploded into a perfect mix of whistling, drum beats, and guitar chords that ended the show perfectly.

Bonus moment: At the end of the show, when drummer Mark Pontius threw several drum sticks at the audience, the audience couldn't help but throw their glow sticks back.

Foster The People Concert Araneta
Your Guide to Thriving in This Strange New World
Staying
In? What to watch, what to eat, and where to shop from home
OR
Heading
Out? What you need to know to stay safe when heading out