The issue has to be settled, which team are you on? 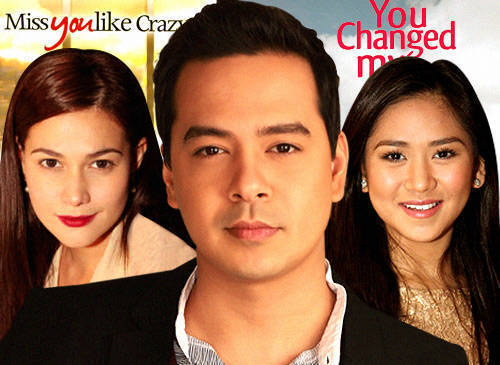 (SPOT.ph) For a guy with no abs and sparse facial hair living in a lookist world, John Lloyd Cruz has somehow managed to become one of the country’s most bankable leading men, thanks to the sheer power of character projection. Who wouldn’t be swept away by the resilience of Mackie Galvez or Miggy or Popoy or Palits? The first (and currently, only) movie he made with Angel Locsin grossed over P157 million, proof of the power of his puffy cheeks. But despite the success of that film and the endorsements he has with Locsin, a quick run of his name in Google auto-fill reveals a very interesting fact.

That’s right. More people Google John Lloyd with either Bea Alonzo or Sarah Geronimo than with women he actually dated. Of all the women he dated in real life, only Shaina shows up. It dawned on us that the "team" in "love team" means a little more for the tandems involved. It’s a 10-year-old pairing versus a half-a-billion-peso tandem: Bea Alonzo versus Sarah Geronimo. Who’s the better woman for John Lloyd Cruz?

The history: Back when Bea was just a preteen, John Lloyd was already showing his promise as a bankable actor. He starred in several coming-of-age comedies as well as the long-running Sunday show, Tabing Ilog. In 2002, the two made small-screen magic when they played Andrei / Yuri and Katrina in Kay Tagal Kang Hinintay. Lloydie’s bankability was confirmed in this teleserye and the relatively unknown Bea also proved her worth, enough to earn them their first movie within a year. My First Romance earned a modest P94 million, but it was the first of seven. Not too shabby, especially when you throw in the six other telenovelas they made.

In a move to shake things up, the lords of ABS-CBN took the infallible love team apart by casting John Lloyd with popstar Sarah Geronimo after the pair starred together in a Maalala Mo Kaya episode. Both Lloydie and Sarah were fast-rising celebrities at this point, with Lloydie still enjoying the success of One More Chance and Sarah on her way to releasing her fifth studio album.  The gamble paid off and the success of the film didn’t rely on the fanbase of a love team, but on a quirky storyline and catchy script. A Very Special Love went on to collect P180 million in the box office, and their famous "Sun Dance" scene became an anthem for their growing fanbase. John Lloyd and Sarah’s Miggy and Laida portrayal became so big that it spawned two other films, the third of which will premiere this month.

Endorsements: Bea was not an official endorser of a pizza chain but she did make a little cameo on a boat while Lloydie threw cheesy pick-up lines at her. At the peak of their fame, they both endorsed an anti-dandruff shampoo brand with Piolo Pascual (who was also later paired with Bea). The tone was a bit sexist and wasn’t capitalizing on the chemistry between the two, which might be why Lloydie has now  defected to a rival shampoo brand with another one of his leading ladies, Angel Locsin.

On the other hand, Lloydie and Sarah were all sweet in a pancit canton TV commercial for a brand that they are both still endorsing.

For their part, John Lloyd and Sarah’s efforts add up to P405 million with P180-M for A Very Special Love and P225-M for You Changed My Life.

On average, one Bea and John Lloyd film totals P129.06-M in the box office, while each Sarah and John Lloyd project is almost double that with P202.5-M.

Real-life romantic probability: Bea and John Lloyd have never confessed to any off-screen, real-life chemistry. Bea’s first major boyfriend was actor Mico Palanca in 2006 after a three-year courtship. They broke up after two years. She dated Jake Cuenca in 2008 and Gerald Anderson in 2010. In an ABS-CBN article in 2010, both confirmed that they were better off not being a real-life couple since a romance off-screen could potentially endanger their working relationship. He did, however, confirm that he loved her. "Kalahati ng buhay ko dito (show biz) kasali si Bea so napakalaking bahagi ng buhay ko si Bea, kung paano naging malaking bahagi ng buhay ko ang show business," he said. Bea replied with a simple: "Kung may kasama ka nang walong taon, bakit hindi mo naman mamahalin ’yung taong ’yon." Bea has been dating actor Zanjoe Marudo since 2011. In the course of their tandem, John Lloyd dated Ciara Sotto (2001 to 2003), Liz Uy (2006 to 2009), Ruffa Gutierrez (2009), and Shaina Magdayao (2010 to 2011). The latter is Bea’s best friend. John Lloyd is currently dating Angelica Panganiban.

Due to her mother’s ultra-strict standards, Sarah, meanwhile, has yet to confirm being in an official relationship. However, she was linked with Rayver Cruz and Gerald Anderson.

Fanbase: The fans of the Lloydie and Bea love team have a YouTube channel, several Twitter accounts with respective Facebook fan pages (specifically those maintained by LaBers and simplybeajlc), and two fansites (last updated in 2008 and 2009) set up for them. The LaBers account in Twitter has about 24,000 followers.

Winner: Lloydie and Bea. Their most recent film ended in a wedding-even though their characters didn’t end up together. It is now the third highest-grossing film of all time. When a love team can dare to be that unconventional, it gets pretty hard to beat.