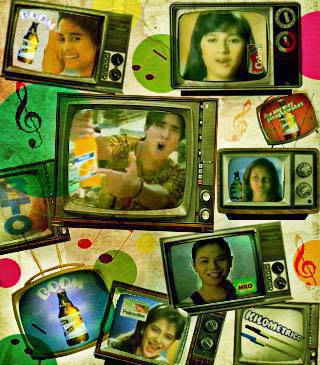 10 Most Memorable Ads and their Jingles (Part 2)

We list down more TV ad jingles we can’t seem to erase from our memory and our LSS list.

(SPOT.ph) The TV commercial gods must have blessed the creative souls who managed to make us remember these ads over time. SPOT.ph dug up anew more of the most memorable TV commercial jingles we grew up with, heard of or still catch ourselves singing from time to time:

Who can forget the nimble and cute young gymnast Bea Lucero in the Milo commercial who had all the little girls trooping to Club Gymnastica for lessons? Milo glamorized the cartwheel, the backflip, and intense training; and inspired young girls to be just like Bea Lucero. The ad also spawned a series of other Milo commercials which featured winning athletes. Watch the 1995 ad with an older Bea Lucero, who now trains aspiring gymnasts:

Long before Rachel Lobangco did death-defying, flame-dancing zipping or even brought the frog Kokak to life , she was the poster girl for the San Miguel Beer ad in 1988, with the Apo Hiking Society singing the catchy jingle and followed her around in the commercial. One of the more memorable ads of the beer brand launched the career of then 16-year old Rachel Lobangco who had big dreams of becoming a model. She has tried to maintain the sexy image she was first known for and in a 2007 FHM interview, she said that two decades later. "It’s [still] so hard to be the Shboom girl. The expectations are so high and I have so many friends who are following my career."

"I am the future of the world
I am the hope of my nation
I am tomorrow’s people
I am the new inspiration..."

Young singer and actress Lilet became famous for one of Coca-Cola’s TV ads, a localized version of the commercial featuring a diverse group of kids harping on universal harmony, reminiscent of the ads by United Colors of Benetton.

A few years after, the Tagalog version came out with the singer who was also dubbed the "Muse of OPM," and the kids of Coca-Cola employees were reported to have been part of the commercial:

The commercial was also a worldwide ad used in other countries like the United Kingdom, Peru and Korea.

The TV ad of the pink-colored detergent became an ’80s fixture on TV sets, with a policeman suddenly singing and dancing on the street. It was meant to rival the mild detergent Perla, but disappeared on the grocery shelves a few years after.

The TV commercial with the bendable blue Kilometrico pen was mostly shown in movie theaters and local TV channels in the ’80s. Kilometrico also sponsored quiz shows like the Quiz Date with Helen Vela and Tito Sotto.

Rizal Underground’s catchy song, Paolo Abrera’s cool demeanor and newcomer Ina Raymundo in the 1995 ad made Saturday night partying with the beer brand a lifestyle staple. The TV commercial was the "Sabado Nights girl" Ina Raymundo’s claim to fame, and made her an instant star.

The commercial which came out in the early ’90s featured the late Master Rapper Francis Magalona with his signature rapping skills voicing hope and nationalism for the local softdrink, Royal Tru Orange.

A few years later, a song and video was produced with the same song he used for the Royal Tru-Orange jingle:

The brandy ad first debuted on radio, made the TV rounds in the late ’70s and early ’80s and remains to be one of the most catchy and unforgettable jingles to those who came of age in those times.

Fresh-faced Sheila Ysrael and Alice Dixson starred in this 1987 Palmolive commercial which immortalized the shoulder choreography and the line, "I can feel it!" The classic ad also launched Dixson to stardom, who moved on to play Faye, a fairy princess who fell in love with an earthling (Vic Sotto) in the long-running TV show, "Okay Ka Fairy Ko" before she was replaced by Tweetie de Leon.

The first White Castle Whisky commercial came out in 1978, but it was the 1986 version (where the jingle had new English lyrics) with Lyka Ugarte in the signature fire-engine red bikini, riding on a white horse by the beach, that made it to the list of most unforgettable Pinoy TV commercials.

SPOT.ph wants to know: What other TV jingles can’t you get out of your mind?