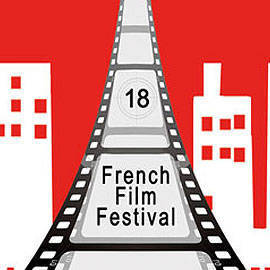 The SPOT.ph Guide to the 18th French Film Festival 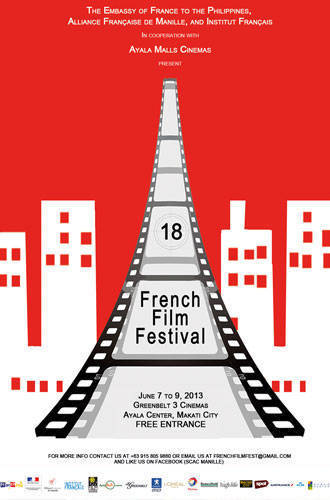 (SPOT.ph) Refine your taste for European cinema as the 18th French Film Festival comes to Manila. From June 7 to 9, Greenbelt 3 cinemas are offering a free screening of a variety of French films to suit your taste.

A shy yet sassy nine-year-old girl named Rachel, figuratively suffocated by her overbearing parents, finally meets a fearless young girl, Valérie, who shows her the beauty of freedom (from grownups).

Why You Should Watch It: Have fun watching this sweet and entertaining dramedy set in the 1980s about the explicit world of affairs, cusses, and insane families from the eyes of two unsuspecting young girls.

What's It About: After being left behind by her lifelong love on New Year's Eve, Camille, a 40-year-old struggling actress, gets a second chance when she wakes up in a hospital bed, seemingly back to her 16-year-old self. Will her brilliant plan of rewriting her love story work?

Why You Should Watch It: The plot may be something we're all familiar with, thanks to Hollywood, but this French take on alternative futures, employs a whimsical treatment that shows a story about What if?

What's It About: The beautiful Marion Cotilliard stars in this moving story of rebuilding a life lost. With the help of the unlikely Ali (Matthias Schoenarts), Stephanie (Marion Cotilliard) finds the strength to live.

Why You Should Watch It: We are used to seeing Marion Cotilliard in movies that show her radiance and beauty as a French actress but this is her most tragic role yet. Plus, the writer-director Jacques Audiard hits all the right notes in tastefully showcasing a gripping romance between two random characters. Tears may fall, so bring some Kleenex just in case.

What's In a Name?

What's It About: What starts out as an innocent dinner with friends turns into a raucous night of hypocrisy and unpleasantness; all because of the scandalous name that Vincent decides to give his newborn baby.

Why You Should Watch It: The sharp wit and humor and the seamless chemistry of the cast is a fitting movie perfectly enjoyed with the barkada. Also, it helps to watch if you are dying to know the answer to the movie's title.

What's It About: To stage a production of Molière's The Misanthrope, actor Gauthier tries to convince fellow actor, albeit retired Serge Tanneur to play a pivotal role in the play-that of the title role itself.

Why You Should Watch It: In the dog-eat-dog world of acting, Cycling with Molière gives an in-depth look at an actor’s endless quest of regaining his place in the spotlight. It helps to be familiar with Molière's The Misanthrope when you watch!

Greenbelt3 Greenbelt Frenchfilmfestival Frenchcinema Filmfestival
Your Guide to Thriving in This Strange New World
Staying
In? What to watch, what to eat, and where to shop from home
OR
Heading
Out? What you need to know to stay safe when heading out