LGBT Love: Relationship Advice for Vincent and Eric of My Husband's Lover
Loading
Already a member? Log in
No account yet? Create Account
Spot.ph is your one-stop urban lifestyle guide to the best of Manila. 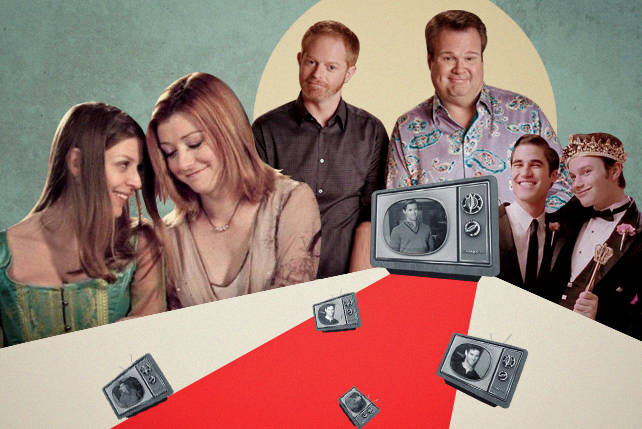 LGBT Love: Relationship Advice for Vincent and Eric of My Husband’s Lover

We’re not going to say we promote "diversity" because what we really root for, above all else, is love. 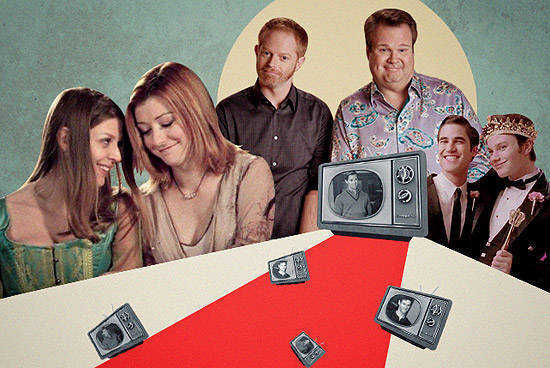 (SPOT.ph) Are we gay? Damn right we are! We are gay, happy, blissful, and ecstatic as we welcome Vincent and Eric from My Husband’s Lover into the roster of prominent LGBT TV couples! Yes, we know the CBCP has spoken about it but if we’re going to burn in hell, we might as well burn for love!

We acknowledge the fact that not everyone accepts everyone else’s life choices (honey, did you seriously need to wear those shoes with that skirt?) but we are not here to insult or offend. We are here because finally-finally-life is bleeding into art. Members of the LGBT community are finally-finally-being portrayed as more than just sidekicks or the butt of jokes. Now there are shows that depict non-straight people in banal and lifelike situations.

The fun part is that Vincent and Eric aren’t doing it alone. Here are 10 gay couples from TV land who can offer some advice for the pair.

Disclaimer: We’ve excluded the pairs from shows such as The L Word and Queer as Folk as they are basically hall of famers. 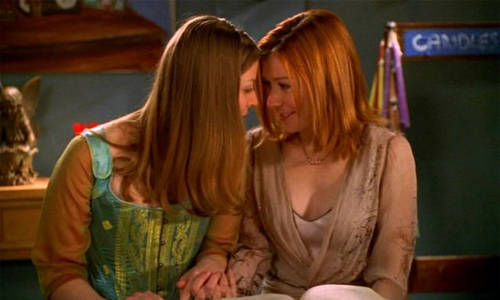 Let’s explore and never come back

10. Willow Rosenberg and Tara Maclay from Buffy the Vampire Slayer

Reasons why we love them: They were one of the earliest positive lesbian relationships portrayed on television and the response to them was so strong that the creator of the series, Joss Whedon, incurred the wrath of his audience when Tara was killed. It was great to see an LGBT couple without having to ask, "Who’s the boy? Who’s the girl?" Despite being strong women, neither Tara nor Willow were pressured to look or act "like men."

What Vincent and Eric can learn from them: Um...lesbians have problems, too?

Nasir:  The Gods return you to my arms

Agron: I was a fool to ever leave them

9. Agron and Nasri from Spartacus: Vengeance (and Spartacus: War of the Damned)

Reasons why we love them: The moments leading up to their first kiss, when Agron finally realizes that he should confess to Nasir because dying is always an option for them, almost make you want to be in war-for the incredibly petty reason of having an excuse to admit your feelings. But then again, love is a battlefield!

What Vincent and Eric can learn from them: If anyone ever mocks either Vincent or Eric with flamboyant theatrics, they can always reference this pairing to dispel the stereotype that gay men are "soft." 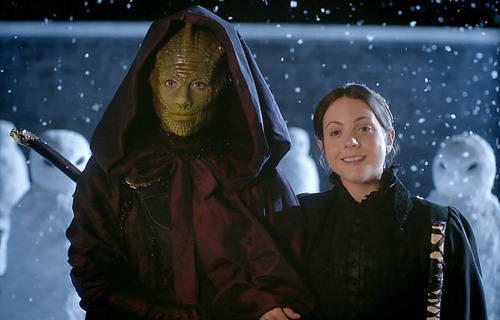 8. Madam Vastra and Jenny Flint from Doctor Who

Reasons why we love them: She’s a lizard from the dawn of time and she’s... Jenny. They don’t seem to care what people think. They just walk around like it’s perfectly normal to be in love with each other, and it is.

What Vincent and Eric can learn from them: Having trouble coming out because homosexuality is frowned upon? Madam Vastra is a reptile and Jenny is a mammal. Imagine the problems they have. It’s best not to pay attention to most people, although as a sincere tip in life, there’s a fine line between nonchalant and abrasive. 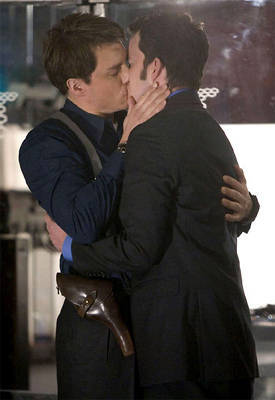 He kisses women, too...but whatever.

Reasons why we love them: Bisexual people exist! And as a bonus point: bisexual men exist! The exploration of the relationship between Jack Harkness and Ianto Jones throughout the series until Ianto’s death was nothing short of exquisite in its presentation of the complexity of human sexuality.

What Vincent and Eric can learn from them: Hello, Vincent. Let us introduce you to the concept of bisexuality because yes, sometimes both sexes are attractive. But try not to have both at the same time unless all parties consent. We’re all for being gay and all, but infidelity? We "tsk, tsk" on that.

6. Bryan Collins and David Sawyer from The New Normal

Reasons why we love them: Is there any reason not to? They’re fabulous, they’re smart, and they promote happiness!

What Vincent and Eric can learn from them: As a life lesson, even if you’re really good and funny, sometimes not enough people will appreciate you enough for you to to make it to the next season, but that’s okay. It’s the quality of the love that matters and how fondly people remember you.

Reasons why we love them: There’s just fun in bickering, you have to admit that. Bickering is proof that you’ve reached that point in your relationship where the gloves are off and you can hate the other person because love allows you that freedom.

What Vincent and Eric can learn from them: Grow up! You really shouldn’t live your life fixated on a problem that should have been resolved in high school. Facing tough stuff because you’re gay is part of the package but you should at least admit it to yourself. No excuses. 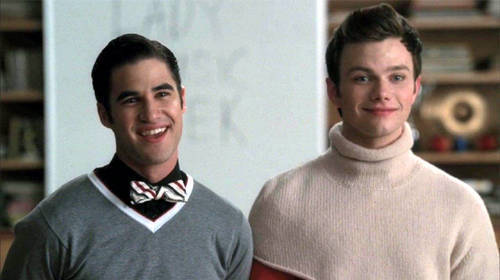 Reasons why we love them: As fictional characters, they’re providing the younger LGBT crowd with examples to draw courage from.

What Vincent and Eric can learn from them: Hey look, these kids are facing the same problems and are braving the storm. Maybe you should do the same. Come on, come out. 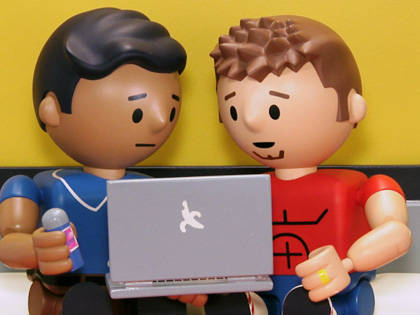 3. Rick Brocka, Jr. and Steve Ball from Rick & Steve: The Happiest Gay Couple in All the World

Reasons why we love them: Aside from the fact that they are characters created by Q. Allan Brocka, nephew of the great Lino Brocka, they’re funny in an adult way. They have problems like any other couple in the world but they thrive in the face of adversity.

What Vincent and Eric can learn from them: Guys, coming out is the least of your worries. Best to get that part over and done with because there is a lot more to deal with when you start having your "proper" relationship.

NSFW: Renly and Loras making out because that’s what people attracted to each other do

2. Renly Baratheon and Loras Tyrell from Game of Thrones

Reasons why we love them: One declared himself king and the other is a knight. Gay men in powerful roles are always awesome.  Although Loras Tyrell is a very pretty man and his nickname is Knight of the Flowers, he’s an extraordinary jouster and is very skilled with his sword (we are accounting for the one made with steel).

What Vincent and Eric can learn from them: Renly and Loras’ story will feel all too familiar to Vincent and Eric. Renly Baratheon marries Loras’ sister, Margaery, to seal an alliance with the Tyrell clan and he walks around like his heart isn’t throbbing for Loras. The sad part is Renly dies (as we all will), leaving Loras grieving and raging for his beloved. Don’t let that happen to you, Vincent and Eric! Love while you can! 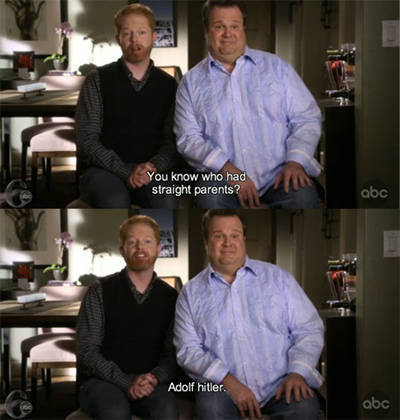 Reasons why we love them: Cameron and Mitchell, who are openly gay, have been partners for eight years. They have adopted a daughter together, Lily, and they don’t let being gay define them. Cameron is extremely theatrical but also loves sports and takes pride in being from a farm. Mitchell Pritchett is a lawyer because, yes, gay men can do well in careers outside entertainment.

What Vincent and Eric can learn from them: Drama’s a part of life but when you have someone who really loves you, you can afford to lighten up a little. Don’t take true love for granted, appreciate the lover who has your back no matter what.

Images are promotional pictures and screencaps from various sources.