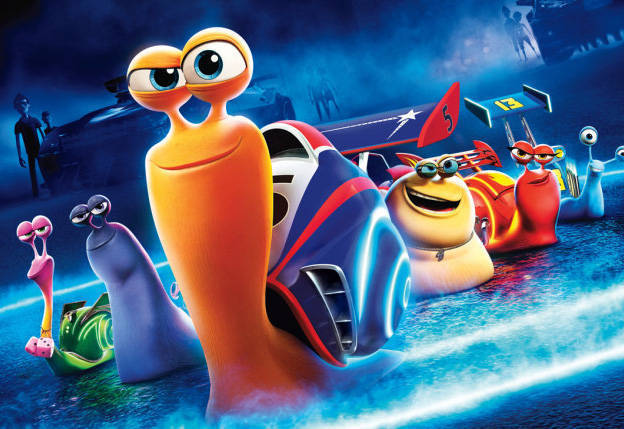 For a film about snails, <em>Turbo</em> delivers high-velocity racing action!

(SPOT.ph) This Dreamworks Animation feature is about a garden snail named Theo (voice by Ryan Reynolds) who dreams of competing in the Indy 500. An accident involving nitrous oxide transforms him into a slug that can reach speeds of more than 200 miles per hour, bringing him a quantum leap closer to his dream. But will his super-speed last forever?

The cool kuhols. One of the biggest surprises about Turbo is that it actually makes snails cool. Theo/Turbo is awesome not because he's voiced by Ryan Reynolds, but because he lights up like a high-tech vehicle from Tron when he's moving at breakneck speed. Whiplash is cool-as-ice because he's voiced by Samuel Jackson, who delivers a rare, G-rated performance that's devoid of expletives and curse words as a racing snail with swagger in spades. Among all the snails Turbo meets on his journey from L.A. to Indianapolis, however, my favorite is the hilarious but incongruously named White Shadow, voiced by a Dreamworks storyboard artist named Mike Bell. 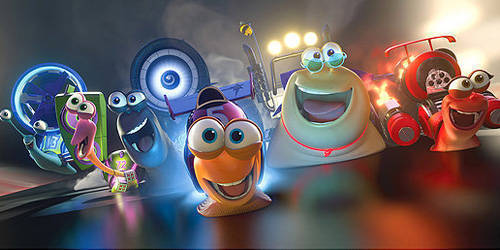 Cool kuhols are out to get you!

The eye-popping 3D moments. While Turbo isn't a wall-to-wall 3D spectacle like the two Kung Fu Panda movies and How To Train Your Dragon, it does have three brief sequences that showcase 3D's immersive, eye-gouging dimensionality to great effect: the accident that turns Theo into Turbo at the molecular level; Turbo's attempt to rescue his brother Chet (Paul Giamatti) from a troika of hungry crows; and the climactic Indy 500 race that pits Turbo against his human idol, Guy Gagne (Bill Hader).

The rundown strip mall. The middle section of Turbo takes Theo to the dilapidated Starlight Strip Mall in Van Nuys, Los Angeles. It's there that he meets Whiplash and his posse of racing snails, not to mention the Mexican brothers Tito (Michael Peña) and Angelo (Luis Guzman), owners of the struggling taco business Dos Bros Tacos. The unflattering portrayal of the area and its multi-ethnic, economically challenged working class occupants is something you don't normally see in a computer-animated movie, and it gives Turbo a unique texture I have yet to see in a Pixar movie. This isn't to say that the scenes that take place there are as gloomy and as depressing as news about soaring unemployment and stagnating economies. On hand to lighten things up with their antics are the snails (of course) and the human beings, the funniest one being the cranky old Vietnamese woman voiced by Hangover star Ken Jeong. 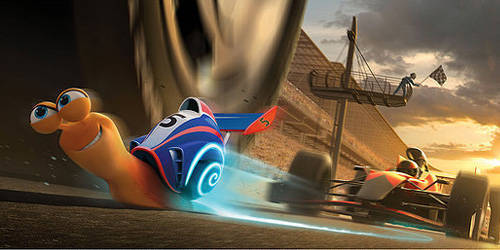 Cars in the form of snails, eh?

Déjà vu all over again. Nearly everything you see and hear in Turbo feels recycled. The garden scenes will trigger memories of Epic and A Bug's Life. The brat who likes to squish snails recalls Sid from Toy Story. The hallucinogenic appearances of race car driver Guy to his worshipper Theo echo chef Gusteau's ako-ang-iyong-konsensiya advice-giving to Remy in Ratatouille. And of course, the Indy 500 race scenes recall the visually superior Cars and Cars 2.

The clichéd life lessons. While children who haven't seen that many movies will certainly be happy to absorb the "no dreamer is too small" lesson the film espouses, those of us who are more advanced in years who have already seen hundreds of movies in our lives won't be as patient with the routine, formulaic script. None of the wisdom Turbo dispenses is as brilliant or as instantly quotable as Oogway's, "Today is a gift...that is why it is called the 'present'" line from Kung Fu Panda. Instead, we have rote statements like "No dream is too big and no dreamer is too small," which sounds like it was cobbled from Horton Hears A Who. 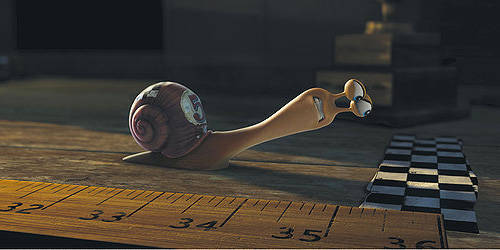 The dark Indy 500 sequence. During Turbo's climactic race, I  wondered if it was the 3D glasses which made the sequence look darker than you'd expect from your typical computer-animated movie. In many shots, the overcast skies looked gloomy and hinted of rain. And then, the end credits rolled and I saw why the scene was so moodily "lit": turns out that Wally Pfister, the cinematographer of Christopher Nolan's Dark Knight trilogy, was the "visual supervisor" of Turbo. And as much as I enjoyed the gritty and shadowy look Pfister gave the Batman movies, I would have preferred forTurbo's "lighting" design to be as bright and beckoning as Cars. It's a children's movie, for goodness' sake!

IN BRIEF: Cool and colorful snails combined with high-velocity racing action make Turbo a fun but familiar family flick, one which children will enjoy more than the grownups.