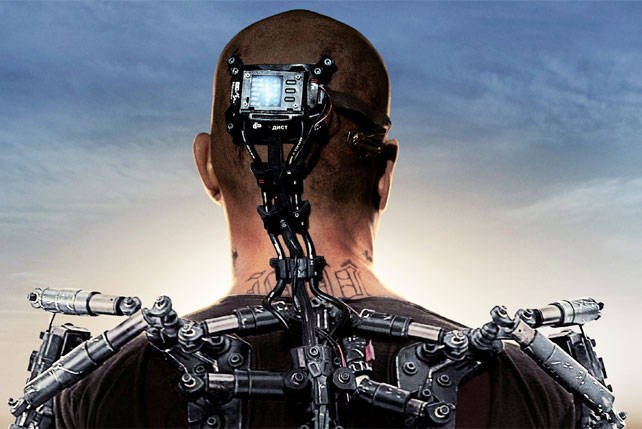 STORY: It's the year 2154, and the ultra-wealthy have fled Earth to live on an orbiting space station called Elysium. Among the many perks of living in this resort world for the elite are medical beds found in every home that can cure any disease in a matter of seconds. Thousands of miles away, on decaying, overpopulated Earth are the impoverished billions, one of whom is Max (Matt Damon). When Max is exposed to a lethal dose of radiation while at work, he's told by a robot medic that he only has five days to live. His only hope for a cure is to get to Elysium and use one of those medic beds.  But there's a big problem: Elysium's secretary of defence, the cold-hearted Delacourt (Jodie Foster), thinks nothing of destroying any spacecraft ferrying unwanted visitors to Elysium. With no other choice, a desperate Max seeks out a friend named Spider (Wagner Moura), who promises Max a ticket to Elysium provided he agrees to a dangerous mission that involves stealing the thoughts of a wealthy man. Max knows he'll die in five days anyway, so he accepts. Will all the threats he has to face, will he even set foot on Elysium?  Elysium is rated PG by the MTRCB for gruesome but stylized sci-fi violence and the occasional use of expletives. 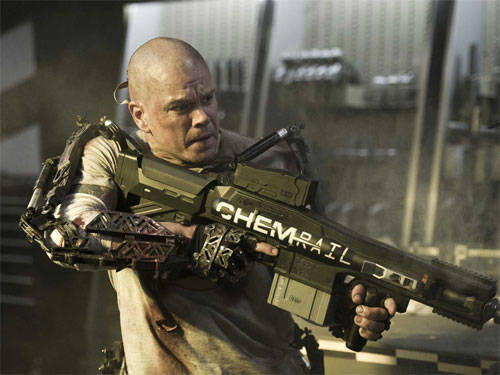 The timely story. Though Elysium is set in the year 2154, its preoccupation with the economic disparity between the haves and have-nots, especially with regards to their access to medical care, is very timely indeed. Add to this the fact that the film's writer/director was born in Johannesburg, South Africa, and that his previous film, District 9, was a metaphor for apartheid, and you have that rarity of rarities: a smart science fiction film that has aspires to do more than  simply entertain its audience. And with overcrowded slums, despair and misery becoming characters unto themselves in the film, there's a lot in Elysium that'll resonate even more with viewers like us who live in Third World countries.

A "bionic" Matt Damon. As factory worker Max, Matt Damon brings his nice guy persona to good use in Elysium, playing an everyman who's impossible to dislike even though he has grand theft auto in his police record. But that's just part of the fun of seeing Damon here. For more than half of the movie, Damon gets to kick butt like a Jason Bourne-Robocop hybrid in the movie's kick-ass action scenes thanks to the strength-enhancing exoskeleton that's grafted onto his body when he agrees to Spider's terms.

The Oscar-worthy visual effects. In the little-seen Disney animated feature Treasure Planet, what appears to be a crescent moon in the night sky reveals itself to be a gigantic, industrialized space station when the "camera" moves in for a closer look. Elysium takes this wondrous dream  shot to the next level by realizing it in live action, and revealing the space station to not merely be an industrial complex like the Death Star in Star Wars, but a vibrant paradise with flora & fauna, lagoons & swimming pools, mansions and playing fields. (And yes, it all looks even more spectacular in Imax.) But Elysium's visual effects don't score points only for showing us this futuristic, idealized world. Even more memorable is writer/director Neill Blomkamp's alarming vision of an overpopulated, slum-infested Los Angeles, where skyscraper shanties teeter on the verge of collapse like houses of ugly cards. For me, this prediction of what the earth will look like in 150 years is more prescient than the futuristic L.A. that Ridley Scott mesmerized us with in his influential Blade Runner. Don't think for one moment, though, that everything that's great about Elysium's visual effects are only of the production design variety. There are also amazing  gadgets on display, high-tech weapons, souped-up vehicles, and even a ghastly facial reconstruction machine.

Sharlto Copley as the despicable and hissable Kruger. From playing the good guy Wikus in District 9, the talented and versatile Sharlto Copley does a 180 to play the dastardly, bastardly bad guy hired by Jodie Foster's Delacourt to kill Max. And what a portrayal it is... I can't even remember when the last time was that I hated a movie villain as much as I did Kruger. This is a bad guy so chilling that he won't hesitate to torture a woman or a little girl to get what he wants. So despicable is he that writer/director Blomkamp even plays with our expectations of the kind of comeuppance that the seemingly unstoppable Kruger deserves, his fate in the face of death being one of the film's most audacious surprises. 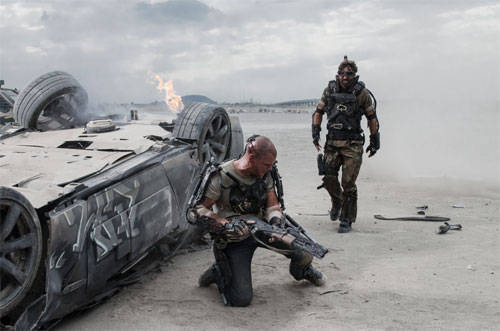 
Jodie Foster. Though the Elysium trailer gives no indication of it, you'll realize a few minutes into the movie itself that the Oscar-winning Silence of the Lambs actress is, for once, playing one of the villains. Alas, any excitement you might muster at the prospect of seeing Foster play the baddie will be doused by the strange, distracting accent she employs in her role as defence secretary Delacourt. Not helping any is a script that won't even give Foster a juicy scene from which to craft a memorable performance from, save for a Hitchcockian surprise that sadly, comes too late to do any good.

The clichés and lucky breaks. Though there are many story ingredients that feel fresh here, there are also cringe-inducing clichés that dull some of Elysium's shine. Winning the award for most unoriginal element in the film are the clichéd, maudlin flashbacks showing Max as a little boy, promising his BFF Frey (who grows up to become Sonia Braga) that he will take her to Elysium someday. Also unworthy of Blomkamp's talent are the instances where deus ex machina contrivances save Max from sticky spots. You'd think, for instance, that a hi-tech society in 2154 that employs rocket launchers that can hit targets thousands of miles from Earth  could also come up with an x-ray machine that could show when one mammal was hiding underneath another one from just a few meters away. Another story ingredient in Elysium that reeks of deus ex machina is the kind of character that's becoming a staple in many sci-fi flicks, namely, the computer hacker who can do impossible tasks in just a few seconds. Such overused character types and unbelievable coincidences prevent Elysium from becoming the masterpiece it could have been.


IN BRIEF: Though tainted by a sub-par performance from Jodie Foster and a script that relies too much on coincidence and cliché, Elysium is still the smartest sci-fi adventure to grace cinema screens so far this year.

Rating: 4 out of 5 spots âÂ€¢âÂ€¢âÂ€¢âÂ€¢ (Elysium doesn't get an additional half-spot for its Imax release. Although the landscapes look magnificent on the Imax screen, the many handheld shots employed in the L.A. action scenes may cause dizziness and headaches.)

Movie Review Elysium Jodiefoster Mattdamon
Your Guide to Thriving in This Strange New World
Staying
In? What to watch, what to eat, and where to shop from home
OR
Heading
Out? What you need to know to stay safe when heading out