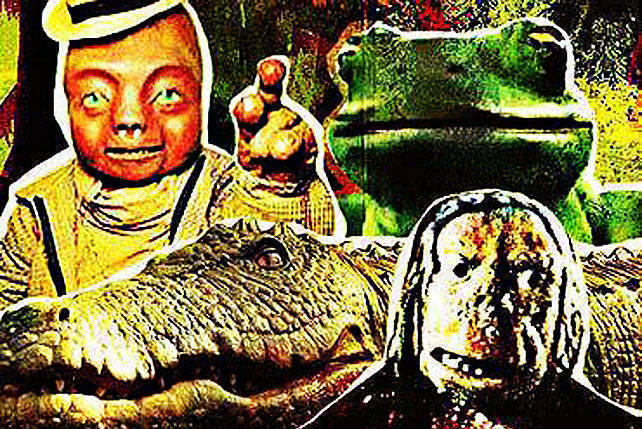 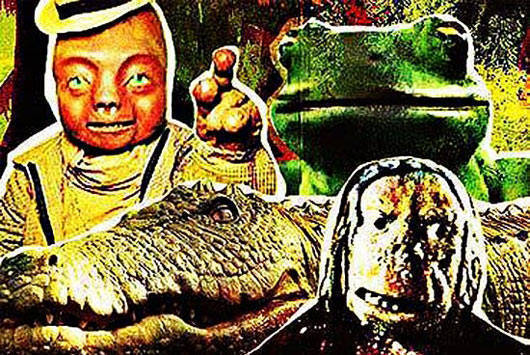 (SPOT.ph) First, the definition. "Monster," in any standard dictionary, is defined along the lines of "legendary," "grotesquely deviating from normal shape, behavior, or character." Connotations include frightening, outsized, preternatural, or just plain weird.

Ranging from the tiyanak to the diwata, creatures have always held a special place in Pinoy lore and pop culture. Monstrous mythological beliefs date as far back as the anito-worshipping days of our local ancestors. Centuries later, we find a whole nation currently fascinated by Lolong, the 21-foot-long crocodile found in Agusan del Sur, and his reptilian partner-at-large, Lalang.

Unfortunately, Lolong, is a few hundred years too late for his time. Primeval Pinoys considered the buwaya a dragon and worshipped it. Tribal chiefs or datus would go as far as punishing anyone who hurt the buwaya.

The list, however, is not enough to sate local clamor. Film and literature folk have found fresher, less conventional ways to fuel horror films, creating new archetypes and embracing creatures from giant amphibians to haunted appliances-the latter, by the way, is less kooky than it sounds. SPOT.ph joins the monster mania by rounding up the 10 most eccentric, most memorable local film fiends that give the "fly-by-night" aswang a run for its money.

Take the SPOT.ph Poll: Which movie monster do you miss most?

This article was originally published on September 15, 2011.

Watch how Zsazsa Zaturnnah defeats the giant frog from outerspace.

If there's one thing more legendary than Zsazsa Zaturnnah herself, it's this higanteng palaka-the super-gay superhero's first nemesis. Save for its supersized frame and 40-foot-long tongue, however, the giant palaka boasts no powers, making it no mean feat to defeat. Unfortunately, the vast amphibian was a mere decoy for the main villains-ultra-feministic alien Queen Femina Suarestellar Baroux and her posse Nora A., Vilma S, Sharon C., and Dina B. 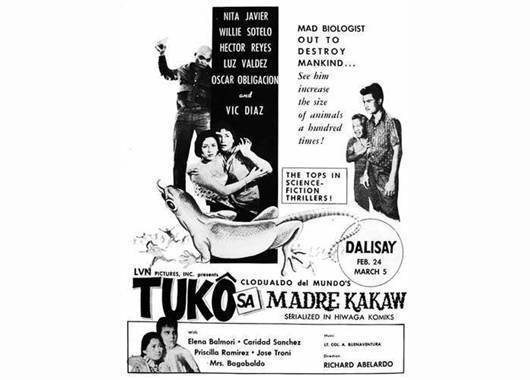 Or how a harmless lizard became a hellish monster. Photo courtesy of Video 48.

Ah, the old "scientist invents chemical and makes a huge, deadly beast" formula-it never gets old. Having giant lizards was a common horror film theme in 1959. The Giant Gila Monster, a low budget B movie produced in the US in the same year, featured a 70-foot poisonous Gila that likewise went on a killing and eating rampage. When will these scientists stop?

There’s more danger to trains than stepping over the yellow line.

In trains we expect crowds, chewing gum on seats, and at the very worst, pickpockets, but a monster? With qualities similar to the aswang, this blind, bald, and nameless creature hungers for hearts-and not in a touching Wizard of Oz Tin Man kind of way. When 13 commuters found themselves trapped in an abandoned LRT station, all they can do is hide and keep their hearts in the right place. 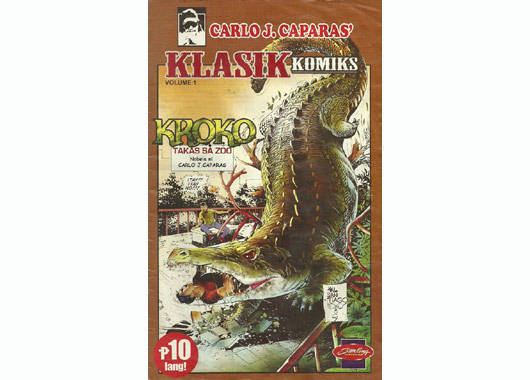 Kroko: Takas sa Zoo is a short-lived action-adventure series on IBC-13 about a destructive crocodile that hunts humans. It was adapted from a set of comics written by Carlo J. Caparas and illustrated by the great Hal Santiago. The series, directed by Caparas himself, starred his son and a laughable rubber croc that was more mocking than ferocious.

The country’s most beloved alien shakes it in this music video.

Some would argue against Kokey's monster status, but you have to admit that his appearance is slightly disturbing. Kokey, who hails from the planet Yekok, crash landed on Earth. As he salvaged his ship, he established friendly relationships with the humans he met. Unfortunately, his mortal enemy Korokoy managed to follow him and stole his most prized possession, a supernatural crystal. Kokey's adventure on Earth follows the fall of Korokoy and his reunion with his parents, Kakay and Kokoy. In the third installment of the franchise, Kokey @ Ako, the extra-terrestrial hero returns to Earth to find his little sister, Kekay. Kokey, Kekay, Korokoy, Kakay, and Kokoy-try saying that fast five times.

How would you feel if you were woken up from sound slumber? Angry, of course! This reptile-looking theropod was as peaceful as any other sleeping monster before it was disturbed, so it decided to go on a carnivorous eating spree. Apart from having a semi-original plot, the movie’s special effects were pretty realistic, too-for the '90s, anyway.

A cannibal, what?! In the season of giving, a man-eating Christmas tree is the last thing one would expect. This majestic tree grows in size every time it consumes a victim. Thinking of running away? Guess what, it has legs! You can't run, you can't hide, but you can throw acid-which turned out to be the only effective method to kill the ferocious flora.

Refs, television, which appliance will be haunted next?

This film did for refrigerators what Jaws did for the ocean. When you find a mutilated chicken inside your new house’s refrigerator, it’s a sign that something’s wrong. When you find a severed head inside, then you better go to the nearest appliance store and get a new one. Legendary director Ishmael Bernal’s haunted ice box lures attractive young women and kills them by slamming its door repeatedly on their already tortured bodies.

The stuff nightmares are made of, Undin is a scary reinvention of the Scottish sea nymph, Ondine. Undin set out on a murderous rampage after a rowdy gang destroyed her eggs. She killed the assailants one by one by dissolving them with her acidic saliva. Merciless and frightening as she is, we must understand that her killing spree was motivated by maternal instinct-Undin was just trying to be a good mother.

Reptiles can be misunderstood, too.

This question begs to be asked: What is it with Carlo J. Caparas and crocodiles? Apart from Kroko, Caparas also made another creature feature flick called Matatalim na Pangil sa Gubat (1986) which revolved around Putol, a lethal crocodile with a photographic memory. Thirty-feet long, telepathic, and flaunting old-school CGI, Bangis deviates from the usual rapacious reptile plot, and veers towards the gentle giant theme. After the croc was blamed for a series of brutal killings in the neighborhood, hunters started searching for the beast. It’s up to his only friend, a young boy named Eboy, to clear Bangis’ name. Talk about life imitating art.