The SPOT.ph Guide to the 19th French Film Festival at Greenbelt 3
Loading
Already a member? Log in
No account yet? Create Account
Spot.ph is your one-stop urban lifestyle guide to the best of Manila. 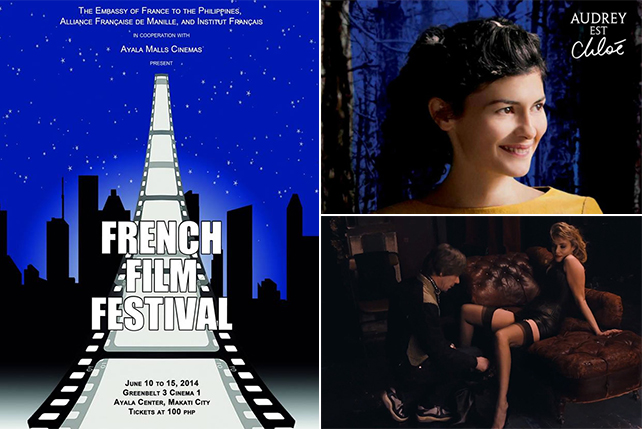 The SPOT.ph Guide to the 19th French Film Festival at Greenbelt 3

Polanski, Gondry, and...Brocka? Hold on to your berets, this year’s lineup might just sweep you off your feet 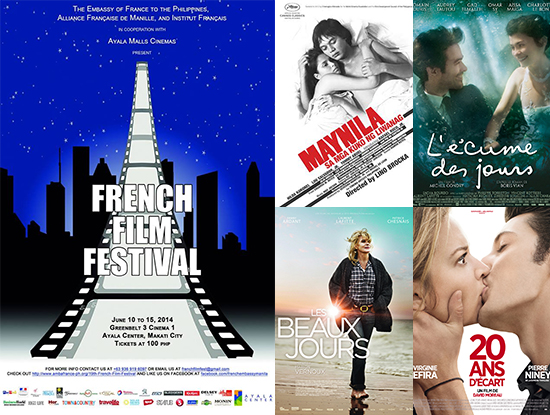 Without further adieu, here’s a quick guide to this year’s lineup.

What it's about: An uptight 38-year-old is advised to loosen up in order to become the Editor-in-Chief of Rebelle magazine. If they don't think she's young enough to be fun, she's going to date someone who is.

Good for: Laughing. The film is a mix of physical comedy and sharp dialogue, plus both lead characters are smoldering hot. If you've been too intimidated to watch a French film, this easy-to-digest rom-com could be the flint that sparks your interest in exploring more. Besides, aren't you curious about what French cougars are like?

Good for: Thinking. Is it passion or perversion? Polanski is an expert on both, guaranteeing a delightful discussion between the leads, Vanda and Thomas.

What it's about: Arthur Vlaminck is a young academic who joins the Ministry of Foreign and European Affairs and is quickly introduced to spinning and other zany political matters-presented in the film playfully, with style.

Good for: Chuckling. It's House of Cards, but with a brighter range of colors and less diabolical internal scheming. Or Scandal, but with less dramatic monologues.

What it's about: It has nothing to do with the 2009 Nancy Meyers film starring Meryl Streep, but it does follow the same geometric pattern (read: triangle). Ben is set to marry Juliette, but his high school crush (what) reappears in his life. So yes...it does get complicated?

Good for: Stoking the fires to the flame of misandry. Guys will always totally leave your for that hot girl who never paid attention to them. Like, totally.

What it's about: There are a lot of films about growing up, but only a few that talk about growing old. Fanny Ardant is cast as Caroline, dentist who just retired. While that seems to be the end of an adventure, Caroline embarks on a new one-with a man who isn't her husband. Racy.

Good for: Preparing. You never really picture your life as an old person-white hair, wrinkled skin. Despite what the Internet says, you're not going to be young forever.

What it's about: Literal healing hands. A man named Fredi is the reluctant recipient of a mysterious ability to heal people by touching them. He needs someone to touch him too.

What it's about: Hold on to your hearts because this is going to sound slightly ridiculous. The film follows the life of this famous pianist...who becomes the mistress of an electrician. You have to admit, it's slightly funny. It could work as a comedy-the director's actual forte.

Good for: Cardiac calisthenics. The story involves so many twists and turns, you'll feel like your heart did yoga.

Love is in the Air (French Title: Amour et turbulences)

What it's about: Ex-lovers Julie et Antoine find themselves sitting next to each other on a six-hour flight back to Paris, where they fell in love and then fell out. What's worse than being stuck with an ex you hate on a six-hour flight? Answer: finding out that he still loves you.

Good for: Snickering. You have to admit that it's an intriguing premise, potentially filled with a lot of opportunities for laugh out loud moments for when you don't want to take life seriously.

What it's about: It has Romain Duris and Audrey Tautou and it's directed by Michel Gondry. Nobody cares what this is about. There's a love story in there somewhere, once you've stopped being so distracted by everything happening onscreen.

Good for: Gondry-ing. You've missed him, and not in the Eternal Sunshine way. You miss him Science of Sleep style.

Tickets are sold for P100 on a first-come, first-served basis at Greenbelt 3. For inquiries, contact the Embassy of France to the Philippines at 0936-919-6097 or send an email to frenchfilmfest@gmail.com.

French Film Festival Greenbelt3 Frenchfilms
Your Guide to Thriving in This Strange New World
Staying
In? What to watch, what to eat, and where to shop from home
OR
Heading
Out? What you need to know to stay safe when heading out