Theater Review: The Return of Defending the Caveman

A perfect date-night play for new and old couples

The trailer for Defending the Caveman from 2011. Joel Trinidad is ready to be the brute once more!

(SPOT.ph) Seasoned theater actor Joel Trinidad returns to the stage as playwright Rob Becker's lovable caveman on June 13 at the Carlos P. Romulo Auditorium. Under the direction of Cathy Azanza-Dy, Trinidad is set to deliver a monologue that attempts to demystify the conflicts that arise when men come inside women's caves with their spears. All sexual innuendos intended.

There's an endless supply of jokes about men stabbing blindly in the dark and women being such...women, but Defending the Caveman manages to stay fresh by overcoming the urge to simply make fun of behavior. Despite being a little dated, the script offers valuable insight on how two people who are deeply in love can still drive each other crazy.

First staged in 1991, Caveman is currently the longest running one-man play in Broadway. Becker's research served him well, and the best part is that the audience benefits from his studies. It sounds painfully academic-using studies on evolutionary biology to explain dating and mating behavior-but it hits so close to home that anyone who has ever been in a relationship will instantly get the references and laugh. 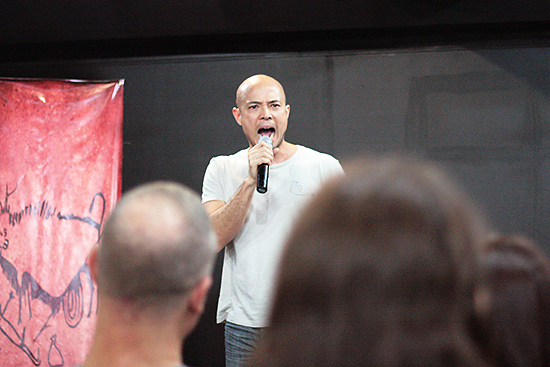 Trinidad during the rehearsal, "I am not an asshole!"

It'll be a riot for new and old couples, especially the more conventional ones. There's nothing offensive about the play, but it still operates under certain gender stereotypes. Women who don't enjoy shopping might just raise an eyebrow at the play's suggestion that a trip to the mall is exhilarating.

Still, Trinidad's delivery is so earnest and authentic that you're willing to forgive the omission of some truths. After all, you can always talk to your partner after the performance. Feel free to make fun of your girlfriend for being the mannish slob or tease your boyfriend for feeling bad when you didn't notice his new shoes.

Rcbcplaza Joeltrinidad Defendingthecaveman Theater
Your Guide to Thriving in This Strange New World
Staying
In? What to watch, what to eat, and where to shop from home
OR
Heading
Out? What you need to know to stay safe when heading out