10 Great Movies to Marathon Over the Long Weekend 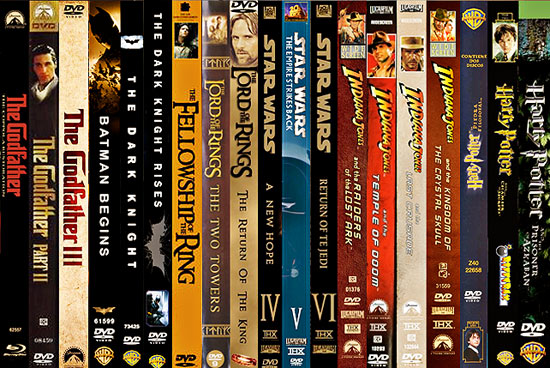 (SPOT.ph) After a long week, sometimes there’s nothing better than just staying in with a good movie or two. If you have a lot of time on your hands and have nowhere else to go, start a movie marathon. We’ve rounded up 10 awesome film franchises, ranging from a few hours to as good as two days. Grab the gang, a lot of snacks, and go easy on the bathroom breaks.

Five hours isn’t a lot of time compared to the rest of the franchises on this list, but after watching the love story of Celine and Jesse span more than nine years, you’ll feel like you’ve watched them forever. There’s no fear of disappointing sequels here; the subsequent movies are just as witty and heartfelt, with a dash of honesty and pretty European scenery. By the way, the inspiration behind this romance is very real.

Kick off your Halloween movie marathon with a Final Destination binge. It’s over seven hours of creative and bizarre ways for people to brutally die. The "villain" isn’t a slasher, monster, or vengeful ghost. It’s Death itself, and it really hammers in the idea that when it’s your time to go, there’s no escaping the inevitable.

Best for: Fans of gore and horror

Marathon bonus: Keep the bloody murders coming and watch the Saw franchise, which would set you back about eight hours. That’s a grand total of 15 hours of watching people die horrible deaths.

Director Christopher Nolan’s take on the Caped Crusader is noticeably darker and grittier, with an underlying theme of fear and chaos. It also gives us the unforgettable performance of Heath Ledger as the Joker. If you’re really on a Batman kick, dial it back several years and feast your eyes on campier predecessors, like director Tim Burton’s take and George Clooney’s nipples.

Indiana Jones is a solid film franchise full of action, history, and adventure. Harrison Ford plays an attractive and likeable archaelogist-slash-professor who isn’t afraid to get down and dirty to find the world’s most precious artifacts, including the Holy Grail. Indiana Jones and the Kingdom of the Crystal Skull is optional, but we don’t recommend it.

Best for: Adventure-seekers and those who want to ogle over young Harrison Ford

We’re just going to go right ahead and say it: if you want to change the way you see movies, see The Godfather trilogy. The story follows the fictional Corleone mafia family, and the rise and fall of the youngest son, Michael. The series kicks off with a movie that is widely considered a masterpiece, followed by what is probably the best sequel of all time, then ends with a pretty good third.

Best for: Those looking to binge on fantastic cinema

The Lord of the Rings

...Extended edition. Really, is there any other way to marathon The Lord of the Rings?  It’s an epic tale of good, evil, brotherhood, and the idea that even a hobbit can change the world. Immerse yourself in Peter Jackson’s stunning take on Middle Earth, and be prepared for plenty of walking. You can also throw in two The Hobbit films for good measure.

Estimated time to kill: 11 hours and 19 minutes or 17 hours and 30 minutes, prequels included

Best for: Tolkien fans, of course

Talking robots, cool light sabers, Hayden Christensen, and young Harrison Ford (again). What’s not to love about the Star Wars saga? George Lucas created a grand and exciting world built on complex themes like love, family, politics, philosophy and religion. Grab a bucketful of popcorn and make sure it will last; you’ll be glued to your screen.

Best for: Those who dream of a galaxy far, far away in the distant past

Marathon bonus: Keep the space adventures going and watch the 1979 Star Trek film onwards, which will take up another 23 hours of your time. Whew.

Even if the movies are guilty of veering away from the books, devoted fans still love its big-screen adaptations. Many of us grew up with Daniel Radcliffe and the rest of the young cast, so a rewatch today would probably feel like one vast throwback. One thing is for sure: This magical franchise will always make us wish we could brandish wands and go to Hogwarts.

If binge-watching superhero movies seems daunting or less than exciting, think again. You’re guaranteed variety and entertainment in this blockbuster universe. Start with Phase One, which encompasses all the films from the first Iron Man to the ensemble The Avengers. Take a quick bathroom break, refill your snacks, and get started on Phase Two, which includes Iron Man 3 and the game-changing espionage Captain America: The Winter Soldier.

50 years of James Bond has given viewers an iconic cocktail, enviable gadgets, double entendres, and beautiful women. Whether you’re watching Sean Connery, Roger Moore, or Daniel Craig, one thing is for sure: 007 is the epitome of a dashing and debonair secret spy who always gets the girl. If you just want to marathon a handful, we highly recommend Goldfinger, Skyfall, Casino Royale, and From Russia with Love. Or you can just check out Rolling Stone’s ranked list.

Estimated time to kill: 2 days and 14 minutes. Make sure to pace yourself!

Best for: Only the most devoted of Bond fans