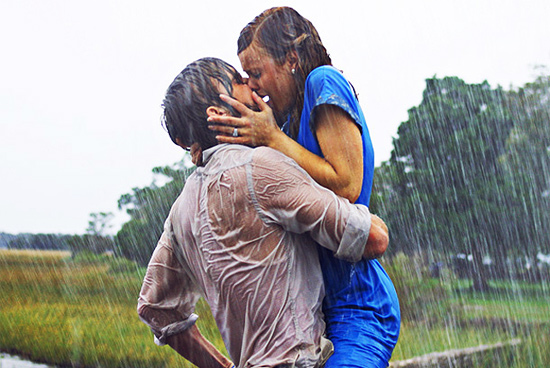 (SPOT.ph) In this country, we are all too familiar with that old saying, "When it rains, it pours." Then it floods, sometimes for hours on end. A little rain is enough to dampen plans (and spirits), but these 10 films prove that downpour might not exactly be a bad thing. In fact, it has cemented some of the most unforgettable moments in cinema.

Nothing underscores an important moment like rainfall. Andy Dufresne (Tim Robbins) is wrongfully convicted of a double murder, and he hatches an elaborate plan to escape. In one of the film’s final scenes, Andy escapes through the prison’s disgusting sewage system and flops onto a river. He raises his arms to the heavens and lets the rain wash him clean. You smell that, Andy? It’s not sewage waste. It’s the smell of freedom.

Director Sam Raimi’s 2002 take on the web-slinging hero gave audiences perhaps one of the most unforgettable kissing scenes of all time. After saving her life, Mary Jane (Kirsten Dunst) thanks an upside-down Spider-Man (Tobey Maguire) by planting a big one on him. The rain, of course, just adds to the romance of it all.

Aspiring music journalist William Miller (Patrick Fugit) is nearing the end of his stint covering the band, Stillwater. A plane carrying them to their next event encounters a thunderstorm so violent that it compels the band members to share long-held secrets. Just goes to show what a near-death experience can do.

Steven Spielberg’s Jurassic Park doesn’t get exciting until the second half, which naturally takes place during a night-time thunderstorm. It all starts with a trembling glass of water on the dashboard. The T-Rex then hops over the disabled electric fence, further amping up the tension. It gets worse when you realize that the storm has cut off any form of escape from the island, and the characters’ only safe haven from the deadly dinosaur are those measly tour jeeps.

Ridley Scott’s sci-fi flick is continuously fogged by downpour, but the final showdown between Rick Deckard (Harrison Ford) and Roy Batty (Rutger Hauer) is the highlight of the film’s rainy sequences. Roy’s dying words make the scene even more memorable: "I've seen things you people wouldn't believe. All those moments will be lost in time, like tears in the rain. Time to die."

The Lord of the Rings: The Two Towers

One of the most exciting sequences in the second The Lord of the Rings installment is the epic battle of Helm’s Deep, where thousands of Uruk-hai soldiers march in the mud to meet the Rohirrim, led by Aragorn. As they stand before the massive fortress, we see their breath in the cold air and the raindrops trickling down their armor. The rain transforms the gripping battle into a muddy brawl that we couldn’t tear our gazes from.

Sure, Lloyd Dobler (John Cusack) is best known for the boombox scene, but we can’t discount this romantic comedy classic’s rain scene. Lloyd has a breakdown after his romance with Diane Court (Ione Skye) ends. He calls his sister, Constance (Joan Cusack) and says, "I gave her my heart, she gave me a pen." The rain dramatically pours on poor Lloyd in the telephone booth as he has his life-changing epiphany. Bonus weather-related quote: "The rain on my car is a baptism!"

What’s more terrifying than a large group of unhinged military men mingling with a horde of very angry and bloodthirsty zombies? Throw a thunderstorm into the mix, and be prepared to run for your life. The sequence takes place inside a sprawling mansion, but it’s the flashes of lightning (and heartstopping score) that really punctuates the terror.

Fact: adding rain to a very passionate and pent-up kiss automatically makes it 50% hotter. Another fact: adding Ryan Gosling increases the hotness level exponentially. It still isn’t over for us either, Ryan. We’re still thinking about that scene.

Singin’ in the Rain

Don Lockwood (Gene Kelly) was so amped up after kissing Kathy Selden (Debbie Reynolds) that he couldn’t care less about getting wet or splashing around in puddles. We may not be as joyous as he is when the rain pours, but at least we can sing along to those catchy lyrics.