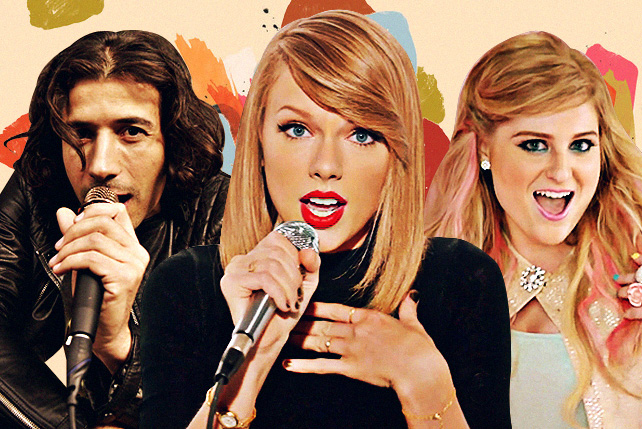 Songs we loved (and a few we loved to hate) by Taylor Swift, Meghan Trainor, Magic!, and more! 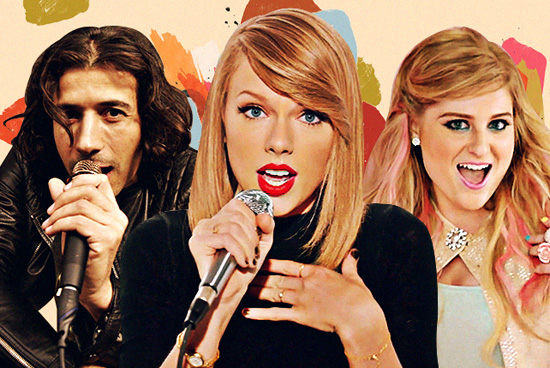 (SPOT.ph) 2014 didn’t fall short of giving us musical hits we’ll probably still be singing come next year. Remember 2013’s "Let It Go?" Yes, some songs can do that to you-give you LSS (or Last Song Syndrome) well after the year’s over, we mean.

With the right combination of elements-from catchy beats to quote-worthy lyrics-tunes can go from freshly dropped to instant hit overnight. Not all LSS-inducing songs are considered good, though. Just like anything else, there are ones that are so bad they’re actually good.

For this year’s list of the most LSS-inducing tracks, we put together songs that are too catchy to handle. Find out who made the cut to join Tay-Tay’s welcome-to-pop single, Meghan Trainor’s smash debut, and Magic!’s reggae-pop hit.

Song: "Shake It Off"

Plus factor: The release of the lead single from Tay-Tay's new album, 1989, marked her departure from her country pop beginnings. It was a make-or-break track that proved all the risks worthy. "Shake It Off" debuted at number one on the Billboard Hot 100 and has received 2015 Grammy Nominations for Song of the Year, Record of the Year, and Best Pop Solo Performance.

Plus factor: "All About That Bass" is such a bad song that it’s good. The bubblegum pop track, American singer Meghan Trainor’s smash debut, is hella catchy with some throwback doo-wop and nasal vocals. Props to Trainor, too, for promoting positive body image no matter what your size.

LSS-inducing lyrics: Why you gotta be so rude? / Don’t you know I’m human, too?

Plus factor: Reggae is just naturally catchy, and Canadian band Magic! knows that. "Rude" combines offbeat reggae rhythms, a danceable tempo, and a relatable back story.

LSS-inducing lyrics: Are you, are you coming to the tree?

Plus factor: The Hunger Games Mockingjay Part 1 soundtrack is sang by J. Law, and she sounds incredible. (Is there anything she can’t do?!) There’s an impressive country twang to her effortless singing in this eerie, Lumineers-penned track.

Song: "Turn Down for What"

LSS-inducing lyrics: Turn down for what?

Plus factor: "Turn Down for What" is another mindlessly written club anthem lucky enough to have a sick beat. But lyricism is of second (or maybe of least) importance when it comes to songs like this. As long as we can dance to it while inebriated, we’ll take it.

Plus factor: Australian artist Iggy Azalea comes up with songs so easy to rap along to that it’s natural to get hooked. In "Fancy," the fourth single off her debut studio album titled The New Classic, English singer-songwriter Charli XCX aids Azalea and delivers an LSS-worthy chorus.

Plus factor: How can you not get LSS with this track’s sampling of Sir Mix-a-Lot’s "Baby Got Back?" "Anaconda" also reminds us of Nicki Minaj’s hip-hop styling, which took the backseat in her previous pop-heavy releases.

Song: "Everything is Awesome"

Plus factor: "Everything is Awesome" proves that simpler really can be better. The LEGO Movie promotional track is straightforward. There’s nothing poetic about the song, which actually borders on irritating with its gamified tune and electro-enhanced vocals. But it’s still a feel-good track to get you up and running in the morning.

Plus factor: "Chandelier" is tough LSS to have as LSS, no thanks to Australian artist Sia’s powerful vocals. But aside from the singing and deep lyricism of the song, "Chandelier" comes with a moving music video starring young dancer Maddie Ziegler. The track earned Sia Grammy nominations for Best Short Form Music Video, Record of the Year, Song of the Year, and Best Pop Solo Performance.

LSS-inducing lyrics: Bang bang into the room (I know you want it) / Bang bang all over you (I’ll let you have it).

Erratum: The first version of this article identified Jessie J’s third studio album as My Everything. This has been corrected.

Music Lss 2014 Songs
Your Guide to Thriving in This Strange New World
Staying
In? What to watch, what to eat, and where to shop from home
OR
Heading
Out? What you need to know to stay safe when heading out