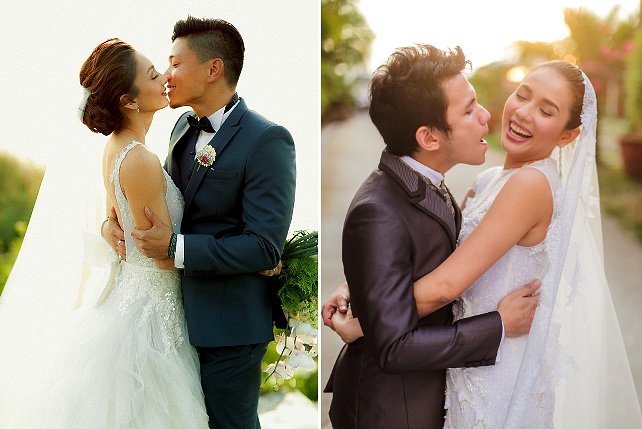 It’s been a good year for romance...and wedding planners. 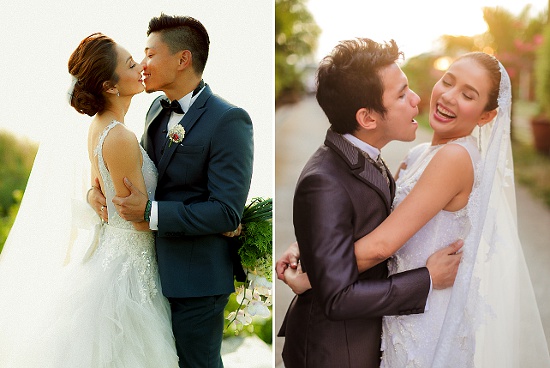 (SPOT.ph) Whether your stone-cold heart is willing to admit it or not, everyone loves attending weddings. Sure, it would probably be a hassle trying to find the perfect gift but hey, it’s a chance to dress up and eat (for free, mind you). It’s safe to say that 2014 was the year of celebrity weddings. Whether it was an intimate gathering or a grand spectacle, the photos and unique invites were enough to make us wish we could have been there.

Also read: The Juiciest Pinoy Celebrity Hookups and Breakups of 2014

If you’ve ever dreamt of a romantic beach-themed wedding, you’d probably want to take a cue from Jericho Rosales and Kim Jones. The duo paid homage to their shared love for the sand and sea with a beautiful ceremony in Shangri-La’s Boracay Resort and Spa. Rosales wore a suit by Francis Libiran, while Jones donned a Vania Romoff gown. Just check out that adorable wedding invite and lush garden with swaying palm trees!

What do you get when you take a garden in Tagaytay, decor with a quirky and homey vibe, and celebrity Ramon Bautista as the man officiating the ceremony? You get Parokya ni Edgar front man and actress Neri Naig’s fun civil wedding. By the way, some people say they spotted a ghost while the newlyweds were cutting the cake, which only fuels our wish to be there so we could see it for ourselves.

A few days before the couple’s scheduled wedding date, JC Intal and Bianca Gonzalez tied the knot in an intimate ceremony in Palawan. The quiet and unannounced affair was a far cry from Intal’s very public proposal, but it didn’t make fans swoon any less. Really, who wouldn’t want to wed in El Nido?

Just when we thought this travel-loving duo couldn’t top their much-talked about pre-nup shoot, their actual wedding had many fans teary-eyed. (Just wait till you get to the vows. We recommend preparing a box of tissues.) The Nasugbu, Batangas wedding comes after nine steady years of dating.

It was a star-studded affair for Spongecola frontman Yael Yuzon and TV host-slash-singer Karylle. Their guest list? Kris Aquino, Kim Atienza, Anne Curtis, and Sharon Cuneta are just some of the famous faces that made an appearance. According to posts from social media, the bride’s entourage wore floral dresses, while Gary Valenciano serenaded guests in the chapel.

After a public onstage proposal in February, Aiza Seguerra and Liza Diño legally exchanged "I Do’s" in a small, private ceremony in California. Their wedding preparations were largely DIY, so if you’re looking to do get creative with your own wedding, you’d probably want to check theirs out.

This couple’s love story is definite proof that it’s never too late for love. (The groom was 75, while the bride was 69.) The two were married by Cardinal Luis Antonio Tagle at the Archbishop’s Palace on June 14. The moral of the story? Take a chance at love. All together now...awww.

The aforementioned lesson on love extends to TV host Amy Perez, who gave marriage another shot with her partner of eight years, Carlo Castillo. The gorgeous garden wedding was held at the Mango Farm in Antipolo as celebrities from Agot Isidro to Christine Babao and Robin Padilla looked on. By the way, both their wedding and invites featured cute, bright pink Vespas!

After five years of dating and one year of being engaged, Joross Gamboa and Katz Saga finally exchanged vows in a Christian ceremony at Fernbrook Gardens, Alabang, Muntinlupa City. Among their famous guests were John Lloyd Cruz, Sandara Park, Melissa Ricks, and director Cathy Garcia-Molina. For more photos, check out PEP.ph.

Everyone is gearing up for what has been dubbed the "Wedding of the Year." Dingdong Dantes and Marian Rivera are set to tie the knot on December 30 at Immaculate Conception Cathedral in Cubao, Quezon City. A grandiose reception will follow at the Mall of Asia Arena. To tide eager fans over, you can still visit the official wedding site for all the details, from the wedding invites to special features.

Weddings 2014 Humor
Your Guide to Thriving in This Strange New World
Staying
In? What to watch, what to eat, and where to shop from home
OR
Heading
Out? What you need to know to stay safe when heading out