10 Gigs and Parties to Go to This Week: February 24 to March 1
Loading
Already a member? Log in
No account yet? Create Account
Spot.ph is your one-stop urban lifestyle guide to the best of Manila. 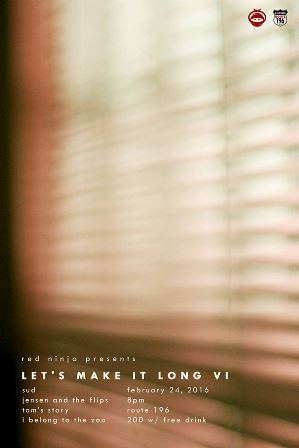 Why you should go: It's the last of the Let's Make It Long series until Red Ninja Production’s anniversary so they chose a few of their favorite bands for you, including I Belong To The Zoo, Jensen & The Flips, Sud, and Tom’s Story. 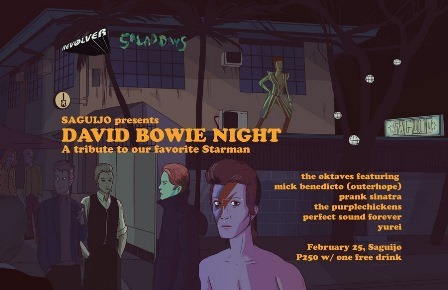 Why you should go: Everyone’s favorite Starman continues to live on in the hearts of musicians so here’s another tribute night to celebrate his music. Catch the covers by Oktaves featuring Mick Benedicto of Outerhope, The Purplechickens, Yūrei, Prank Sinatra, and Perfect Sound Forever. 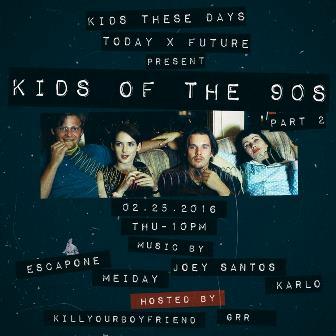 Why you should go: Reminisce all things '90s in this themed party with DJ sets by Es Belargo for hip-hop and R&B music, Joey Santos for pop music, Mei MeiBastes for alternative music, and Karlo Vicente for dance music.

Other details: Party starts at 10 p.m. For inquiries or reservations, e-mail todayxfuture@gmail.com. 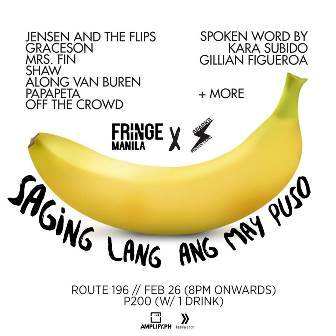 Why you should go: The month of love is about to end but that doesn’t mean that love songs will go out of style. Catch music by Jensen and The Flips, Graceson, Papapeta, Off The Crowd, Along Van Buren, Shaw, and Mrs. Fin. There will also be spoken word performances by Kara Subido and Gillian Figueroa to bring out the feels in you.

Other details: Doors open at 7 p.m. Entrance is P200, inclusive of one drink. 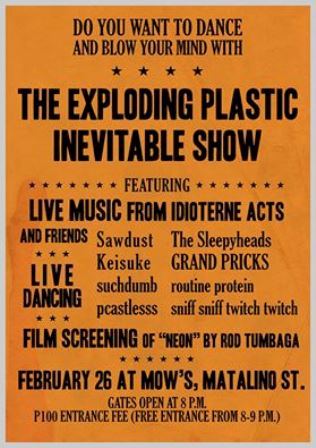 Why you should go: This show has so much lined up for its attendees, including the screening of Rod Tumbaga's Black Beret-award winning short film, "Neon.” Music will be courtesy of Sawdust, Keisuke & Alix, Suchdumb, The Sleepyheads, and more. Then there will be dancing and partying all night long. 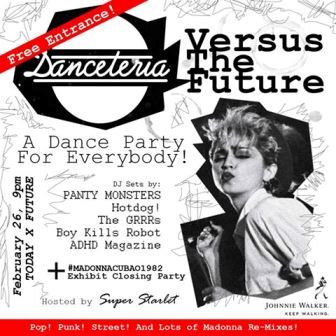 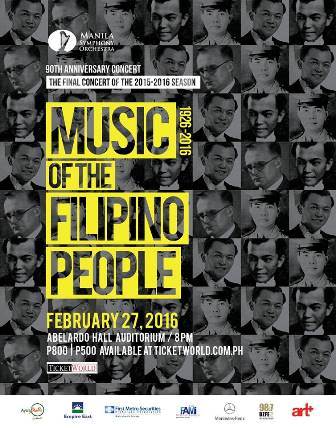 Music of the Filipino People

Where: Abelardo Hall, University of the Philippines Diliman, College of Music

Why you should go: This concert is the culminating event in Manila Symphony Orchestra's 2015-2016 Season, Music Everywhere and their 90th Anniversary. Music of the Filipino People pays respect to the first Philippine symphony ever written, Symphony in C by Philippine National Artist for Music Lt. Colonel Antonino Buenaventura, and more. 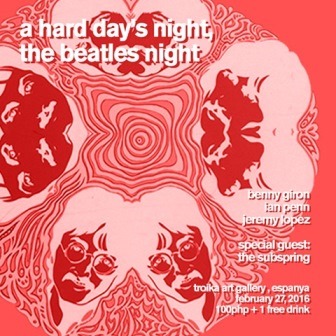 Why you should go: The third leg of "The Road to Intramuros Rising 4" happens at Troika this Saturday with a very special theme. Catch Benny Giron of BennyBunnyBand, Ian Penn, and Jeremy Lopez of Kissling share the stage and play songs by The Beatles.

Other details: Doors open at 7 p.m. P100 at the door inclusive of one drink. RSVP here. 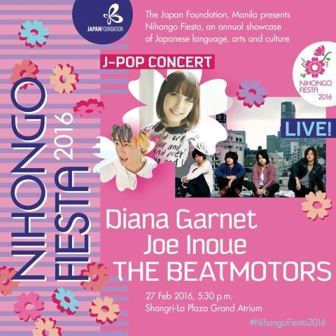 Why you should go: Japan Foundation Manila presents Spinning Manila: J-Pop Live with Japanese artists such as Diana Garnet, Joe Inoue, and The Beatmotors!

Other details: Event starts at 5 p.m. Admission is free, but online registration is required.

Why you should go: Another chill Tuesday coming your way featuring Aia De Leon, Howard Luistro of Oh, Flamingo, Mariah Reodica or The Buildings, and more.