Cougars vs. Sex Kittens at FHM X: Who got the loudest hoots?

The NBC Tent howled as FHM’s hottest took the stage. But amidst the young, flirtatious faces, the cougars held their own.

FHM (For Him Magazine) celebrated its 10th anniversary by throwing an exclusive party launching their thickest release to date, the Special Collector’s Edition 10th Anniversary Issue. The stage sizzled at the NBC tent on March 12, Thursday, as past FHM cover girls strutted down the aisle to hordes of screaming men (and surprisingly, women). 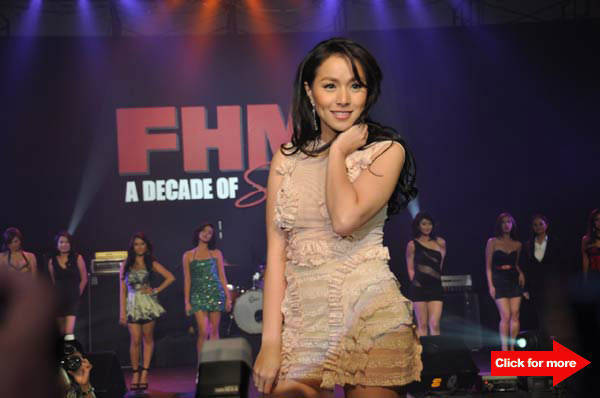 The tent boomed with rambunctious cheers as cougars Jean Garcia, 41 and Eula Valdez, 43 took the catwalk by storm-Garcia in a tight black dress and Valdez leaving everything to the imagination in a pantsuit, proof of the Pinoy Male’s penchant for the older woman. Rounding up the 25 Sexiest Women of the Decade were Viva Hot Babes member Katya Santos, a corset-clad Aubrey Miles, Francine Prieto, Valerie Concepcion, Katrina Halili, 2009’s sexiest Cristine Reyes, and March cover girls Bangs Garcia and Iwa Moto.

SPOT.ph wants to know: Who is your Sexiest Woman of the Decade?