Echo was once a fish vendor and other tales of inspiration from the newest Chowking ambassadors. 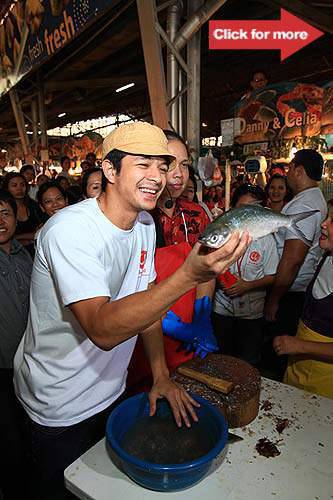 Actors Jericho Rosales, Kim Chiu and Gerald Anderson, and CNN Hero of the Year Efren Peñaflorida told their stories of triumph as the new Chowking Ambassadors of Success at a press conference last week. Each of the ambassadors, sans Bea Alonzo who had prior commitments, took some members of the press on a tour of certain chapters of their lives.

Showing off the "fishy" prowess he learned as a kid to help his family survive financially, Rosales taught some media people how to clean fish at the Farmers’ Market in Cubao a few hours before the press conference. "Para sa akin madali na lang. Kailangan lang ng practice (I find cleaning fish easy to do. You just need to practice it)." At the press conference later that day, he shared how draining it was to sell fish in the market with his mother, and how he once found comfort in being able to buy a G.I. Joe action figure after three days of market duties. Asked by host Tintin Bersola-Babao what the most difficult part of selling fish was, Rosales quipped, "Nung hinanapan nila ako ng baboy (When people asked me for some pork)."

Efren Peñaflorida, who was awarded CNN Hero of the Year in 2009 because of his tireless efforts to teach street children through innovative kariton (pushcart) classrooms, taught press people how to become "pushers for a good cause." With the Dynamic Teen Company he formed at the age of 16, Peñaflorida schooled some kids at a barangay near Farmers Market. Kuya Ef, as he is fondly called, also gave away school supplies and food.

For the last leg of the press tour, Pinoy Big Brother (PBB) Teen Edition alumni Gerald Anderson and Kim Chiu hosted a "Chicharap Eating Challenge" inside a simulated version of the PBB house confession room. The pair, now one of the most in demand love teams only four years after they exited the PBB house, treats the reality show stint as their big break. Anderson recounted that he did not know his "place in this world" prior to joining the show, while Chiu was surprised how a "fun audition with friends" has turned into a "life-altering experience."

Undoubtedly making a name for themselves in their own fields, the Chowking brand advocates see success as more than possessing material wealth. "Nabubulok at nasisira ang mga materyal na bagay. (Material things don’t last.) So, for me, success means knowing you have a purpose and fulfilling that purpose," Rosales said. For Peñaflorida, success is beyond being awarded CNN Hero of the Year and other recognitions. "Mas fulfilling on my part to see a child na marunong magbasa at magsulat (It’s more fulfilling to see a child who can read and write)."

Now that she has helped her family with her fame and fortune, Chiu is determined to hold on to her star status. "Andiyan na siya, huwag ko lang bibitawan. Aalagaan ko lang (I won’t let go of the success I’m experiencing right now. I will nurture it)." 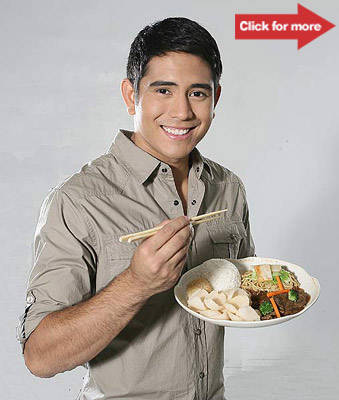 Gerald Anderson enjoys Chowking’s latest offering, the Tender Beef Broccoli (P99 with a drink and P125 as a lauriat with pancit canton, chicharap, fried dumpling, buchi and a drink). Click for more photos.

Though the Chowking Ambassadors are enjoying the success they have right now, they all want to achieve more. Peñaflorida wants to continue using his skills to help children. Actor-singer-producer Rosales aspires to continue producing albums, TV shows and concerts, and produce a movie in the future. He said, "Kung gusto mong tikman ang tagumpay, every day dapat may certain goal ka (If you want to become successful, you should have a certain goal every single day)." Anderson wishes to do more inspiring projects, citing an episode of Maalaala Mo Kaya in which he played a person with Tourette’s syndrome. Chiu simply wants to remain happy.

Photos by Noel Orsal of PEP.ph and courtesy of Chowking.