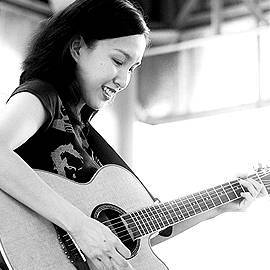 On the Spot: Barbie Almalbis

The singer-songwriter is back with a brand new album.

(SPOT.ph) After being away from the local music scene for some time, singer-songwriter Barbie Almalbis is back with a new album titled Goodbye My Shadow. The musician who burst into the local music scene in 1997 as part of the three-piece alternative rock act Hungry Young Poets captured people's hearts and ears with her endearing voice and simple beauty. In 1999, the vocalist-slash-guitarist went off to successfully establish a new group, Barbie's Cradle. In 2005, Barbie went solo, and the year after, she wed Martin Honasan, Senator Gringo Honasan's son. Eventually, domesticity soon took over, and Barbie semi-disappeared from the scene to focus on her family-she has two kids: Stina, 4, and Liam, 1. 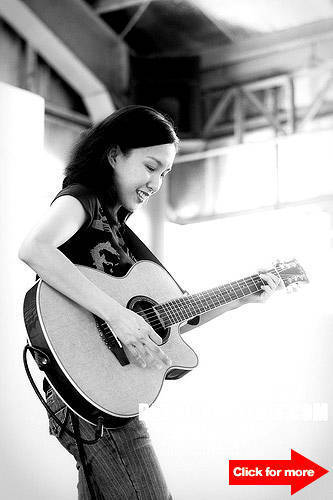 In her latest offering, an 11-track CD of her newest and most honest material, it's evident that she's still got amazing talent and unrelenting passion. Her new tunes are fresh and inspired-it's hard to believe she's logged in more the 10 years in the industry.

SPOT.ph caught up with the 33-year-old musician talk about Goodbye My Shadow and more.

How many years have you been away from the music scene and what were you up to during that time?

I haven’t really been on a complete hiatus because I have been writing songs and learning more about guitar playing, as well as tinkering with the guts of the guitar and pedals. I’ve also been studying home recording, as most of my parts in this album were done at home.

My family is definitely God’s sweetest blessing! I am overwhelmed with love and truly grateful for God’s faithfulness everyday. Raising kids is challenging but truly fulfilling and a lot of fun-we're having quite an adventure together. Music is a big part of our family too.

How do you juggle your time between music and being a wife and mom?

I have to keep a calendar now. I used to be a very carefree person, but now I have to plan things more strategically. Having a very organized husband really helps me get things done. But despite the fact that there are so many things going on, I don’t really compartmentalize my life, I don’t separate my ’musician hat' from ’wife/mom hat.’  We involve each other in whatever we do as much we can. Whatever we’re called to do, we’re called as a family.

The music video for Goodbye My Shadow

What made you decide to return to the music industry with a new album?

Recording has always been one of my favorite parts of being a musician, and I have been writing and collecting songs all these years. We really couldn’t wait to get started making and recording new songs.

What can we expect from this album?

I feel so blessed to have a great working relationship with my label (12 stone records), it’s the first time a label has actually given me total freedom with the music, without any burden to be commercial, just trusting us with the music. So the band and I really had the freedom to experiment and express ourselves with the songs.  We also got to work with an amazing producer, Maly Andres, who was a big part in the recording process. He really pushed me when he thought I could do better, but also restrained us to keep us from overworking and cluttering the songs. It was a lot of work. It took us about a year to finish the album. As far as song writing goes, it may still be familiar, but the production and arrangements bring something very new to the table. Our sound now really is a collaboration of the band (with Karel Honasan on bass and Alden Abaca on drums). Alden is a monster drummer with great rock and roll sensibilities, and Karel is an amazing bass player, and is a genius when it comes to arranging songs. We’ve gotten to gig as a band for about two to three years now, and it’s sort of back to the roots for me-that live three-piece alternative rock and roll sound is in a lot of the new songs.

When did you write the songs?

I continuously write songs and have never stopped, though some seasons when I’m very busy, I only get to write a few. Most of my songs start with a guitar riff or a chord progression, then, I make the lyrics and melody simultaneously. Also, as soon as a melody pops in my head, I record it immediately on my phone. I have a library of drafts, some are pretty much done and others still half-baked. I chose my favorites for this album.

What was your inspiration for this album?

How would you describe the songs on the album?

The topics in the songs are all from personal experiences. The collection of songs in the album, having been written within a span of more than five years, sound different from each other but the band arrangement sort of tie them together into one cohesive thing.

What’s your favorite song on the album?

The song "Constellations," which I wrote about my husband, Martin, is one of my favorites. What you hear in the album is very close to the original draft recording I made on my laptop when I wrote it. There are some moments and ideas that get captured in demos but sometimes get lost from over-producing and over-working a song, I’m glad we got to preserve what I loved about the original version of this song.

If you were to describe the album in one word, what word would it be?

Goodbye My Shadow (P299) is available at all Odyssey outlets and at Barbie's gigs. Check Barbie's gig schedule here.