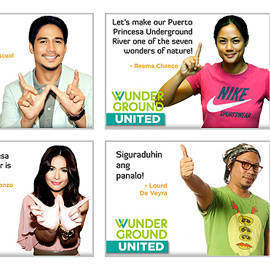 Celebrity advocates show their support for the Puerto Princesa Underground River in this star-studded campaign. 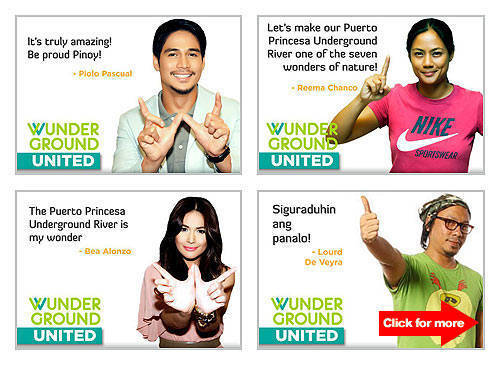 A star-studded effort by Wunderground United shows the celebs rooting for the Puerto Princesa Underground River to become one of the New 7 Wonders of Nature. Click for more.

Out of over 400 nominees, the Puerto Princesa Underground River is one of 28 finalists in the running for becoming one of seven new sumbols of nature and heritage in the world-competing against the Amazon in South America, Galapagos in Ecuador, Grand Canyon in USA, Great Barrier Reef in Australia, Kilimanjaro in Tanzania, and Bay of Fundy in Canada, to name a few. The Philippine contender, located 50 kilometers north of the city of Puerto Princesa in Palawan, is regarded as the longest underground river in the world. It features major stalactites and stalagmites formations and several chambers, and leads through a cave before flowing to the South China Sea.

Voting is until November 10 and results will be announced on November 11. To vote, you may log on to www.new7wonders.com/vote-2 or text PPUR to 2861.