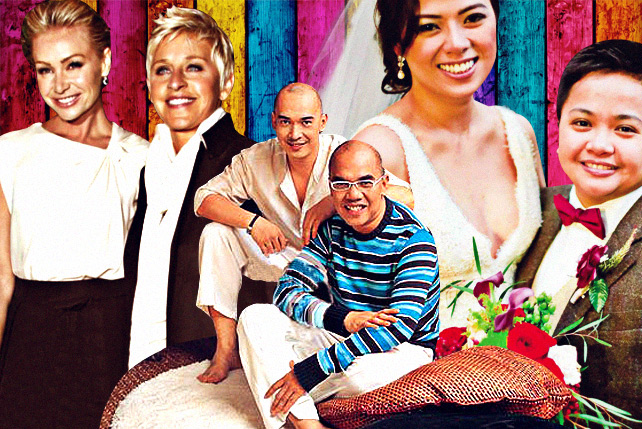 To celebrate the fact that #LoveWins 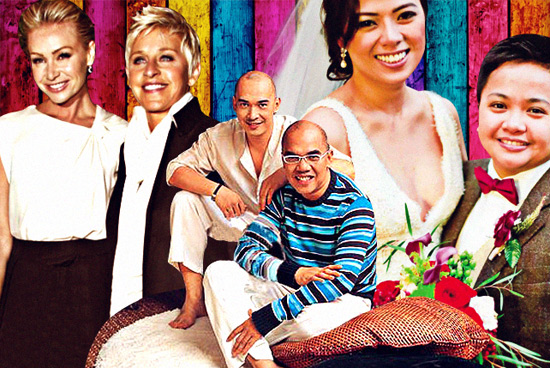 (SPOT.ph) Love comes in all shapes and forms. Sometimes, it's platonic love between two long-time friends. Other times, it's the love between a parent and a child. And yes, it could even be the love between two people from the LGBT community. Pride Month may be over, but that doesn't mean we can't celebrate equality all year round. Here are 10 celebrity couples who give us the warm fuzzies and redefine what love is.

Ellen and Portia's relationship has outlasted many Hollywood hook-ups, spanning over a decade. (They've been married for six years.) Earlier this year, rumors broke out that they were headed to splitsville but from the looks of it, they're going pretty strong...so strong that Portia has even joked about "divorcing again." If you're wondering if the two will ever have kids, it's probably not going to happen anytime soon. That's okay, too.

You can say George and Brad's relationship, ahem, lived long and prosperously. The Star Trek actor met his future husband in a gay running club in Los Angeles back in the '80s. They soon went from partners on the track to secret partners for 18 years, until George publicly came out in 2005. Three years later, they were married. All in all, that's 27 years and counting!

Filmmakers Jun Lana and Perci Intalan were together for 10 years before they walked down the aisle in 2013. They met through a mutual friend in 2003 but just like real life, sparks didn't immediately fly. They eventually crossed paths again and the rest, as they say, is history. The two were married under New York's same-sex marriage law.

Miss Gay Manila Trixie Maristela has been in a relationship with her non-showbiz boyfriend for six years now. Trixie never hid the fact that she was a trans woman, but they both had to keep it a secret until Trixie joined Eat Bulaga's trans pageant, Super Sireyna. Art has previously spoken about his relationship with Trixie, saying, "Being with Trixie exposed me to the plight not just of trans women but of LGBT people in general. Being gender deviant doesn’t make you any less capable of contributing to the society and taking care of a family and living a normal life."

Compared to the rest of his Hollywood peers, Matt Bomer is pretty private. The White Collar and Magic Mike actor publicly came out in 2012 and two years later, revealed that he has been married to his partner Simon Halls since 2011. In his coming out speech, he referred to Simon as his "smarter half" and inspiration. They have three sons.

Aiza and Liza first met in 1998 through the latter's then-boyfriend. Even as friends, they reportedly felt a special connection. They went separate ways to pursue their careers, with Liza moving to the U.S. and getting married. When her marriage didn't work out, she returned to the Philippines in 2013. All it took was a few Twitter conversations to rekindle the flame. They exchanged vows twice: first in the U.S. then a symbolic ceremony in Batangas a month later. Liza has a daughter from a previous relationship, whom Aiza considers as his own. They plan to have more kids through in vitro fertilization.

These two have been together since 1993. (For perspective: That's almost as old as Miley Cyrus.) The two entered a civil partnership in 2005, and exchanged vows in 2014 after same-sex marriage was legalized in the United Kingdom. In a previous interview, Sir Elton shared that they still work to keep their relationship going. "Every Saturday for 16 years, we've sent each other a card, no matter where we are in the world, to say how much we love each other," he said.

Things weren't as smooth for stand-up comic and actress Wanda Sykes. She came out to her conservative parents at the age of 40, and has openly spoken about their strained relationship (they declined to attend her 2008 wedding with Alex). In a later interview with Oprah, she said they have since patched things up and they now play proud grandparents to Wanda and Alex's two children. The couple met in 2006, and have been going strong ever since. 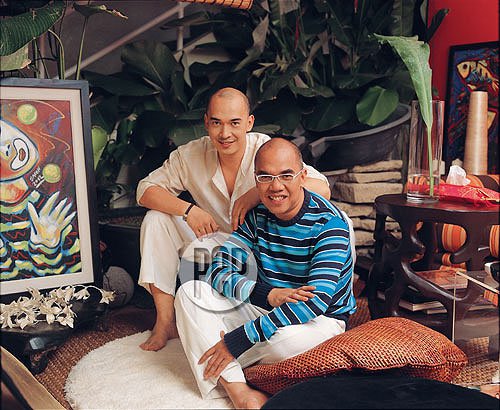 Boy and Bong have been together for 31 years. That's a rarity when you work in show business. Boy has admitted that it wasn't always easy going the distance, saying it was difficult going to Bong's house because he was raised in an "extremely macho, athletic family." Difficulties aside, we love how they motivate each other. When Boy finished his undergraduate and MA degrees, this inspired Bong to pursue his own studies.

This happy family dates back to 2004, when they met through a common friend. Just like any relationship, it's had its ups and downs, but NPH has said that having kids made him fall in love with David all over again. In fact, the latter summed it up quite nicely, saying, "I don’t want people to think we’re a perfect couple. Nothing’s perfect. A relationship is work and it changes. And you go with the changes." The two were married in 2014 and have twins via surrogate.

Lgbt Lgbt Couples
Your Guide to Thriving in This Strange New World
Staying
In? What to watch, what to eat, and where to shop from home
OR
Heading
Out? What you need to know to stay safe when heading out