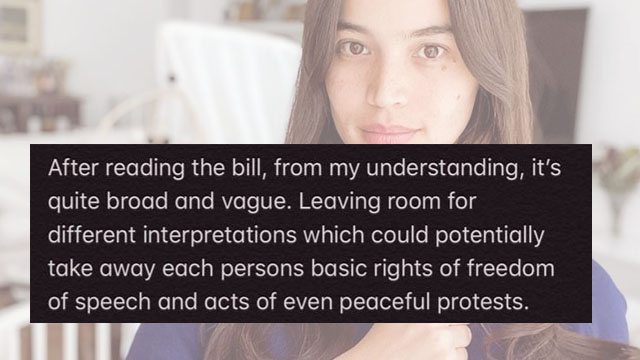 These Local Celebs Have Something to Say About #JunkTerrorBillNow

The likes of Anne Curtis, Catriona Gray, and more.

(SPOT.ph) All the controversial Anti-Terror Bill needs now is President Rodrigo Duterte's signature to become a law. Congress approved the senate version of the bill—which seeks to amend the Human Security Act of 2007—on June 3 by the House of Representatives; The upper house and final version, Senate Bill Number 1083, was approved on February 26.

The bill is being touted as a strengthened "legal backbone" for our justice system to deal with actual and probable acts of terrorism. "Those who have committed, are about to commit, or are supporting those who commit terroristic acts should be prosecuted and penalized accordingly," senator Panfilo "Ping" Lacson, sponsor of the measure, was quoted as saying in an official statement. Our 1987 Philippine Constitution is built around the principle of "assumed innocence," a.k.a. "innocent until proven guilty," and not the other way around.

It has been hit by several critics for the alleged human rights' violations. Section 18 of the bill in its latest form states that the written order of the Court of Appeals—detailing the identity of a person under surveillance, the reasons for their surveillance (i.e. the questionable acts that have or might be done), and the length of time which they may be followed—are classified information. Section 29 mandates that detaining a suspected person may be done without a warrant of arrest. Law-enforcement agencies of military personnel will not incur "any criminal liability for delay in the delivery of detained persons to the to the proper judicial authority," states Senate Bill Number 1083.

In response, Tito Sotto, the senate president, said that the bill has enough measures to safeguard against potential abuse and even referred to critics as "epal." Section 4 of the bill delineates that acts of terrorism "shall not include advocacy, protest, dissent, stoppage of work, industrial or mass action, and other similar exercises of civil and political rights, which are not intended to cause death or serious physical harm to a person, to endanger a person’s life, or to create a serious risk to public safety." Despite this, some lawyers have pointed out that the intent will be difficult to verify and could thus lead to a "chilling effect."

Unsurprisingly, people online have become divided by the topic. Several hashtags calling for the government to junk the bill in entirety rose to the top of the Twitter trends on June 3, with many celebrities and famous names leading the call. We round up some of the most fiery tweets and posts:

Anne Curtis-Smith included a link to the Congress' version of the bill. Which you can read. Right now.

A simple link to the petition says a lot.

Wurtzbach first Tweeted that she was afraid to speak out—but realized she needed to.

Never underestimate the strength of a fandom.

Soberano was one of the first to use their platform against the bill.

We appreciate the subtle plug.

The Queen shared the call on pretty much all her platforms.

Adventurer Savvy Seasoned Tweets Trending Government Celebs Celeb Ig
Your Guide to Thriving in This Strange New World
Staying
In? What to watch, what to eat, and where to shop from home
OR
Heading
Out? What you need to know to stay safe when heading out