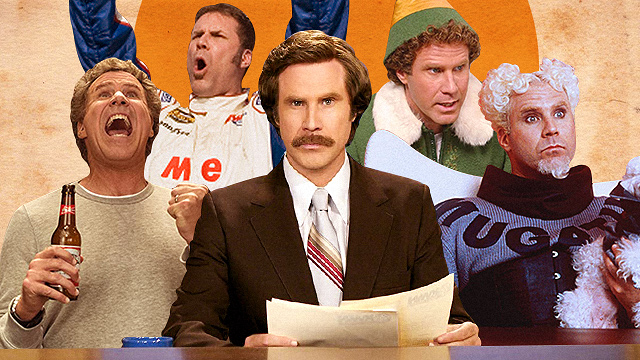 The Will Ferrell Characters Most Likely to Win a Cage Fight

(SPOT.ph) There are actors who slide into different characters seamlessly, leaving you guessing as to their true identity with every role. Think Gary Oldman, Amy Adams, Christian Bale, and more—then there are actors like Will Ferrell. No matter what movie he’s in, he almost always gets typecast as the loud, ridiculous, bumbling character that slides in all the laughs. We’re not saying that’s a bad thing, of course: We thank the guy for all the crazy people he’s graced the silver screen as. Still, it does have us wondering. With all the characters and skits the Saturday Night Live comedian has come up with over the years, which one would win a cage fight? Yup, we’re going there.

For this list, we rank some of Ferrell’s most memorable movie characters based on how well they’d survive a cage fight with each other. We left out Ferrell’s animated characters from the list (Megamind is sure to have one heck of an advantage over mere mortals, and so would Lord Business) and concentrated on the popular humans. And oh, beware of spoilers!

We rank which popular Will Ferrell movie character would reign supreme in a cage fight:

We’re sorry, but we need to say it: Being a goody two-shoes isn’t going to get you anywhere in a cage fight. While the other daddy in this story—as in Dusty (Mark Wahlberg)—definitely has a chance, the principled Brad might choose to take the high road and sit this one out. Or maybe even deescalate the situation into a dance bottle like they did in the movie (TBH, we want to see that, too). Hey, maybe he’ll even stick around and shout meaningful life advice at the other Ferrells while they battle it out.

What the “Love Me Sexy” singer may be missing in terms of fighting capabilities, he definitely makes up for with vocal prowess—and some basketball talent, kind of. Jackie Moon is sure to up the cage fight game with an alley-oop somehow; Maybe he could jump high enough to evade the other characters. Better yet, maybe he could come in there with the entire Flint Michigan Tropics (No offense though, that might not make much of a difference). Still, you can’t win a cage fight with a free throw.

8. Lars from Eurovision Song Contest: The Story of Fire Saga (2020)

Judging from his weak attempt at a fistfight with the Lion Lover, Alexander Lemtov (Dan Stevens), we don’t think Lars from the Eurovision film would survive for very long in a cage fight with the other Ferrell characters. He could always strike up a chorus of “Ja Ja Ding Dong” to distract his enemies, but that can only work for so long. His only weapon here would be the Elves, but we don’t think they’d be willing to leave their lovely home in Húsavík just to watch the Ferrell characters beat each other up (Their loss, really).

Brennan isn’t exactly strong, but boy is he tenacious. We’re sure with a little egging on from his step-bro Dale (John C. Reilly), Brennan could tap into Incredibly-Annoyed-Sibling mode—and we all know how dangerous an irate sibling can be (sorry, only children!). If all else fails, he could launch into song! With his voice and another Italian ballad—might we suggest “The Prayer,” another Andrea Bocelli hit, instead of “"Por Ti Volaré" this time around—he’ll have the entire crew in tears in no time.

Secret weapon: Will place all the others on Santa’s naughty list

We know what you’re thinking: “There’s no way Santa’s own elf would be involved in a cage fight.” But trust us, as we all know, Buddy ain’t your ordinary elf. The human-slash-Christmas fantasy hybrid grew up in the North Pole and then moved to the cutthroat New York City like it was no biggie—we’re sure he has some tricks up his sleeves we didn’t see in the movie. Besides, we’re sure none of the other characters want to be placed on Santa’s naughty list, so they’re sure to play fair with Buddy around.

Secret weapon: An axe that he isn’t quite sure how to use

Nothing will get in the way of a parent securing their child’s future—even a stinkin’ cage fight. Sure he’s a middle-aged suburban father, but we think that if we dangle just the right carrot on a stick, Scott is sure to have a fighting chance. Plus, in case you don’t remember, the man’s pretty eager to use an axe. And the fact that he doesn’t know how just adds to the danger.

Secret weapon: Will stab himself to scare you off

Good ol’ Ricky Bobby knows how to be intense. If you think the guy who stabbed his own leg with a knife to prove a point—which turns out was wrong, by the way—isn’t going to be pretty deadly in a cage fight, then we beg to differ. A cage fight is different from a race that’s for sure, but any guy that defeats the crazy and unpredictable Jean Girard (Sacha Baron Cohen)—especially after having his arm broken by him—definitely gets some fighting cred in our eyes.

How many times does he have to say it? “Gator don’t play no shit.” Truth be told, we’re not so sure the desk-loving Allen would survive a cage fight, but once he unleashes his dark side, Gator, then all hell will break loose. The former college pimp—don’t tell Allen we said that—is sure to bring something to the cage fight. He may not win it, but damn, would it be entertaining to see the full potential of Gator.

2. Mugatu from the Zoolander movies

We all know Ferrell’s most fashionable, poofy-haired villain knows how to fight—and with a shuriken no less. Mugatu is bound to dominate a cage fight with all other Ferrell characters. We can already imagine him trying to create some sort of minion-slash-groupie band out of this cage fight, using his usual conniving and no-good tricks. He’s smart, he’s violent, and damn, is he good-looking (fight us). Mugatu would have come out of this fight triumphant—and spotless—if only the ultimate Ferrell character didn’t come into play. Speaking of which…

1. Ron Burgundy from the Anchorman series

Ron Burgundy. The supremely narcissistic and totally oblivious anchorman is hands-down the supreme winner of this cage fight. What he lacks in brain cells, he definitely makes up for with sheer will and belief that he is the supreme winner—and a smidgen of luck, too. For some weird reason, things always work out the way this ridiculous, misogynistic, and obnoxious, yet somehow extremely entertaining parody of a '70s “gentleman” wants them to. TBH, we aren't complaining.