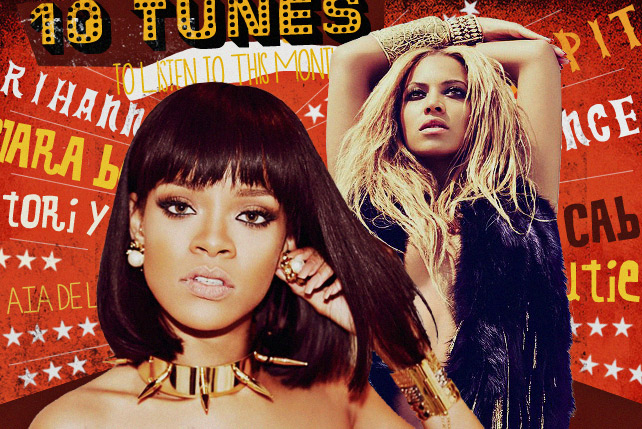 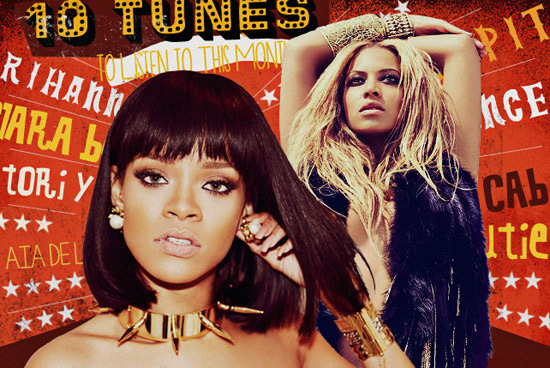 Song: "Bitch Better Have My Money"

RiRi recently dropped a trap track fiercely titled "Bitch Better Have My Money." The single isn't like her past dance-pop releases, but it packs a lot of feisty lyrics, plus beats made for grinding. If RiRi's planning to take on a different direction, then this is proof that she definitely can.

Fun fact: Another track that will reportedly be featured in Rihanna's eighth studio is "American Oxygen," which debuted on Tidal earlier this month.

Those familiar vocals we love from years ago and those hugot lyrics—how can you not love this new Aia de Leon track? What we find more compelling than the music are the words. The confessional lyrics speak our fears in love for us.

Song: "Die With You"

The queen released a stripped down, heartfelt love song last April 4 in celebration of her and husband Jay Z's seventh wedding anniversary. In the video (which has been taken down from You Tube since), she can be seen playing the piano, dressed down and barefaced but still looking and sounding fabulous.

Fun fact: The video was posted on Tidal, a music streaming service that was recently purchased by a company headed by rapper Jay Z.

Clara Benin is no doubt an act to watch for. We particularly love this debut single from her new album, Human Eyes. The simple arrangement turns the spotlight on the young musician's soulful vocals and commendable songwriting.

Fun fact: Clara Benin teamed up with The Coffee Bean and Tea Leaf for a series of coffee shop gigs to launch and promote her album.

Chazwick Bundick just released his fourth studio album under his famous moniker Toro Y Moi titled What For? In it is the lead single "Empty Nesters," which features more funk and old school garage punk. It's a summer jam you need to listen to, stat.

Song: "The Fury and Sound"

BP Valenzuela, the girl everyone is raving about in the local music scene, teamed up with her buddy Nick Lazaro (Moonwlk and Twin Lobster) to come up with "The Fury and Sound," a song off BP's recently released album, The Neon Hour. The two are obviously a good combo, with BP's honest songwriting and fresh chops, and Lazaro's mixing and additional vocals.

Fun fact: Aside from making music, BP also creates drinks as a barista at Satchmi in SM Megamall.

Passion Pit keeps on teasing us, and we can't wait for the release of Kindred, the band's third studio album, on April 21. The single, with its indietronica sound and Michael Angelakos' distinct vocals, is the perfect escape track this summer.

Fun fact: Passion Pit was formed in 2007 and hails from Cambridge, Massachusetts.

The song and the music video are a delight to the senses. It takes you back to the '60s—both in sound and visuals. You can thank The Strange Creatures for this easy breezy, dreamy indie jam you can blast on your next road trip.

Fun fact: The Strange Creatures is one of the two winning bands in the Wanderband 2015 contest.

Song: "You've Haunted Me All My Life"

Count on Death Cab for Cutie to give you all the feels. "You've Haunted Me All My Life," off the band's latest album titled Kintsugi, is a quieter and more brooding breakup track that’s simple yet spot-on.

Fun fact: The American alternative rock band was founded in 1997 in Bellingham, Washington.

A Problem Like Maria collaborated with Berlin-based producer Mattir to release "Sea & Saltwater," a mix of indie-pop vocals with eccentric and unpredictable electronic beats. We love the contrast of control and revelry in this track.