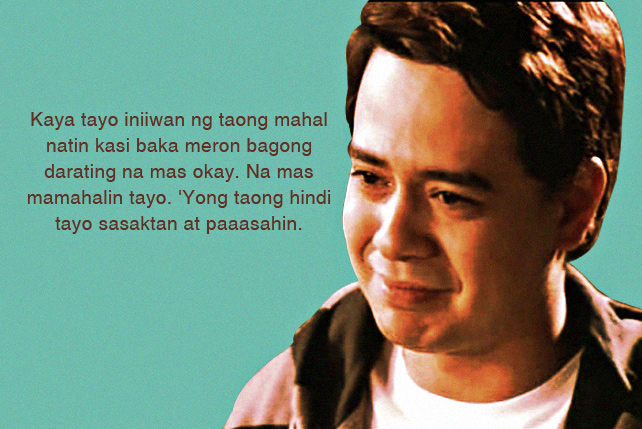 10 Tearjerking Quotes About Moving On From Pinoy Movies 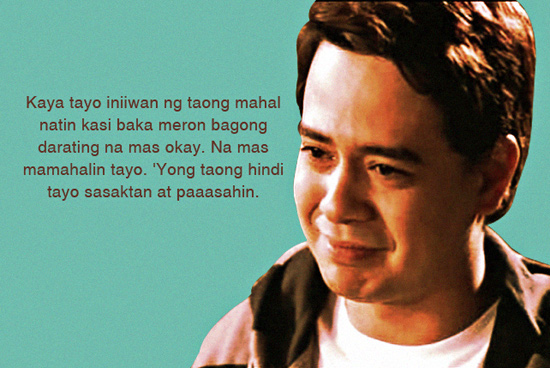 (SPOT.ph) The hardest part of the end of any relationship is, without a doubt, trying to move on. Some people eat their feelings, others find a rebound relationship. Then there are some people who find comfort in a movie marathon. Whether it's a bad breakup or a what-could-have-been scenario, there's a Pinoy movie quote that speaks to your soul. We round up 10 of the best, most relatable ones.

The plot: Agnes (Lea Salonga) moves to the U.S. to be with her mother, forcing her to maintain a long-distance relationship with Jerry (Aga Muhlach). They eventually lose touch and years later, meet each other again.

The plot: Apollo (John Lloyd Cruz) and Irene (Toni Gonzaga) were set to be married, but it all ended when the former gets cold feet and leaves her at the altar. Three years later, their paths cross again but there's just one problem—Irene seems to have no recollection of what happened.

"I can never un-love you, I just love you in a different way now."

The plot: Everything seemed to be going so well for Ginny (Toni Gonzaga) and Marco (Piolo Pascual), until the former abruptly flies off to Barcelona. Years later, Ginny returns to the Philippines with the hope of rekindling their romance, but Marco has moved on with someone new.

The plot: Despite hailing from different worlds, Steph (Sarah Geronimo) and Anthony (Coco Martin) fall in love for one summer. Things end sourly when Anthony leaves without a goodbye or explanation. Seven years later, they meet again. Anthony is in a new relationship and to make matters worse, his girlfriend is Steph's boss.

The plot: Everyone thought Popoy (John Lloyd Cruz) and Basha (Bea Alonzo) would last forever, even them. Basha abruptly breaks up with him after growing weary of him and their relationship. Eventually, they both move on (with difficulty). Years later, they reunite for a job and things...well, they get very complicated.

"Are you going to focus on what went wrong, or will you look instead at the things that’s going right in your life?"

The plot: Julian (Derek Ramsay) flies to Manila with one mission: to perfectly recite the Filipino translation of his angry letter to an ex-girlfriend. He enlists the help of Filipino-English tutor, Tere (Jennylyn Mercado), who is dealing with relationship problems of her own.

The plot: Georgina (Toni Gonzaga) is an uppity marketing head who temporarily takes over as the boss of the department. Coco Martin plays Pong, her lowly but cheerful assistant. To impress a Japanese client, the two must switch roles.

The plot: The film is the third installment in the Miggy (John Lloyd Cruz) and Laida (Sarah Geronimo) saga. The two are no longer together and have gone their separate ways. As you can probably already guess by now, they reunite years later and it turns out, they still have feelings for each other.

The plot: A man (JM de Guzman) comes to the aid of a woman (Angelica Panganiban) struggling with her baggage at the airport. They form a friendship and decide to go on a road trip together.

The plot: Trixie (Sarah Geronimo) is a law student and aspiring singer who joins the band of Gino (Piolo Pascual). Things get complicated when they fall for each other.

Quotes Moving On Pinoy Movies
Your Guide to Thriving in This Strange New World
Staying
In? What to watch, what to eat, and where to shop from home
OR
Heading
Out? What you need to know to stay safe when heading out