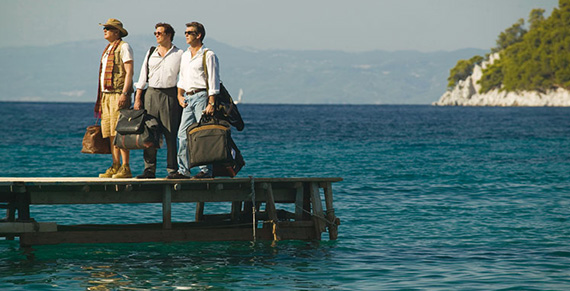 These films will make you want to travel

Movie destinations to add to your wishlist

Movies can transport you to new worlds, new realms, and even new realities. Most of the time they present an escape from real life, but they can also inspire us to do things we don't normally do, especially traveling. Here are 10 movies you can watch that will no doubt inspire you to travel.

Music, love, and Greece. Need we say more? Mamma Mia is about a woman named Sophie who is about to get married to the man of her dreams. The one thing missing from her life is her father. Her mother doesn't want to tell her who her father is, but Sophie discovers her mother’s diary with three potential dad candidates, all of whom she invites to Greece, the venue for her wedding. As you watch the movie, you’ll laugh, you’ll cry, and maybe you’ll even sing along, but most importantly, you’ll want to go to Greece.

Based on the true story of very influential women, Julie & Julia is about two ladies and their journey to achieving something on their own. Julia Child’s husband, Paul, who does government work for the U.S., is assigned to Paris. While they're there, Julia attends cooking school at the prestigious Le Cordon Bleu and eventually faces struggles getting her cookbook published. Meanwhile, Julie Powell, a once up-and-coming writer, finds herself stuck in a rut as she sees her friends becoming successful in their respective fields. In her need to achieve something she can call her own, she starts a blog detailing her journey to cook all recipes in Julia Child’s cookbook, Mastering the Art of French Cooking. You’ll surely drool with all the food choices and also fall in love with Paris.

Across the Universe presents a great love story about two people finding each other in the most unlikely of circumstances. Set in the late '60s with the Vietnam War as the backdrop, this story is about Lucy, a lost soul trying to find herself, and Jude, an artist who drops everything in London to find his father. Packed with twist and turns—not to mention 34 songs of The Beatles—Across the Universe will make you fall in love with love, the music of The Beatles, and way-back-when New York.

A classic case of mistaken identity, Monte Carlo tells the story of three friends, Grace, Meg, and Emma, who go to Paris on vacation after graduation. After a troubling day, they find themselves in a posh hotel where Grace is mistaken for a British heiress. The three girls are then thrust into the action and find themselves in Monte Carlo, Monaco, living the lavish life. Paris is, of course, a staple on any traveler's list, and if you have not heard about Monaco prior to watching this film, it will surely make your bucket list right after.

Lost in Translation is about two unlikely people who form a bond after brief encounters in Japan. Bob is an aging movie star set to film a commercial in Japan. Charlotte finds herself alone in Japan with her photographer husband who seems to be more interested in young stars than he is with his wife. Both Bob and Charlotte have rocky marriages, and after a few encounters in the hotel they both stay at, they start to form a bond and begin to hang around Tokyo to discover the differences between American and Japanese culture as well as the differences between their generations. Japan will certainly be the next place you visit after seeing the characters explore the bright and vibrant city of Tokyo.

Read the full article, "10 Movies That Will Inspire You to Travel," on TravelBook.ph

Travel Book Movies Travelbook Travelbook
Your Guide to Thriving in This Strange New World
Staying
In? What to watch, what to eat, and where to shop from home
OR
Heading
Out? What you need to know to stay safe when heading out