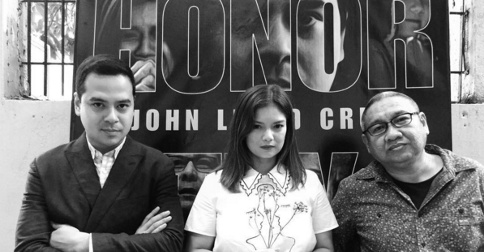 Moira Lang shares details of what happened during the hearing.

(SPOT.ph) Moira Lang, producer of Norte, Hangganan ng Kasaysayan, who was present at the MMFF hearings before the Congress and tweeted in detail what happened, posted on January 14 a statement on her Facebook page sharing events that transpired during one of the Congressional hearings on the Metro Manila Film Festival's disqualification of Honor Thy Father. The post implies that the festival might soon be abolished to make way for a different festival, and that people who were present at the hearing stood up to cheer upon hearing the suggestion.

Here's what she said:

"Yesterday something momentous happened in the Congressional hearing on the MMFF. Beyond and more important than the issues raised about MMFF 2015, shocking discoveries were made about the MMFF organization and consequent, unanimous, and urgent recommendations and resolutions were made by the solons who attended the hearing. To wit:

1. The MMFF believes itself to be a private entity exempt from audit by government or any institution or body for that matter. Under such conviction of immunity, it has: a) committed acts constituting conflict of interest and grave abuse of power; b) operated--such as in selecting the annual festival entries, tabulating the MMFF Awards jury members' scores, and coordinating with theater operators and bookers in deciding the fates of the entries' life in the cinemas--with little or no regard for transparency or fair play; and c) conducted its financial dealings in a questionable, irresponsible, and less than scrupulous manner.

2. Upon ascertaining the above, the Congressional Committee that presided over the hearing unanimously passed the motion to create a technical working group that will study, revise, overhaul, and reconstitute the existing organization and by-laws of the MMFF. In other words, there is now a move in the House of Representatives to ABOLISH THE MMFF IN ITS PRESENT STATE AND GIVE BIRTH TO A NEW, IMPROVED, LAW-ABIDING FESTIVAL FOR THE FILIPINO PEOPLE.

The implications of the proceedings dawned on everyone attending the hearing and the room erupted in applause despite the sergeant-at-arms' repeated warnings to everyone not to engage in any disruptive or audible display of emotion.

None of this made it to print (broadsheet dailies) or TV news yet. Maybe the mainstream media deem it inconsequential, a little too showbiz perhaps. Or the enemies of Philippine Cinema are more shrewd and powerful than we think. Or no one really cares outside the movie industry. Or maybe, hopefully, it's just a case of delayed reaction that will be rectified in the coming days. Whatever the reason, I am sharing this as a record of what happened yesterday and in the hope that some of you will share it with your friends."

Mmff Mmff2015 Moira Lang
Your Guide to Thriving in This Strange New World
Staying
In? What to watch, what to eat, and where to shop from home
OR
Heading
Out? What you need to know to stay safe when heading out