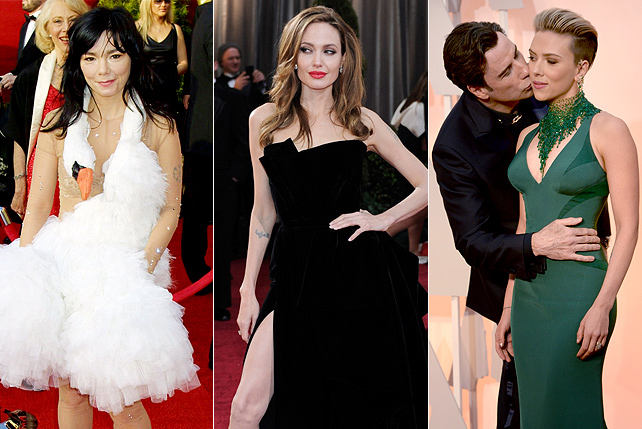 10 Most Memorable Red Carpet Moments From the Oscars

The funniest, weirdest, and most awkward moments from Hollywood's biggest red carpet

(SPOT.ph) Red carpets are usually about celebrity interviews, posing for the cameras, and donning glamorous, designer gowns. That's not always the case, though. More often than not, we also get a good dose of fashion faux pas, funny blunders, and strange, cringe-worthy moments. Since the Academy Awards are just around the corner, we decided to look back at 10 of the most memorable moments from the Oscars' red carpet.

Dakota Johnson's fight with her mom

We've all had our fair share of misunderstandings with mom, but at least we didn't have to deal with a live audience when it was happening. For mother-daughter duo Melanie Griffith and Dakota Johnson, theirs took place on the 2015 Oscars red carpet. When ABC's Lara Spencer asks Melanie if she has seen Fifty Shades of Grey, the latter says no. Dakota's annoyance quickly escalates to exasperation until she finally snaps at her mother. Awkward.

Angelina J0lie caused quite the Internet stir when she walked the red carpet in 2012. The actress, who was wearing a black dress with a thigh-high slit, decided to show off her assets in well, the most awkward or amusing way possible. (You decide.) The photos quickly became a meme, generated hashtags like #angellegging and #Jolieing, and even led to its own Twitter parody account.

Just when you thought nothing could top John Travolta mispronouncing Idina Menzel's name during the 2014 Oscars, along comes his awkward red carpet moment with Scarlett Johansson a year later. The Internet collectively cringed when he kissed her cheek while they posed for the cameras. In a statement, the actress said the kiss was "very sweet and totally welcome," and added that there was "nothing strange, creepy or inappropriate" about him.

Even after 15 years, Björk's swan gown by Marjan Pejoski remains one of the most infamous and memorable dresses we've seen on the Oscars red carpet. The Icelandic singer's outfit was parodied many, many times over the years, such as Ellen DeGeneres wearing a version during the Primetime Emmy Awards in 2001 and our personal favorite—the fashion show in the 2004 movie, White Chicks.

Jennifer Lawrence has fallen in public so many times, we've almost come to expect it at every event. (For instance, she fell onstage in 2013 while accepting her Best Actress statue. In 2015, she tripped while going up the stairs during the Madrid premiere of Mockingjay Part 2.) In 2014, she took a tumble over a traffic cone just after she stepped out of her limo. The result? She ended up dragging down the person in front of her.

Comedian Sacha Baron Cohen made headlines in 2012 when he involved Ryan Seacrest in an uncomfortable prank caught on-air. The actor showed up as his character from the movie The Dictator while toting an urn he claimed contained the ashes of the late North Korean dictator, Kim Jong-il. He then pretended to fumble with the urn and spilled the "ashes" all over the E! host. The prank was met with mixed reactions and Seacrest later admitted he wasn't in on the joke. Cohen reportedly apologized to him a few months later.

E! gets the wrong black woman

On-air mistakes don't just happen to celebrities. Take the 2013 Oscars for instance, when E! News was airing its annual Live From the Red Carpet show. The TV channel was showing celebrities walk down the carpet, and mis-identified The Help actress Octavia Spencer as her co-star, Viola Davis. (For the record, they look nothing alike. At all.) By the time Spencer made her way to Ryan Seacrest for an interview, he made sure to pointedly address her as "Octavia" several times. The flub quickly trended online, with many users generating memes and hashtags, as well as calling the mistake "racist."

?? this movement #AskHerMore..have you heard of it? It's meant to inspire reporters to ask creative questions on the red carpet. I love the Oscars AND fashion like many of you - & am excited to share #WhoAmIWearing later tonight. (????not yet!!) But I'd also love to answer some of these Qs....And hear your suggestions?! (Share em below!) There are so many amazing, talented nominees this year..! Let's hear their stories! Spread the word. #AskHerMore #Oscars #Countdown

It's bound to be frustrating for female celebrities when they are constantly asked about what dress they're wearing and rarely about their work. In 2015, actress Reese Witherspoon used the hashtag #AskHerMore to campaign for more interesting dialogue on the red carpet. The move doesn't come quite as a surprise, with more and more actresses objecting to questions about their choice of dress. In the 2014 SAG Awards, Cate Blanchett famously called out E!'s Glam Cam for scanning her up and down, saying, "Do you do that to the guys?"

It was in 2000 when Angelina Jolie bagged an Oscar for Best Supporting Actress but it was a moment during the event's red carpet that stole the show. She shared a controversial kiss on the lips with her brother, James Haven, and later, fanned the flames during her acceptance speech when she said, "I'm so in love with my brother right now."

Everyone loves a funny photobombing moment and the Oscars red carpet is easily the best place to give it a go. During the 2014 Academy Awards, U2 was lined up outside the Dolby Theater when Benedict Cumberbatch leapt up out of nowhere from behind. Fun fact: He pulled off the same stunt a year later by leaping up from behind Meryl Streep during the Golden Globes.