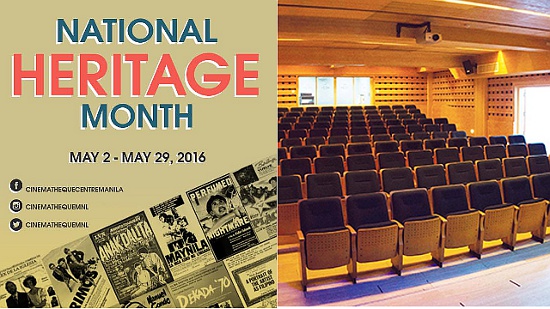 Yes, this is happening all month!

(SPOT.ph) In case you didn't know, May is National Heritage Month and the Cinematheque Centre Manila is celebrating with a roster of classic Filipino films you can watch this month. Some of the films are from the country's National Artists for Film, including Lino Brocka, Eddie Romero, and Ishmael Bernal. Here are five films you can catch for free:

The restored version of Lino Brocka's revered social realist film follows the journey of an innocent young fisherman to Manila in search for love. He arrives in a city that has been broken by the tyranny of dictatorship.

This timeless classic follows a young soldier returning home from abroad to discover his mother living in poverty after World War II. Now, he must make amends with his new realities at home.

Starring Hilda Koronel, Gina Pareño, Rio Locsin, and Chanda Romero, this movie depicts a group of young upcoming business women who use their wit and cunning to achieve their goals. Of course, they also get into several misadventures along the way.

This film retells the biblical story of the two brothers but set in modern Filipino society, thus delving into how a corrupt system of justice creates barriers and leads to bloodshed.

FPJ rose to fame in the '80s thanks to this Eddie Romero film where he plays a missing father whose violence-marred life parallels the history of the Philippines across eight decades.

All films are for free admission with tickets on a first-come, first-serve basis (released an hour before screening time). For the complete list of films and more information, visit Cinematheque Centre Manila's Facebook page.

Cinematheque Manila National Heritage Month
Your Guide to Thriving in This Strange New World
Staying
In? What to watch, what to eat, and where to shop from home
OR
Heading
Out? What you need to know to stay safe when heading out