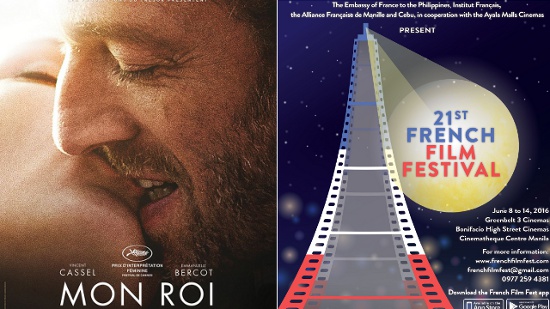 The SPOT.ph Guide to the 21st French Film Festival

Gear up for 17 French films in one week!

(SPOT.ph) Movie fans, it's time to clear your calendars because the annual French Film Festival is finally here! Free your schedule from June 8 to 14, and gear up for a roster of 17 French films that will be screened in two venues: Greenbelt 3 Cinemas and Bonifacio High Street Cinemas.

Here is the complete list of French films that you can catch at this year's festival.

Ticket prices for both cinemas are priced at P100 and may be purchased at the cinema lobby or online via SureSeats. Screening schedule is subject to change; for the latest schedule, visit the French Film Festival's website.

A woman is admitted to a rehabilitation center after a skiing accident, and in the haze of questions and painkillers, she suddenly remembers her tumultuous love story. The film was nominated for a Palme d'Or at the 2015 Cannes Film Festival, where it also won a Best Actress award for Emmanuelle Bercot.

An unskilled young man lands a job as a sub-contractor in a nuclear power plant where he discovers that radiation contamination is an everyday hazard. At the same time, he falls in love and begins an illicit affair with his friend's fiancée.

It's 1971, and two women named Carole and Delphine meet and fall in love. When Carole follows Delphine back to her hometown, the two realize that their newfound relationship may not be so easily accepted in the countryside.

At an airport hotel located in the outskirts of Paris, a Silicon Valley engineer abruptly quits his job, leaves his wife, and holes himself up in his hotel room. He soon meets a mysterious hotel maid who will change his life.

A young man paying the rent for himself and his life-long friends must resort to selling marijuana in order to pay the bills. Soon, he and his friends are caught in the dangerous, underground world of drugs.

François Sim's self-worth plunges after his wife leaves him and he loses his job. When he unexpectedly receives a job offer that will take him around France, he uses the time to reconnect with his first love and rediscover his relationship with himself and his estranged daughter.

A French financier living in Shanghai returns to Paris for a short trip. When he learns that trouble is brewing in his childhood home, he decides to return to his small town to straighten things out. It turns out that his homecoming will be more eventful than he realizes.

This French comedy revolves around a 23-year-old aspiring writer who discovers the story of a lifetime when his grandmother runs away from a retirement home. He follows her to Normandy, where he learns about her colorful childhood in a small town.

Brigitte and Xavier are polar opposites: the former is a dreamer, while the latter's main focus is his work. Now that their children have left home, the couple's routine farm life increasingly weighs Brigitte down. One day, in a moment's madness, she leaves the fields behind and heads for Paris. Xavier, realizing that he may lose her, decides to follow her and regain her affections.

In the depths of legendary Brittany, Aliénor de Canterville's ghost is condemned to haunt her family's castle and to scare away any new inhabitants. But when a new family fleeing from Parisian life buys the castle, Aliénor realizes that she can't seem to frighten this family away. Only a 15-year-old member of the family can free her from the curse.

On Christmas Eve, Sam and his best buddy Khalid dress up as Santa to steal as much as they can from a department store. When Sam gets cornered by some children and has to tell them a story, the story of Aladdin–or his wacky, made-up version, at least.

Angélique is 60 years old yet she still actively lives a partying lifestyle. To earn a living, she convinces men to drink in a nightclub on the German border, but as time passes, her clients have become few and far in between. But Michel, a long-time client, is still in love with her and one day, asks her to marry him.

Jérémie wakes up in an apartment he doesn't recognize and next to a woman he doesn’t know. She is Adna, a stunning Swedish woman. The only problem is, Jérémie is about to get married—to a man.

Mathieu has always aspired to be a famous author, but despite all his efforts, he has never managed to be published. His destiny takes a new turn the day he stumbles across the manuscript of an elderly and solitary man who has recently died. When he steals the text as his own, he becomes the bright new star of French literature. Everyone is now eagerly anticipating his second novel, and as each day passes and pressure mounts, Mathieu plunges ever deeper into a criminal spiral of lies in order to keep his dark secret hidden.

When a famous French composer flies to India to write the score for the Indian version of Romeo and Juliet, he meets the wife of the French ambassador and embarks on a complicated relationship with her.

Human is a 2015 documentary by French environmentalist Yann Arthus-Bertrand, which is almost entirely composed of exclusive aerial footage and first-person stories told into the camera. It's essentially a collection of stories on what it means to be a human.

This French drama-slash-comedy  depicts what happens when a picture-perfect family is hit with long-term unemployment and possible eviction, then turns to a life of crime in order to pay the bills.

Movie Screening French Film Festival
Your Guide to Thriving in This Strange New World
Staying
In? What to watch, what to eat, and where to shop from home
OR
Heading
Out? What you need to know to stay safe when heading out