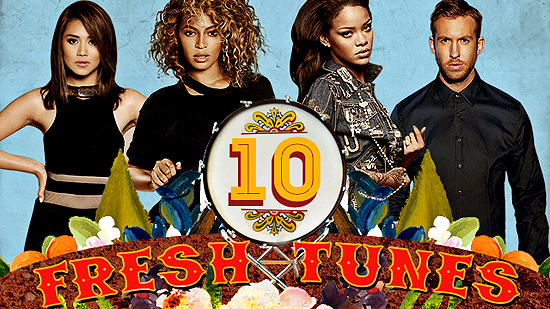 (SPOT.ph) Another month, another list of tunes you need to hear right now. Rihanna is on a roll these days with several new singles out, including her contribution to the Star Trek soundtrack and her collaboration with Scottish DJ Calvin Harris. Beyoncé just released a new music video, Louis The Child and Icona Pop have teamed up for an electropop treat, and Birdy nails a heartfelt ballad. Also have a listen to the freshest from Sarah Geronimo, Cheats, June Marieezy with FKJ, Musical O, and Alessandra De Rossi with Marc Abaya.

Rihanna stars in the otherworldly music video for "Sledgehammer." It's a haunting ballad that showcases the vocal capabilities of the R&B-pop singer. At this point, we can't quite make out how the track fits in with Star Trek.

Fun fact: "Sledgehammer," written by Sia, is from the Star Trek Beyond soundtrack.

Known to always give audiences a good show, Sarah G. again wows everyone with her music video for "Tala." In it, she sings and dances to the upbeat Tagalog love song. She slays and proves that OPM is cool and definitely not dead.

"Sorry" is nothing short of unapologetic. Queen Bey's mid-tempo single off her visual album, Lemonade, now has a standalone music video featuring a dancing Serena Williams. The visual starts with Bey delivering a spoken word poem and later on references the now infamous "Becky with the good hair."

"Drunk" is a mellower-than-usual tune from the high-energy band Cheats. The single sounds more like a summer theme song with its groovy guitars, saccharine sweet female vocals, and overall blissful vibe.

Swedish duo Icona Pop teamed up with Chicago-based duo Louis The Child for this electropop club banger that captures the beautiful mess that life sometimes turns into. The verses sound sassy and the chorus catchy, thanks to the combined vocals of the Icona Pop ladies.

Fun fact: Icona Pop are Aino Jawo and Caroline Hjelt, while Louis The Child are Freddy Kennett and Robby Hauldren.

The collaboration of FKJ and our very own June Marieezy is a heavenly piece of work that you can easily get lost in. Marieezy's smooth and sexy vocals were made for the live-looping skills and sophisticated musical sensibilities of French artist FKJ.

Song: "This Is What You Came For"

Rihanna has another entry this month, this time with Scottish DJ Calvin Harris. "This Is What You Came For" is a guilty-pleasure song; it's formulaic yet so infectious. The highlight perhaps is how nicely different Rihanna sounds in this tune.

This month, we're also featuring a heartfelt ballad by English musician Birdy. Clean vocals and the sentimental songwriting take the spotlight in "Words.” Just straightforward music; no need for any outrageous elements to wow the listener.

Actors and musicians Alessandra De Rossi and Marc Abaya get creative together for "Swept Away," a downtempo piece of ethereal electro goodness. The vocals are hushed and breathy, and the rhythms dark and sensual.

Fun fact: The music video for "Swept Away" was directed by actress Meryll Soriano.

Playlist 10 Fresh Tunes Music New Music
Your Guide to Thriving in This Strange New World
Staying
In? What to watch, what to eat, and where to shop from home
OR
Heading
Out? What you need to know to stay safe when heading out