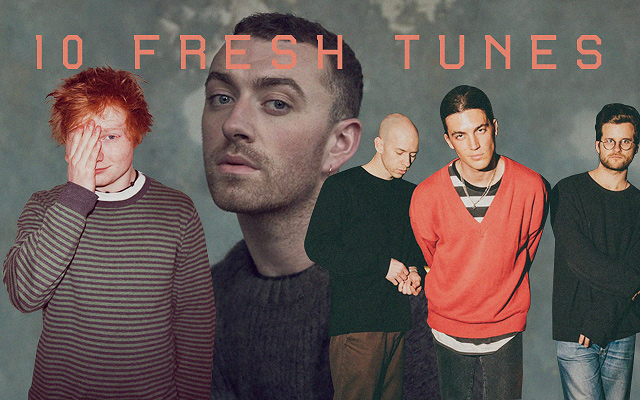 10 New Songs to Add to Your Playlist This October

Indulge in the freshest tunes from Sam Smith, Ed Sheeran, LANY, and more!

Song: "Too Good at Goodbyes"

English singer-songwriter Sam Smith is back with a poignant new ballad. "Too Good at Goodbyes" is the first single off Smith’s forthcoming sophomore album. He sounds as good as ever, proving no one can sing about heartbreak as well as he does. The track starts with delicate vocals accompanied by the piano and some light finger snaps, then explodes with even more emotions, thanks to the gospel choir.

Indie-rock act Cheats is on a roll. The band's latest offering is a one-take music video for "Beg," directed by Kyle Quismundo. The hypnotic guitars will first catch your attention, and the female harmonies will have you hooked. "Beg" even manages to add dreamy elements, despite its high energy.

Fun fact: Cheats is set to release their new album, Before the Babies, on October 28.

Everyone's favorite ginger is out with the lyric video for "Perfect," a love song that's set to be a big hit at weddings and dances worldwide. The single is complete with sappy lyrics, slow tempo, and Sheeran's soothing croons. The English singer-songwriter reportedly wrote "Perfect" in an attempt to beat "Thinking Out Loud" and to write the best love song of his career.

Fun fact: The song is believed to be about Sheeran's girlfriend Cherry Seaborn.

Song: "Turn Me Down"

"Turn Me Down," the first single off Jess Connelly's forthcoming mixtape, is a chill and hazy R&B ditty truly deserving of a spot in your playlist. Connelly is expected to release a couple more singles this year, and if this track is a preview of things to come, we're definitely keeping an eye out for what else this songstress' has in store.

Fun fact: The track was a collaborative project with producer Lustbass.

Don't let this song's catchy beats fool you. Here, vocalist Paul Klein sings of a vapid relationship, its emotional and lows, and not wanting any more of it. The track is powerfully subdued with its spot-on synths. LANY has been impressing music fans since the release of their self-titled debut album, and it's not hard to see why.

Post-rock band Fools and Foes recently shared their new single "Just You," a closer look at what they're working on for their forthcoming studio album. Frontwoman Isa Romualdez's vocals give more life to the drum- and guitar-driven track.

Fun fact: The band is aiming for an album release early in 2018.

The death of former Linkin Park vocalist Chester Bennington is still fresh in our memories. "One More Light," also the title of the band's latest studio album, is a touching song to remember Bennington by. The slow-tempo, emotional, and inspirational track has an accompanying music video showcasing footage from the band's tours and performances.

Fun fact: Mike Shinoda, in a hopeful message, said about the song: "’One More Light’ was written with the intention of sending love to those who lost someone."

Several lineup changes later and Rivermaya is still standing strong. One of the '90s most favorite rock bands is out with the second single from its 13th studio record, Sa Kabila ng Lahat. "8 to 5" merges the new and the old. Fans will be reminded of Rivermaya's signature sound but will also get something fresh out of the new tune.

Fergie is serving Britney, Kylie Minogue, and disco realness in "Tension," which is sure to be a club hit with its groovy beats. The track is not as high-energy as Fergie's other dance ditties, but it can make you move just as much.

Indie artist Keiko Necesario shows her growth as an artist and the changes she's been going through in her musical journey with her latest single. Coming from her acoustic and soulful roots, Necesario takes the leap and showcases a more electronically influenced sound with "Highway."

Fun fact: Necesario was among the 12 finalists of PhilPop 2016. Her song "Nobody But You" was interpreted by Monica Cuenco.