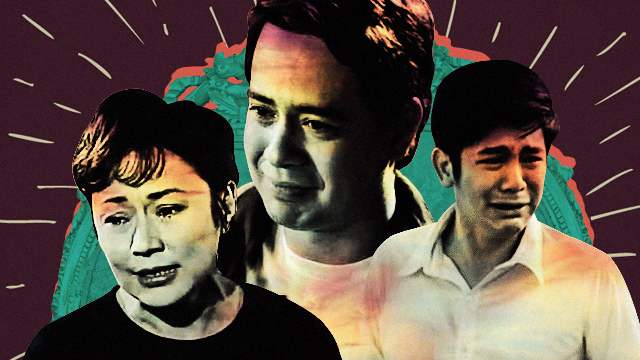 10 Pinoy Movies That Will Make You Ugly Cry

(SPOT.ph) There’s no doubt that Filipinos love a feel-good movie with a wide array of comedy and family-oriented movies coming out every year. We’re never going to get tired of laughing out loud and waiting for the happy ending that we know is going to happen. But we can’t help but still long for films that make the most out of their two-hour runtime by tugging at our heartstrings. So we’ve rounded up 10 movies that will have you feeling fragile after you watch them.

It might have spawned one of the most quotable memes on the Internet, but the intense 12-minutes (yes, we counted) confrontation scene is a definite tearjerker. Gabby (Shaina Magdayao) tells her three other sisters to come home as their youngest and only brother CJ (Enchong Dee) is getting married. Well-kept secrets and hard feelings are unearthed when Teddie (Toni Gonzaga), Bobbie (Bea Alonzo), and Alex (Angel Locsin) finally face each other and talk about the difficulties of being part of their family.

Thought you were already over your ex? Well, think again. Travel with Mace (Angelica Panganiban) as she heads to Sagada in attempt to finally find out the answer to the age-old question, “Where do broken hearts go?” She tags along with Anthony (JM de Guzman) and opens up about the struggle of her eight-year relationship coming to an end. You might just cry along with Mace as she screams her frustrations into the mountains.

Ginny (Toni Gonzaga) first fell in love with Marco (Piolo Pascual) when he was a teacher at her school. After years of having an intense crush on him, they eventually get into a relationship that then lasts for five years, only for her to break things off and suddenly move to a different country. When she comes back, they both realize they still haven’t gotten closure even if Marco is already in a relationship with someone else. You might just shed a tear or two when they both finally confront each other about wanting to start their relationship even if it’s already doomed to fail.

Reeling from a failed almost-marriage, Louie (Kristine Hermosa) goes on her already-paid-for honeymoon aboard a cruise. There, she meets the carefree Sam (Aga Muhlach) who is the complete opposite of her Type A personality. When the cruise ends and they go back to their usual lives, they realize that there might have been more to their relationship than just being frenemies.

Featuring an ensemble cast including Enrique Gil, Cristine Reyes, Dingdong Dantes, and Ronaldo Valdez, this film also sees the return of Aga Muhlach into the big screen after five years. Gil, Reyes, Dantes, and Muhlach play siblings who spend every Sunday with their father (played by Valdez) after finding out he only has seven weeks left to live. Things start to get real when old issues resurface and the family struggles to keep things together.

No list of tearjerking movies is complete without this classic. Josie (Vilma Santos) is a mother working abroad to provide for her children back home. But while she takes care of other people’s children, no one is looking after hers. She finally comes home but instead of her children hugging her, she is met with cold replies and blank stares. Try to contain your feels when the drama begins to unfold as she struggles to reconnect with her children.

If this movie doesn’t warm your heart when you watch it, then you probably don’t have any feelings. Magnifico (Jiro Manio) is a young boy who just wants the best for everyone. He lives with his sister who's suffering from cerebral palsy, his brother who lost a scholarship, his father who constantly berates him, his ailing grandmother, and his mother who’s trying to take care of everyone. His timid and quiet personality will get to when he starts trying to fix everyone’s problems without expecting anything in return.

Present-day Manuel (Eddie Garcia) is trying to look for someone named Corazon. When his sons find him in Ilocos, a flashback sequence begins and he tells them the story of how his younger self (Mark Herras) was friends with two women named Corazon. To save them the trouble, he called one Cora (Jennylyn Mercado) while the other was nicknamed Azon (Pauleen Luna). At one point, Cora gives him a locket and says that if the two parts reunite, they are meant to be together. Azon, on the other hand, gives him half of a photo and tells him the same thing. As Manuel nears the end of his life, he’s trying to piece things together to make one whole again.

It’s no surprise that writer-slash-director Antoinette Jadaone is an expert when it comes to making audiences cry. But the secret behind this movie is the impressive acting chops that Julia Barretto and Joshua Garcia display. Barretto plays Mika, who is hellbent on finding the “aliens” that took her mom away by finding her way to Mount Milagros in Batangas. She (literally) bumps into Garcia's character Caloy. He doesn’t keep it a secret that he’s fighting cancer, but he is evidently suffering from it and its repercussions on his financially-struggling family. The tears will just keep flowing as Caloy goes through multiple breakdowns—both physically and emotionally—and there’s almost nothing Mika can do to help.