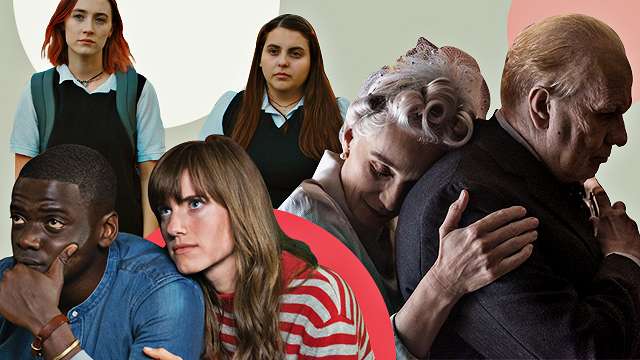 Here are all of this year's favorites.

(SPOT.ph) It's a refreshing change: The Oscar race this year isn't down to one film sweeping throughout the season, nor is it even down to two. Several films have taken frontrunner status, and it's still quite a close race as we head to the nominations on January 23, and to the ceremony itself on March 4. We list down some of the films that are in good shape to make a huge splash on nomination day, but it's far from a complete list.

Films like Michael Showalter's The Big Sick, Edgar Wright's Baby Driver, Dee Rees' Mudbound, Alexander Payne's Downsizing, Sean Baker's The Florida Project, Paul Thomas Anderson's Phantom Thread and Aaron Sorkin's Molly's Game look to score some of their own nominations, but for now, here are some of the favorites at the Oscars this year, and when you'll be able to catch them in Philippine cinemas.

Note: Release dates listed are for Philippine cinemas as they are currently known. Films with no known premiere or have already premiered do not have an indicated release date.

Jordan Peele's part-horror, part-comedy, part-social critique made the biggest splash early in the year as a winning genre film. With the Academy's aversion to genre films, specifically horror (with 2006's Black Swan being the last film in the horror genre to snag a Best Picture nomination, or even as far back as 1991's The Silence of the Lambs, depending on how deep your definition of “horror” goes), no one really expected Get Out to become one of the frontrunners of the Oscar race. Starring Daniel Kaluuya as a black man meeting the strange family of his white girlfriend, Get Out tackles race relations with clever twists blanketed under horror tropes, and it would make for an unconventional Best Picture winner.

In his first film based on true events, Christopher Nolan directed this cinematic masterpiece that became an early entry into the Oscar race. Dunkirk was exactly what you'd expect a war film by way of Chris Nolan to be, taking place over several interweaving timelines, and on sea, on ground, and in the air, during the awe-inspiring Dunkirk evacuation during World War II. Stunning and overwhelming, Nolan's latest is expertly crafted, so look for it to score a good amound of below-the-line nominations, even if its star-studded cast (including Tom Hardy, Kenneth Branagh, and Harry Styles) may go unnoticed.

All the Money in the World

A film that's been surrounded by controversy for the past few months, Ridley Scott's All the Money in the World about J. Paul Getty, is a major question mark in the Oscar race. After the Kevin Spacey scandal in late October 2017 forced Scott to do reshoots with Christopher Plummer replacing Spacey, Scott still managed to finish in time for its U.S. release date in December 2017. Soon after, news broke about Mark Wahlberg earning U.S. $1.5 million for the reshoots while Michelle Williams was only paid U.S. $1,000, launching a huge debate about the Hollywood pay gap between men and women. Are the film's behind-the-scenes stories (as nutty as the film's story) too messy and controversial for the Oscars? After snagging a surprise four nominations at the Golden Globes, it will be interesting to see how this film plays for the Academy.

Release date: January 31 (with sneak previews on January 22 and 23)

Gorgeous, sunlit Italy is the backdrop for this romantic and genuine tale of first love and first heartbreak. In Call Me By Your Name, teenager Elio (breakout star Timothée Chalamet) falls for a graduate student (Armie Hammer) staying in his family's house in Italy for the summer. What follows is a spiraling story of coming out, hiding from society, acting on lust, and feeling love that is beautifully written and beautifully acted. With Moonlight's Best Picture win last year, LGBTQ+ stories continue to be at the forefront of award contention.

It was January 1994, and figure skater Nancy Kerrigan was on the ground screaming and crying in pain after being attacked while she prepared for the world championships, causing injury to her right knee. Fingers were pointed at Kerrigan's rival, Tonya Harding, as the woman behind the attack. I, Tonya centers around this major moment in pop culture, but it also delves into Harding's background and story. Played with ferocity by Margot Robbie (a Best Actress frontrunner), Tonya Harding goes back under the spotlight, but it is Alison Janney, playing Harding's mother, who steals the show. I, Tonya is a wild film with even wilder characters looking to score high marks with the Academy.

The Best Actor race seems like it's a lock right now, with Gary Oldman most likely winning a golden statue (finally!) after a respected decades-long career. Portraying historical figure Winston Churchill with such intensity and power and under so much incredible make-up, Darkest Hour is a showcase for the veteran actor. The U.K. equivalent of the Academy, the British Academy of Film and Television Arts, handed Darkest Hour nine nominations, including Best Film, so it now falls on their American counterparts if they will reward the film with as much love.

After big wins at the Golden Globe Awards—including Best Picture, Best Actress (Frances McDormand), and Best Supporting Actor (Sam Rockwell), a great showing at British Academy of Film and Television Arts (BAFTA) with nine nominations, and more wins and nominations in other award-giving bodies, Three Billboards Outside Ebbing, Missouri might just be the film to beat as of right now. A ferocious film with unforgettable performances, Three Billboards is about a mother who rents three billboards in her town to call attention to the failed police investigation into the murder of her daughter. It's dark and angry, but speaks to the current climate where women are making a vocal stand against sexual abuse, and could very well make its way to the Best Picture Oscar in March.

When The Post was first announced, it seemed like Oscar: The Movie. Legendary director and Oscar winner Steven Spielberg tackles journalism in the 1970s, telling the story of the Pentagon Papers exposé—a very timely film in today's world of “fake news” and government vs. media—and stars legendary actors and multiple-time Oscar winners Tom Hanks and Meryl Streep. The Post is exactly what an Oscar film looked like in the past, but whether or not a film like this can make a splash in today's world is going to be its biggest challenge.

The Shape of Water

Winning the top prize at the recent Critics Choice Awards and topping the BAFTA nominations with an outstanding 12 nods, The Shape of Water continues to position itself as one of the favorites in the race this year. From the imaginative mind of Guillermo del Toro (Pan's Labyrinth, Pacific Rim), The Shape of Water is a fantastical love story about a mute woman and a creature (another “monster” of del Toro's creation) and the government looking to tear them apart. Looking to get nominations both above the line (for Picture, Director, and multiple cast-members like Sally Hawkins, Octavia Spancer, Richard Jenkins, Michael Shannon, and Michael Stuhlbarg) and for its beautiful production, The Shape of Water may be the film to beat come Oscar night.

There is a lot of uproar out there for the lack of support for female directors, but there has been a lot of buzz for actor-turned-director Greta Gerwig, and her debut solo feature, Lady Bird which, for a short while, held the title of best reviewed film on Rotten Tomatoes. This charming, witty, and very personal coming-of-age story about a high school senior (the incredible Saoirse Ronan) and her rocky relationship with her mother (Laurie Metcalf, also incredible) won the Golden Globe for Best Picture – Comedy or Musical and Best Actress – Comedy or Musical for Ronan, proving that it's not just a critical darling but an awards magnet as well. Gerwig looks to be only the fifth woman ever nominated for Best Director in its 90-year history.

All The Money In The World The Shape Of Water The Post Three Billboards Outside Ebbing Missouri Darkest Hour I Tonya Get Out Lady Bird Call Me By Your Name Dunkirk
Your Guide to Thriving in This Strange New World
Staying
In? What to watch, what to eat, and where to shop from home
OR
Heading
Out? What you need to know to stay safe when heading out