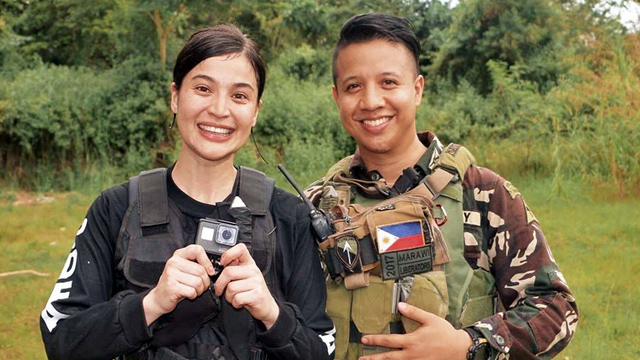 WATCH: This Marawi Soldier Made a Spine-Chilling Film With a GoPro Given to Him by Anne Curtis

They met while filming Buy Bust.

(SPOT.ph) Erik Matti’s action-packed Buy Bust has been making waves ever since it was rejected by the 2017 Metro Manila Film Festival. Trailers for the movie were then released online in December 2017 and Anne Curtis herself also posted a mini-teaser trailer for the film on her own Facebook page. On January 17, Curtis once again posted about the movie on her Facebook page, but this time it’s about first lieutenant Bala Tamayo of the Special Forces 134 Vishnu company, whom she met while shooting her action scenes.

In her post, she shares that while training and filming for the movie, she and the crew became friends with the soldier and eventually found out that the troop they were working with were going to be assigned in Marawi. She reveals, “We somewhat kept in touch—which was great because we knew exactly what the soldiers needed during such a harsh time and sent over care packages to somehow boost their morale.”

One of the items in her care package was a GoPro camera , because she found out that Tamayo has a passion for filmmaking and has actually made a few short films for the Special Forces. Curtis says, “His request to tell the story and experience the Marawi Siege from the boots of a soldier could not be left ungranted.”

He replied to her gift with a promise, saying, “I’ll return it if I survive this war. If I fall, my buddy will return it. That I promise.” And Curtis said, “I knew he would not fall and he would personally return the GoPro once the war is over...and IT IS OVER.” Anne then posted the YouTube link to the eight-minute film.

The film gives a quick background about the war in Marawi and how it spread from the ISIS war in Syria to the shores of the Philippines. It then features shots of Marawi itself, with the soldiers putting on their uniforms and performing their duty. You’ll see tension-filled meetings, empty streets, exploding buildings, and gunfights from the point-of-view of a soldier on the field. The voiceover also explains the scenes you’ll come across, like hostages being used as human shields and civilians being rescued. It doesn't get any more real than the haunting shots and hair-raising scenes of the short film.

Buy Bust Marawi Anne Curtis
Your Guide to Thriving in This Strange New World
Staying
In? What to watch, what to eat, and where to shop from home
OR
Heading
Out? What you need to know to stay safe when heading out