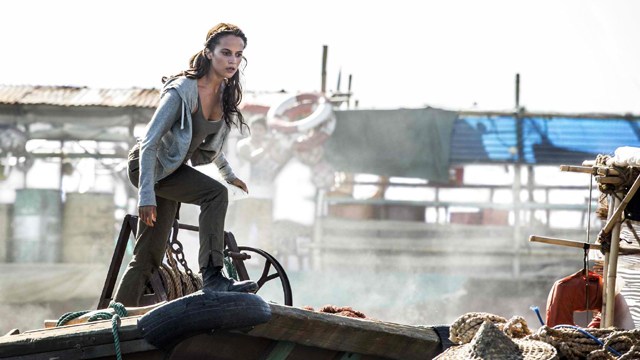 (SPOT.ph) It’s going to be a blockbuster-filled March for movie fans, with exciting titles like Tomb Raider and A Wrinkle in Time headed to theaters. Indie fans also have Sinag Maynila Film Festival entries to look forward to, and if you’re staying home, Netflix also has some new films for your next binge-watch session. Pencil in these release dates, Spotters!

The annual Sinag Maynila Film Festival is back with a fresh batch of thought-provoking independent films. One promising entry is Yam Laranas’ Abomination, which revolves around a young woman who is found unconscious. When she awakens, she bizarrely claims to have been murdered two months ago. Sinag Maynila runs from March 7 to 13 in select SM Cinemas.

Based on the 2013 video game of the same name, the new version of Tomb Raider enlists Oscar winner Alicia Vikander as a young Lara Croft. Her first expedition takes her across the globe and to a mythical island as she tries to uncover the mystery behind her eccentric father’s sudden disappearance.

Veteran Filipino filmmaker Mike De Leon returns to the big screen after almost 18 years. It stars real-life journalist Atom Araullo in his first movie role as the titular journalist in pursuit of truth. The highly anticipated movie will have a limited public screening on March 13 at UP Diliman, but details on its theatrical release have yet to be announced.

Jason Bateman and Rachel McAdams star as Max and Annie respectively, a married couple who routinely hosts a weekend game night with their friends. When Max’s brother arranges a murder-mystery party, things escalate quickly and they soon realize that the game is anything but fake.

A Wrinkle in Time

Based on the award-winning sci-fi fantasy novel of the same name, this Disney adaptation enlists award-winning filmmaker Ava DuVernay and a star-studded cast (which includes Oprah Winfrey, Reese Witherspoon, Mindy Kaling, and Chris Pine). The story revolves around a young girl named Meg and her classmate named Calvin, who embark on a dangerous journey to another planet in search of her father.

Ocean’s Trilogy director Steven Soderbergh ventures into psychological horror territory with his new film—reportedly shot entirely on an iPhone! The film stars The Crown’s Claire Foy, who has been hiding from a stalker for the past several years. She unwittingly signs up for a treatment facility where the staff begins to question her sanity.

If you loved Workaholics, you’ll have a blast with this new Netflix original movie starring Adam DeVine, Blake Anderson, and Anders Holm. In this action-comedy, the trio play friends on the verge of finally getting their game financed when their benefactor is suddenly held hostage.

Set 10 years after the events of the 2013 hit movie, this film stars John Boyega as a once-promising Jaeger pilot who has turned to a life of crime in the underworld. When a new Kaiju threat emerges, he must team up with his estranged sister, Mako Mori (Rinko Kikuchi) to save the world and live up to his late father’s legacy.

Directed by Steven Spielberg, this exciting adaptation of the 2011 novel is set in a dystopian future where the Earth’s population spends most of their time in a virtual reality world called OASIS. When its founder passes away, he joins a dangerous contest where players get a chance to win OASIS and U.S. $500 billion.